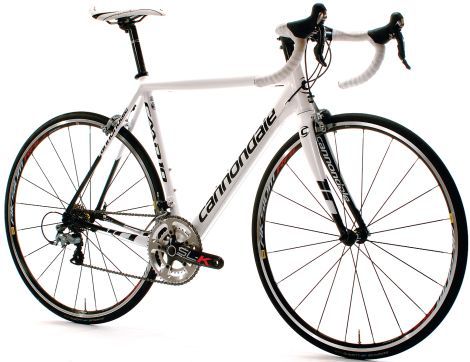 Share
Too bad the full white paint job hides the CAAD10’s true identity – the bike has a ride worth boasting about.

Cannondale made their first aluminum frame back in 1983, and in the ensuing years the company did more to advance the performance of aluminum bikes than anyone else. That was before, like everyone else, they too jumped on the carbon bandwagon. The funny thing is, while Cannondale carbon bikes were making waves and winning the Giro d’Italia, the company continued to sell a bunch of the ferrous frames. In fact, Cannondale’s aluminum business continued to do so well that for 2011 they decided to scrap the old design and start blank. Aluminum bike fans can now feel free to party like it’s 1996!

Although aluminum frames once sat atop the popularity tree in the peloton and won plenty of races, the mere fact that they aren’t fashionable now doesn’t mean that they don’t make for good bikes. How does the most modern version of an aluminum bike compare in 2011? 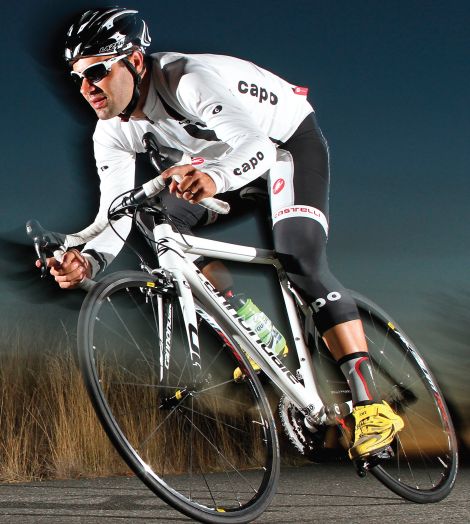 THE FRAME
Aluminum may seem like an outdated frame material, but don’t tell that to the newly designed CAAD10 frame. By upgrading the aluminum from the previous 6061 to the 6069 and cutting almost 200 grams off the CAAD9 that preceded it, Cannondale claims that the new frame weighs in at 1150 grams. Also worth noting is that the frame is as chock-full of details as any modern-day carbon frame. Both the frame’s newfound weight and performance are gleaned from a handful of changes, as Cannondale nixed some former signature design elements while embracing new ones. Gone are both the hourglass seat stays and the Power Pyramid downtube. Interestingly, Cannondale used some frame elements from their carbon models (the S.A.V.E. stays and a flattened top tube from their Flash mountain bike) to round out the CAAD10 frame.
Additional details worth noting are the offset dropouts on the full carbon fork, which are intended to gain some additional compliance. With the idea of maximizing power transmission, the CAAD10 runs with asymmetrical chainstays (taller and square on the drive side). Since it was Cannondale that pioneered the design, don’t be surprised to find a BB30 bottom bracket joining the set of flared tubes. Freed up from the cost of expensive molds needed to make a frame, it’s nice to see a full size run of eight frame sizes (48cm-63cm) made available. 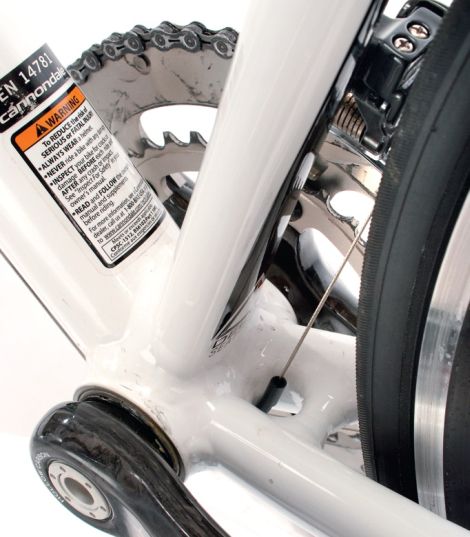 You’d be forgiven to not know what welded tubes look like.
THE PARTS
There are four different levels of CAAD10’s available in 2011. Our CAAD10 3 test bike is one down from the high-end side of the lineup, and it was spec’ed with a variety of solid parts, namely, Mavic Aksium wheels and a Shimano Ultegra drivetrain. ‘Light action’ remains the key function with the Ultegra shifters, which consistently delivered reliable shifts under all conditions. As has become common practice by companies looking to find ways to lower the cost of their bikes, there’s been some minor mix and match of the parts with the CAAD10, as evidenced by the Tektro brake spec versus the Shimano Ultegra binders you might expect to find.
The other part of the CAAD10’s drivetrain package is the carbon FSA SL-K cranks. Not only are these cranks very good looking, but they are also more than stiff enough to deliver the goods with each pedal stroke. All cockpit parts are handled by Cannondale’s own inhouse catalog with the 27.2-millimeter seatpost topped off with a Prologo saddle. 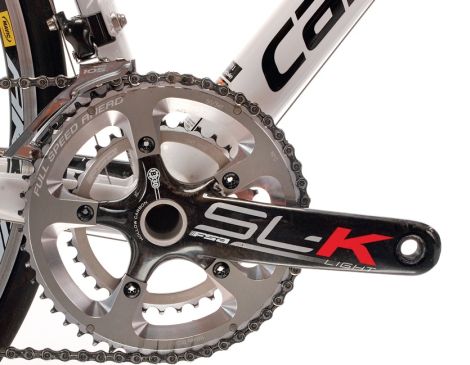 Besides the fork, the only other carbon found on the bike is the FSA crank.
THE RIDE
Did the CAAD10 ride like a carbon bike? No. Should it? No. Like every other material used to build frames, aluminum has its own ride quality, which stands apart from steel, titanium and carbon. Due to the oversized tubes and a tapered head tube up front, the Cannondale loved to ride hard into turns and pedaled just as hard coming out. The CAAD10 was responsive, but not too twitchy. The fact that the bike uses the same geometry as their high-end carbon bikes gives you an indication of how the bike will handle; in other words, its race-inspired geometry has been refined to make an all-around balanced bike. The BB30 also contributes to the impressive power transfer. The frame stiffness seems comparable to a good carbon frame, but you do notice a difference when you hit some bad pavement or rougher roads. You feel more vibration and feedback from the road compared to most carbon bikes. 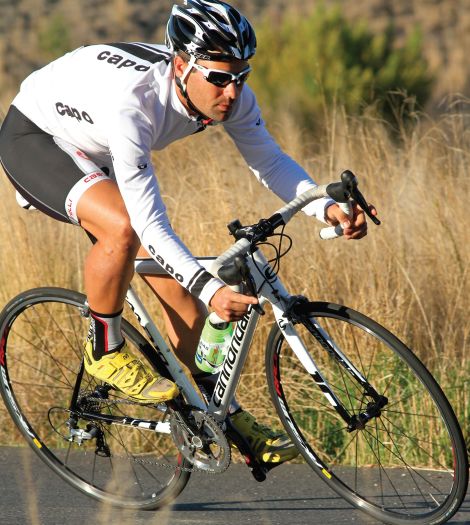 THE VERDICT
The one thing that a few test riders wondered about was the CAAD10’s paint job. Although the extra cost is probably the reason, it was a shame that the tipto- tail paint job didn’t allow any of the bike’s celebrated aluminum pedigree to shine through. It would be cool to see some of the polished frame on the seatstays, at least, if only to make a point to all the carbon riders out there that they can still get beat by a metal bike!
The two words that kept coming to mind while riding the CAAD10 were performance and price. This is a lot of bike and performance for the money. It’s impressive to find the same frame and full carbon fork on all four price points. It has a good price point within the Ultegra group and is probably a better value than a carbon bike in the same price range. The ideal buyer would be a midto entry-level racer or competitive group rider who wants the sure feel of alloy and doesn’t mind feeling some road vibrations.
STATS
Price: $2150
Weight: 18.1 pounds (size 54)
www.cannondale.com

A day at Paris-Roubaix

‘Tis The Season To Blog Or Not To Blog