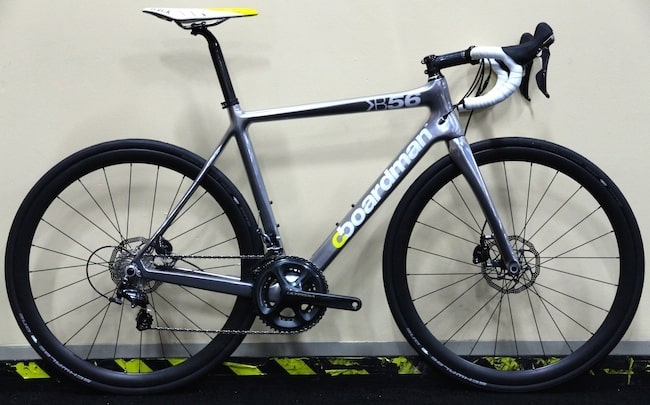 In case you missed it, be sure to check out Road Bike Action‘s first round of Interbike coverage here. Boardman Bikes has been making a big splash in North America over the past year, and the brand continues to develop new models with the guidance of company founder and namesake, Chris Boardman. Up next on the docket is a disc brake-equipped road bike. It’s tentatively titled the ‘SLS Disc,’ but the prototype displayed at Interbike had its top tube emblazoned with the company’s early sample code lingo: ‘>B56’ translates to ‘Beyond 56,’ referring to Chris Boardman’s collection of 56 professional wins and the brand’s aim to continually reach for new achievements. The SLS Disc will come with a unique thru-axle design as well as a swappable rear dropout that can convert to a traditional quick-release skewer. Availability is set for Spring 2015 with several models priced in the realm of $3000 to $7000. 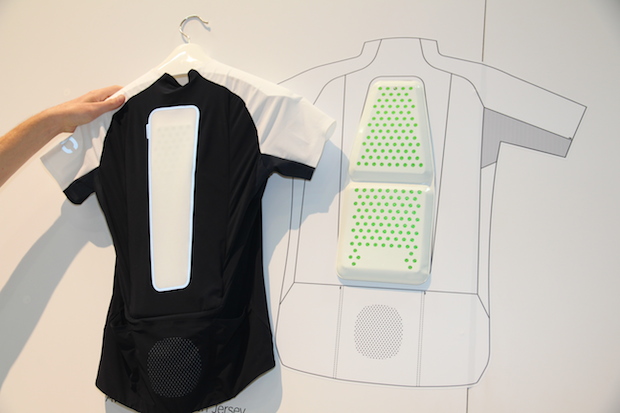 Last year, Swedish company POC launched a full line of road cycling products including the highly stylized Octal helmet and a range of high-visibility clothing. At Interbike this year, the brand showed off a very unique new garment: a road jersey with integrated back protection. Set to retail for $200, the AVIP Backprotection Jersey features a removable section of Koroyd material, which is a honeycomb-shaped structure that has recently been utilized by Smith in its Overtake road helmet. POC actually told us that the company looked into utilizing Koroyd in its line of ski helmets seven years ago, but decided to take a different path for that product line. The Backprotection jersey features the same high-end materials and quality found on the rest of its line, while the minimally-invasive Koroyd insert is designed to help protect your spine in the event of going over the handlebars in a wreck, or in any instance where your back may contact the asphalt. 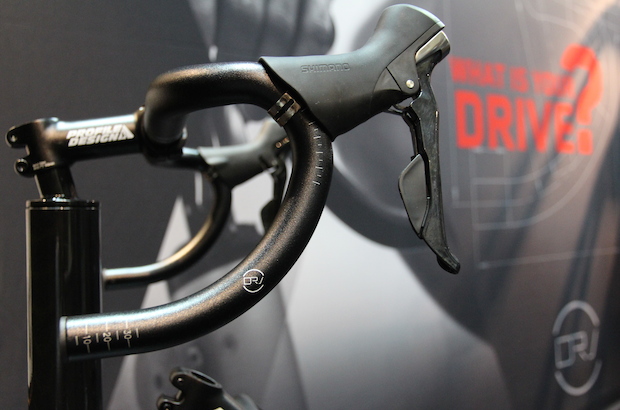 Profile Design has offered a terrific line of road bike wheels for some time, and this year at Interbike the brand unveiled an all-new range of handlebars and stems. Priced at $70, the DRiVe range of handlebars is made up of three distinct drop measurements (105mm, 120mm and 135mm), with each of those coming in three different overall widths (40cm, 42cm, 44cm-center-to-center from the brake hood areas). The top section is a simple, round 31.8mm-diameter, while the bar’s various curvature and aforementioned drop measurements were brought about through Profile Design’s research in the correlation between various body metrics, such as hand width and shoulder width. The first generation of Profile Design’s DRiVe bars will be available in aluminum, while future iterations are expected to be available in carbon as well. 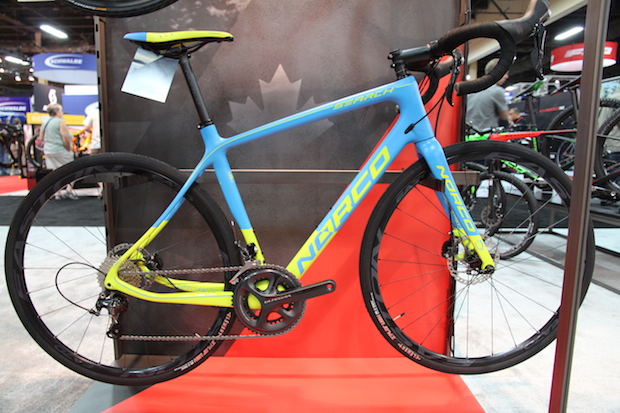 Norco offers a wide range of mountain, road and cyclocross bikes, and new for the 2015 model year is an all-new ‘adventure road bike.’ Called the Search, the new bike features relatively relaxed geometry, an emphasis on frame compliance for an overall comfortable ride quality, and plenty of tire clearance. Three carbon models will be available from $2110 to $3700, including the above Search XR build with a Shimano Ultegra 6800 groupset and RS685 hydraulic disc brakes. There will also be three steel versions on offer, starting at $885. 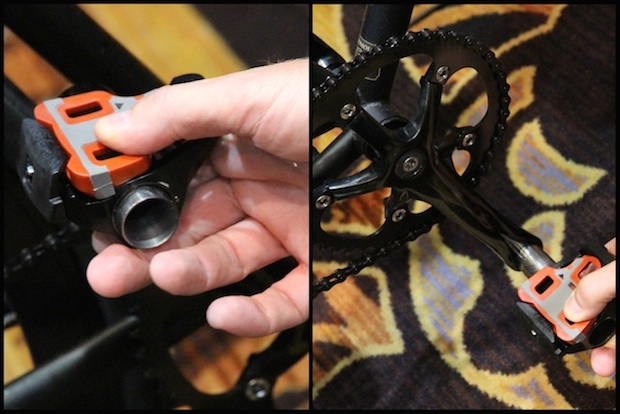 One of the most unique new products making its debut at Interbike was the Nikola pedal, the first of its kind to offer a very specific lateral movement. The initial offering will provide 25mm of left-to-right movement for your foot over the pedal’s spindle. But rather than simply creating a pedal that can freely float across the width of the spindle at will, the Nikola pedal instead is built on a spiral mechanism that only allows said movement to occur when the pedal is rotated. And this movement can be fine-tuned by the rider or a bike fit specialist. For example, if you want a wider Q-factor at the bottom of your pedal stroke (above, right), then the corresponding upstroke will see the pedal move inboard (above, left). And while the concept seemed like it would have a decidedly uncomfortable feel to it (at least, initially), we hopped onto a stationary trainer to try it out and found the movement very natural. We guess that it won’t be a must-have product for most cyclists, but should appeal to plenty of folks out there with unique knee problems or other pedaling issues. Although, it’s worth noting that Nikola claims that the pedals offer up to a 7% increase in your peak power output. We can’t wait to get a sample set to test-ride. 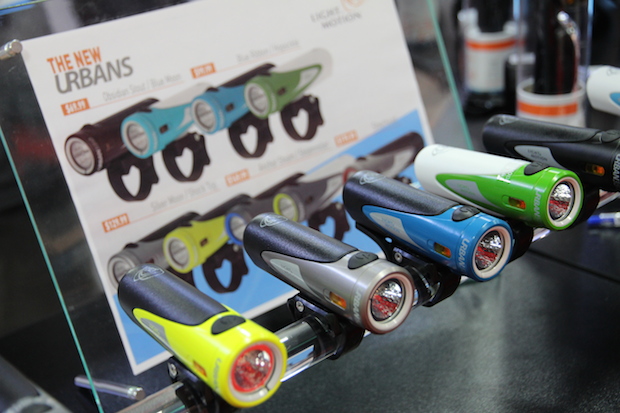 Light & Motion still produces its line of lights inside the company’s Monterey, California headquarters. New for 2015 is an updated version of the brand’s popular Taz light that will feature 1500 lumens of darkness-fighting power. Light & Motion is also released a re-vamped line of its popular Urban lights with new colors and materials, as well as a wide variety of power outputs and price ranges. The new Urban lights are also fully submersible to three feet of water, an attribute brought about by the company’s long history in manufacturing scuba diving lights. 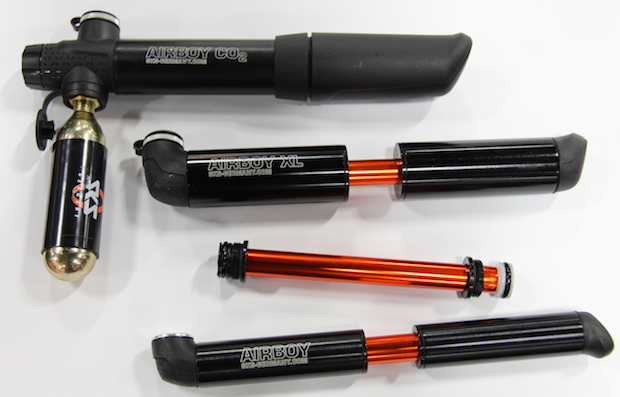 SKS Germany is one of the world leaders when it comes to bicycle pumps, fenders and other accessories, and the brand continues to refine many of its products each and every year, along with releasing plenty of new items on a regular basis. This year at Interbike, the folks at SKS showed off a new range of minimalist handpumps called the Airboy. Easily packable inside a jersey pocket, the standard Airboy can quickly inflate a tire up to a level capable of getting you home after a flat. Likewise, the Airboy XL was designed for the same purpose, except with an extra amount of volume capacity for mountain bike usage. Both pumps retail for $29.99, and they’re easily some of the smoothest, sleekest and most comfortable handpumps we’ve come across. There’s also an Airboy with an integrated Co2 inflator ($39.99). 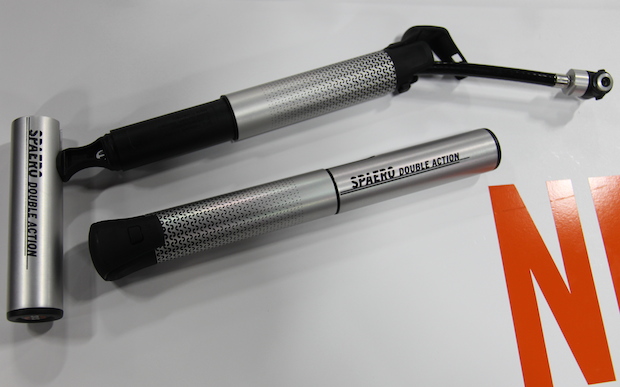 Another great new product that SKS Germany was showing off at Interbike was the Spaero Double Action handpump, which the company described as ‘the most efficient handpump we’ve ever produced.’ The lightweight body disassembled and re-configures with a dedicated, easy-to-hold handle, and there’s also an extensive hose with a 90-degree-angled inflation head. Best of all, the Spaero Double Action gets its name from the fact that it inflates on both the downstroke and upstroke, resulting in a much quicker inflation process. 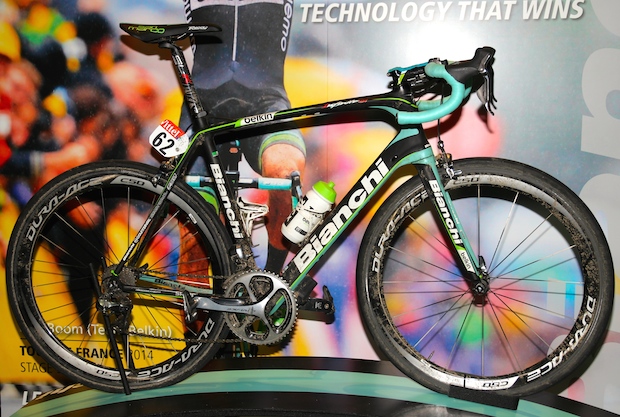 There were plenty of great-looking race bikes on display in the halls of Interbike, including U.S. National Road Race Champion Eric Marcotte’s stars-and-stripes-themed Wilier Zero.9. Another bike that caught our eye was in the Bianchi booth: Belkin rider Lars Boom’s winning bike from Stage 5 of this year’s Tour de France. The Bianchi Infinito CV was still caked in mud from that day’s rain-stoked and cobble-filled stage.