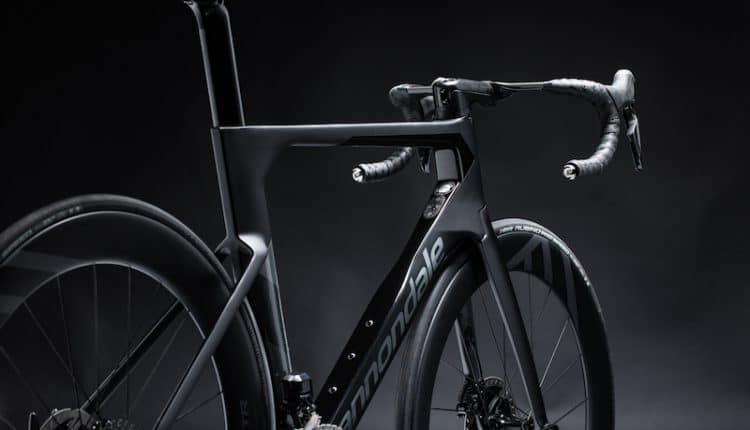 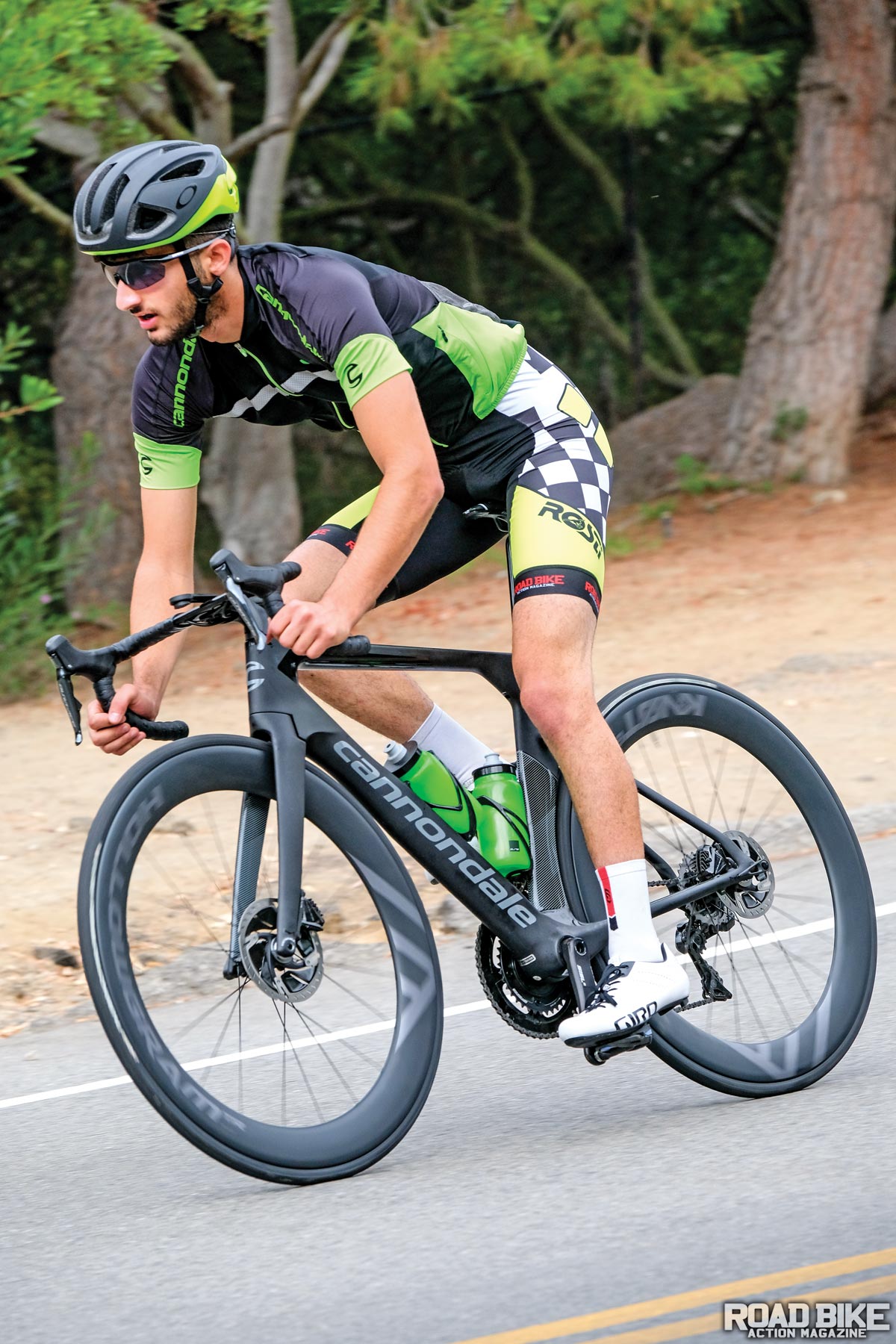 Talk about a do-over; Cannondale’s new SystemSix is a far stretch from the road bike (standard aluminum rear end mated to a carbon front triangle) that initially bore the model name. For all-around road duties, the popular SuperSix EVO became the bike of choice in the Cannondale catalog.

For 2019 Cannondale has rolled out the old name attached to a completely new bike, one that Cannondale elaborately points out in their “white paper” that has been plotted to account for every aspect and direction of wind. This is a ground-up new design that’s delivered a frame with very purposeful angles, curves and shapes.

As best we can remember, Cannondale was the earliest adapter of the System Integration design concept, and they splashed the words all around their catalog of bikes. The SystemSix is definitely a bike that can rightfully boast of such design characteristics. Just looking at how the fork mates with the downtube is really eye-catching.

Like all the bikes in this test, the Cannondale runs with fully integrated cables; however, it is not dedicated specifically to electronic drivetrains. The front brake hose is routed through a unique external shell that sits off the head tube.

One deceiving aspect of the bike are the faux thru-axles. The SystemSix is the first test bike we’ve ridden with a version of Mavic’s Speed Release thru-axles that actually rely on slotted dropouts for (as the name implies) faster on/off use.

We like the three bottle-mount options with two on the downtube—one (higher) for easy reach and one (lower) for less airflow interruption. 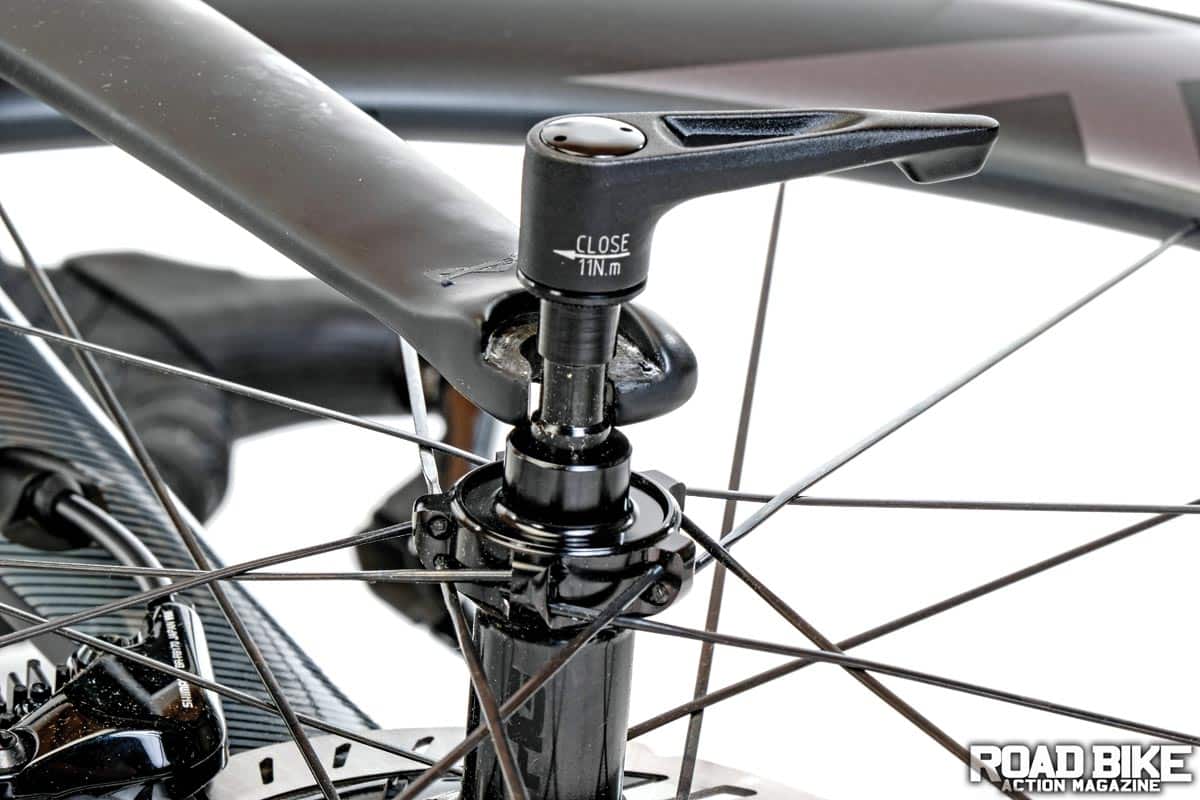 The high-end model runs a Shimano Di2 Dura-Ace drivetrain with the addition of an SISL2 crank and Power2Max power meter that needs a computer (and an activation fee) to be a useful training partner.

At first glance we were put off to see 23mm tires mounted on the 64mm-deep HollowGram Knot wheels. But, as part of the new-age benefits of wider-wheel trickery, thanks to the 21mm internal width of the rims, the Vittoria Rubino Pro Speed tires are expanded out to a more robust 25mm width. The carbon hoops run a 20/24 front/rear spoke count, are tubeless-ready and are slowed by Shimano hydro disc brakes.

Designed to maintain an efficient aero tuck, the Cannondale handlebars are on the narrow side.

Like all the other bikes tested here, the Cannondale relies on an integrated handlebar/stem combo of their own making. Sharing the new Knot brand name, the aluminum stem clamps a purposely narrow (39cm top/40cm at the drops) aero carbon bar with a minimal amount of rotational adjustment. The aero seatpost is topped off with ProLogo’s version of the new-style shorty saddle. 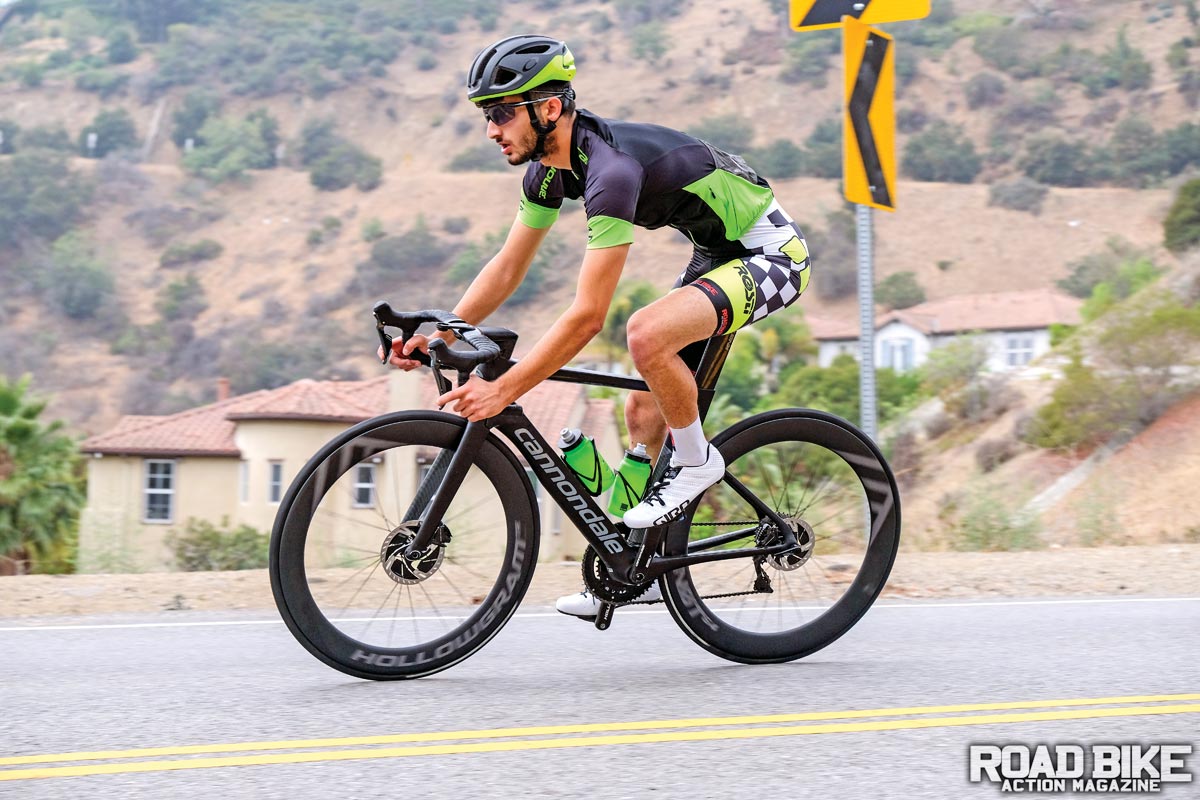 The SystemSix is essentially an aero SuperSix with updates that bring it up to current standards. The geometry charts are nearly the same other than the position of a few tubes to optimize the aerodynamics. On our first ride we spent about an hour fussing around with the Power2Max NG Eco power meter; we were getting cadence but no power numbers. After switching computers a few times, they all had the same result. Turns out the power meter is shipped without the firmware to deliver power, and to get it, you have to shell out another $500 for the Power2Max firmware.

It looks and works like a standard thru-axle, but the Mavic Speed Release system still uses a slotted dropout for quick changes.

After realizing that our glorified cadence sensor was not going to offer us any power figures, we finally hit the road. First thing you notice is how incredibly stiff the bike is. No matter what speed we were going, we felt like we were going fast and on the edge. Initially, we thought maybe we put too much pressure in the 23mm tires that measure 25mm on the wide rims.

After dropping a few psi (down to 80 psi in the front and 85 in the rear), the sensation was still there with almost no noticeable difference. This feeling is fun and exhilarating but made it difficult to feel when we were truly on the edge pushing its limits. The loss of SAVE tube shaping (what Cannondale calls “micro-suspension” better understood as effective compliance) means that the rear end of the SystemSix is stiff and tracks much better than the SuperSix. 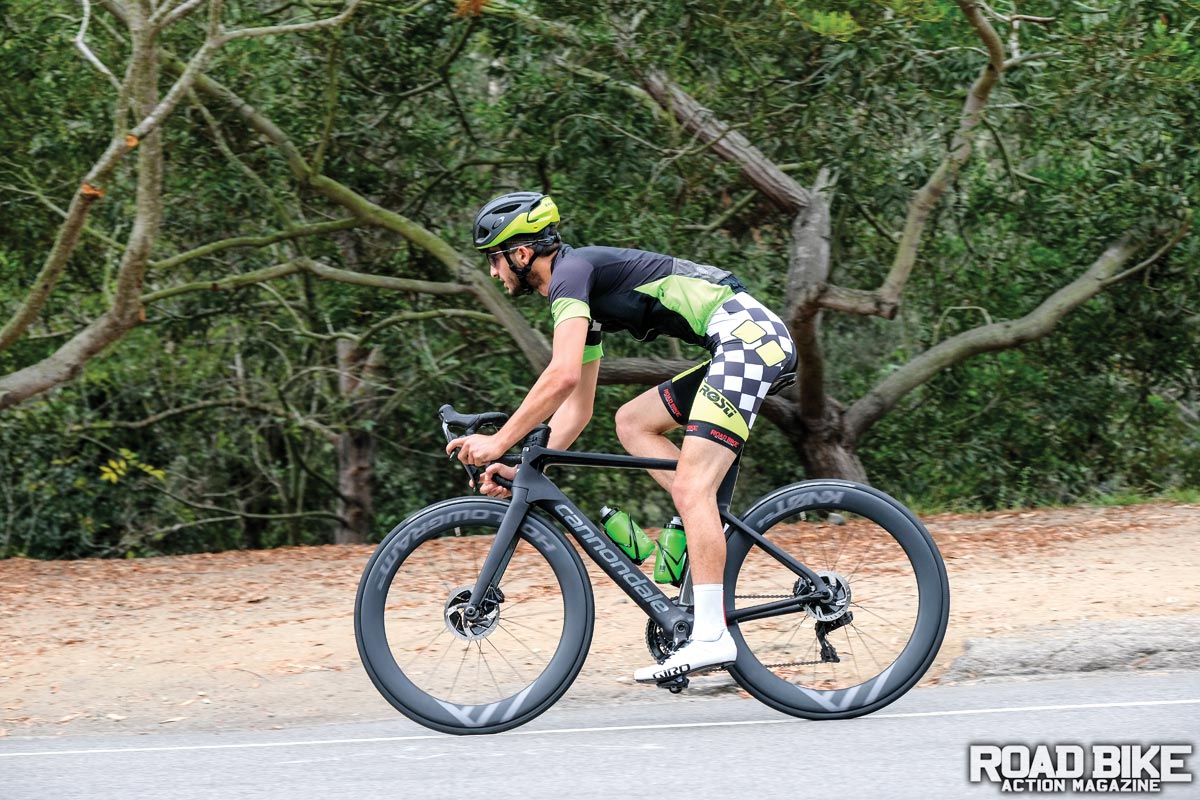 We got in trouble on a few occasions while descending as we pushed the bike harder and harder trying to see if we could feel that point where things started to get loose. The handling is responsive and predictable, but the amount of road feedback you get makes it very difficult to decipher that transition between too much and just enough. Let’s just say it sure does deliver an exciting ride.

The bike is stiff everywhere, and we wouldn’t describe it as compliant in any way. Climbing feels very efficient, and the power goes straight to the ground. Long in-saddle efforts do take their toll due to the lack of compliance, but the racer in us didn’t mind on rides under 75 miles.

As much as we understand the aero science behind a narrow front end, that didn’t take away from having to get used to such narrow handlebars.

One of the unique things about aero bikes is the psychological impact that riding them can have on the rider. The bike is intended to be fast. It looks fast and, quite often, it can feel fast. That, in a nutshell, defines our experience with the SystemSix. Judging from the reaction the bike received in the group rides, the Cannondale was deemed fast just by looking at it. As one fan of the design said, “If Batman rode a bike, that would be it!”

We were struck by the fact that Cannondale opted to not utilize any of their popular SAVE tube shapes with this bike, despite being found on their Slice triathlon bike. As such, the ride quality, along with the rider position, contributes to a very serious and fast feel, just not one that would be our first choice for a 100-mile-long Gran Fondo.

It’s nice to see that Cannondale expended the extra effort to create a family of five SystemSix models that start at a $4000 entry-level version.