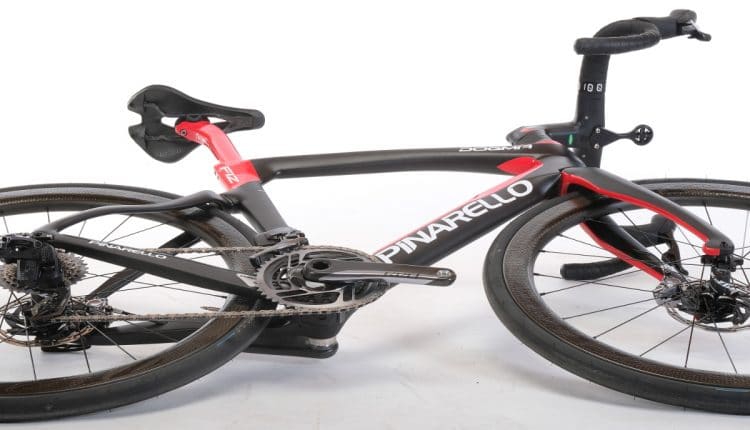 The truth is, what Team Ineos doesn’t  know probably won’t hurt them. Aboard the new Pinarello F12 in the Tour de France as they are, it’s a wonder to us why they give up the benefit of the proven stopping performance  of disc brakes versus the slowing power of their old-fashioned brakes (aka rim brakes), but given that they’re still aboard one of the best performing bikes we’ve ridden of late, we’re sure they’ll still find a way to find success in Le Grand Boucle.

Pinarello is of course one of the most famous of Italian legacy brands and the F12 follows in the footsteps of the F8 and F10, the latter which has enjoyed an especially successful Grand Tour run of victories.

“Striking” is definitely one of the first words that come to mind when you first cast your eyes on the F12. More than almost any bike we’ve ridden on the Montrose group ride, the Pinarello would receive consistent attention and comment. In short, the carbon frame is a looker.  Yes, Asian made but finished off at the Pinarello factory in Treviso, Italy, the highest-end model in the catalog maintains Pina’s longtime use of the best Toraya carbon that money can buy. 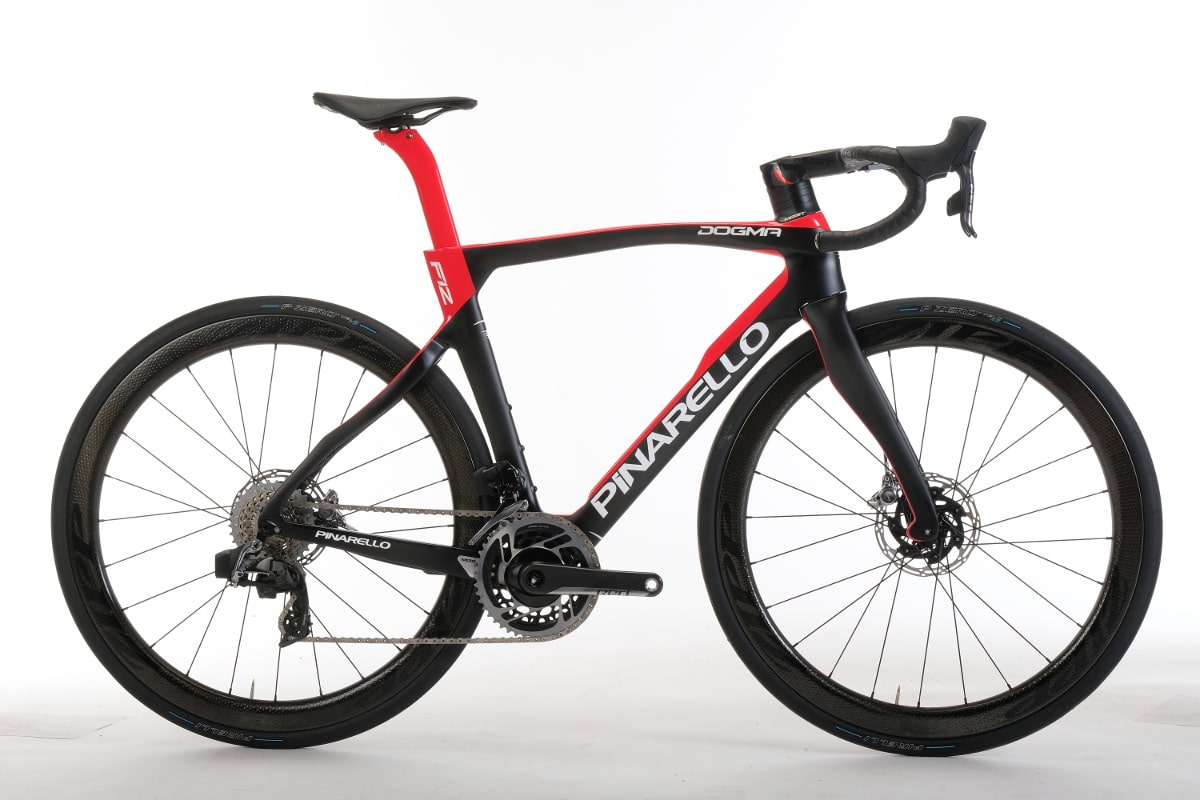 Our test bike was an example of the $13,500 complete model that’s equipped with a SRAM eTap AXS drivetrain with Zipp 303 wheels and a trio of Pinarello’s in-house brand Most seatpost, short saddle and improved upon Talon Ultra one-piece bar/stem combo. It’s this last component which Pinarello is most proud of as it does well to not only increase the aesthetic appeal of the bike by hiding all the cables, but according to Pinarello, it’s also aids in the bikes aero efficiency.

If the $13,500 tab is too high for you, there is also one other “cheaper” version available – the $12,000 model built with a Shimano Di2 Dura-Ace. Still too tall? Luckily, the frame is available for $6500 which is pretty standard for a bike of this lineage. As thoroughly modern as the frame design is, the F12 can still be had with old-fashion brakes as used by Team Eneos. If only they knew!

In typical Italian “mind-the-details” legacy, the F12 is available in 13 different sizes  with your choice of a whopping 16 different bar/stem combo sizes.  Our test bike rolled off the scale at 17.65 pounds. Pinarello claims a raw frame weighs 840 grams. As you might expect, the F12 uses an Italian threaded bottom bracket so there are no fears of the pressed-in squeaks.

THE RIDE
First and foremost, Pinarello’s have never been known as lightweight wonders. Our F12 test bike was nudging half-past 17 pounds w/o pedals which is not bad, but still giving away close to two pounds over a handful of other carbon race bikes with disc brakes.

The best part of the bike is the handling. The bike feels tall,  but the F12 still handles like a dream
It’s not the slippery eel in a straight line like the BMC Timemachine but the BMC is a one-trick pony: a funny bike with road bars. The F12 is a complete bike. Three bottle cage mounts provide options and reaffirm the idea that a bike can be faster with bottles on it if you design it right. But they have to be low (and harder to reach).

As it was intended to do, the 12-speed AXS drivetrain with a 46/33t chainring combo allowed riders to stay in the big ring for longer periods which, yes, was and is a good thing.

Look we get the weight thing, but we also embrace the reality that disc brakes are superior in every measure of performance over caliper brakes. In its current form, the Pinarello F12 is as capable of going fast as it is slowing down – we like that. And, with Julian Alaphillipe currently having his way with Team Ineos, it’s certainly hard to argue that Geraint Thomas has any advantage with the old-style brakes.

IN THE WORDS OF ONE TEST RIDER
“The bike is beautiful! Everyone commented on it. It’s a Ferrari on two wheels. No doubt most (all?) of the curves are style and not optimal design but it’s a freaking *Pinarello*, not a CAAD 12.  Why torx bolts on the seat post? That seems odd. The AXS gruppo has swung me from a SRAM hater to a lover all in one fell swoop. Move over Di2, there’s a new sheriff in town.”