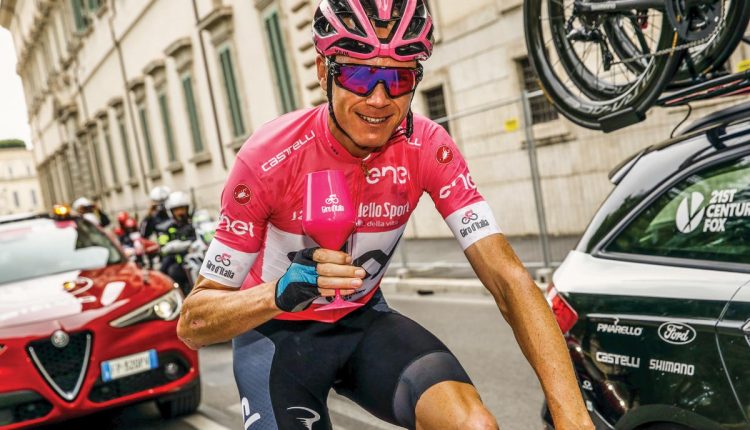 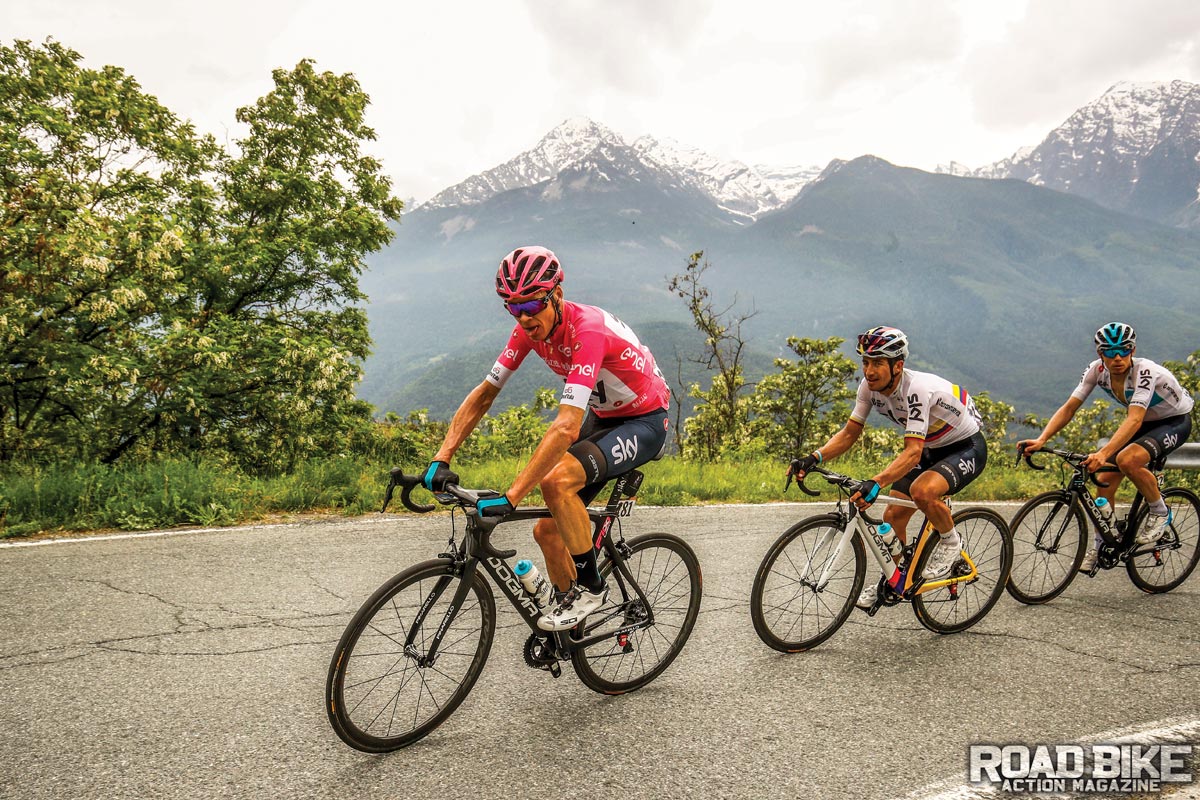 WHO’S UP FOR  ITALY IN MAY?

The good news for the riders was that after the 2018 edition, which saw riders starting the three-week-long race in Israel, the 2019 running of the Giro d’Italia only jumps over the border into neighboring San Marino for a time trial.

The bad news for the handful of riders who might be contemplating doing the historic Giro/Tour double is that there is a shorter gap between the end of the race in Italy (on June 2) and the start of the race in France
(on June 29). 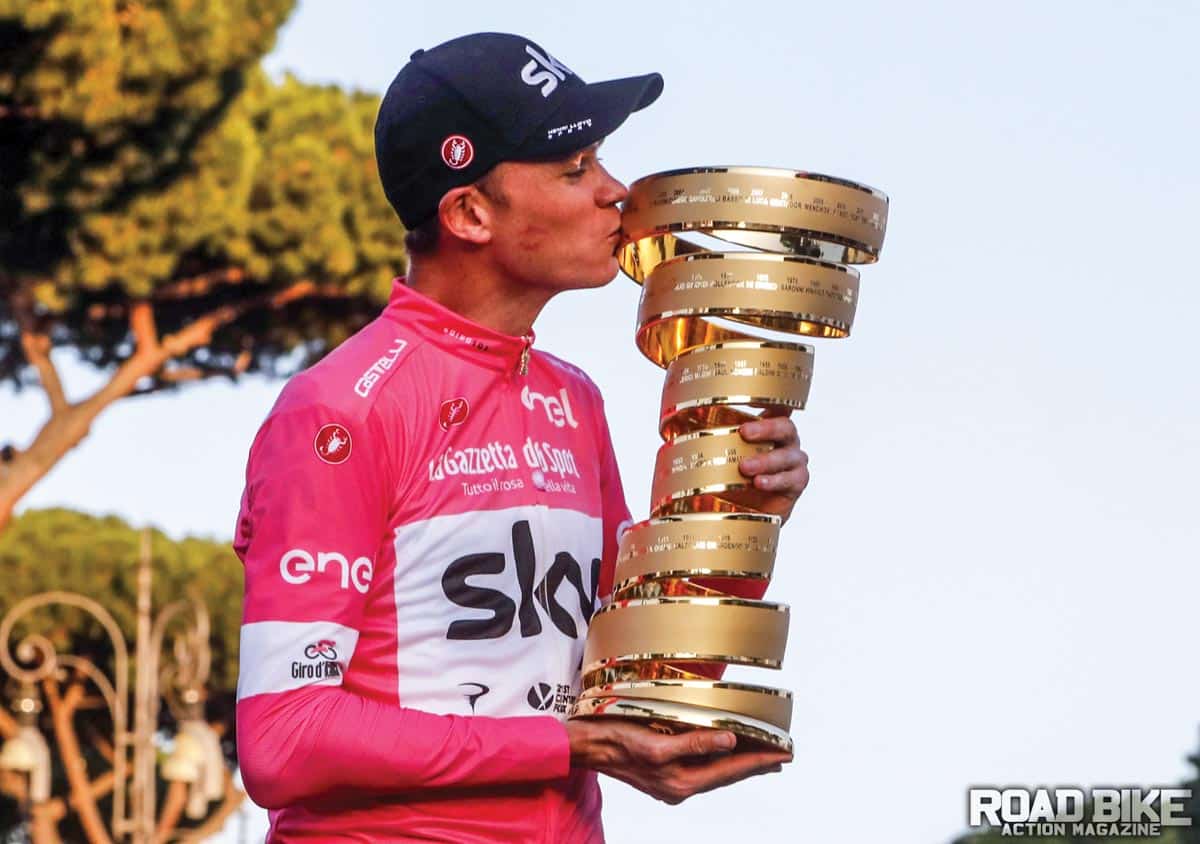 With less than a month to recover, 2018 Giro winner and four-time Tour winner Chris Froome wasn’t so sure about repeating the double effort again. “I’m not 100 percent sure if I’ll be there at the Giro d’Italia. It’s a decision
we’ll have to make,” said Froome, who appeared onstage during the presentation.

“The pink jersey for me is a great honor,” said the British rider. “It had been missing from my collection. It was an important jersey for the history of cycling, and something I had dreamed of as a child. It’s also an important race for the team, as it’s the 10th anniversary of Team Sky. We’re all together at our training camp, so I think in that period we will decide everything for the year,” he added.

This year’s race will cover 3,518 kilometers and starts with a tough 8.2-kilometer time trial in Bologna and then heads southwest to Fucecchino and into Tuscany. Eventually, the riders will tackle climbs, including the Passo Gavia at 2,618 meters high on Stage 16 and Passo del Mortirolo with a total of seven summit finishes between the Dolomites and Alps.

“It’s a brutal, brutal second half,” added Froome. “A very organized team will be needed too. The stage with Gavia and Mortirolo is a beast! It comes after a rest day, and that day the true champions will stand out from the bunch.”

• May 19, Stage 9; Riccione – San Marino (time trial): A hilly time trial from the Adriatic coastal town of Riccione to the Republic of San Marino will test the climbers before the first rest day. The route is winding and undulating for the first 22 kilometers up to the border of San Marino. The only stage outside of Italy  before running uphill all the way to Fiorentino. The climb is particularly suited to rouleurs/climbers.

• May 25, Stage 14; Saint-Vincent – Courmayeur (Skyway Monte Bianco): This is a very short stage (131 km) featuring five categorized summits. Racers ascend the Verrayes, Verrogne, Truc d’Arbe and Colle San Carlo before the summit finish in Courmayeur. The riders will need to pace themselves over the Colle San Carlo for 10.5 kilometers with a gradient of 9.8 percent. 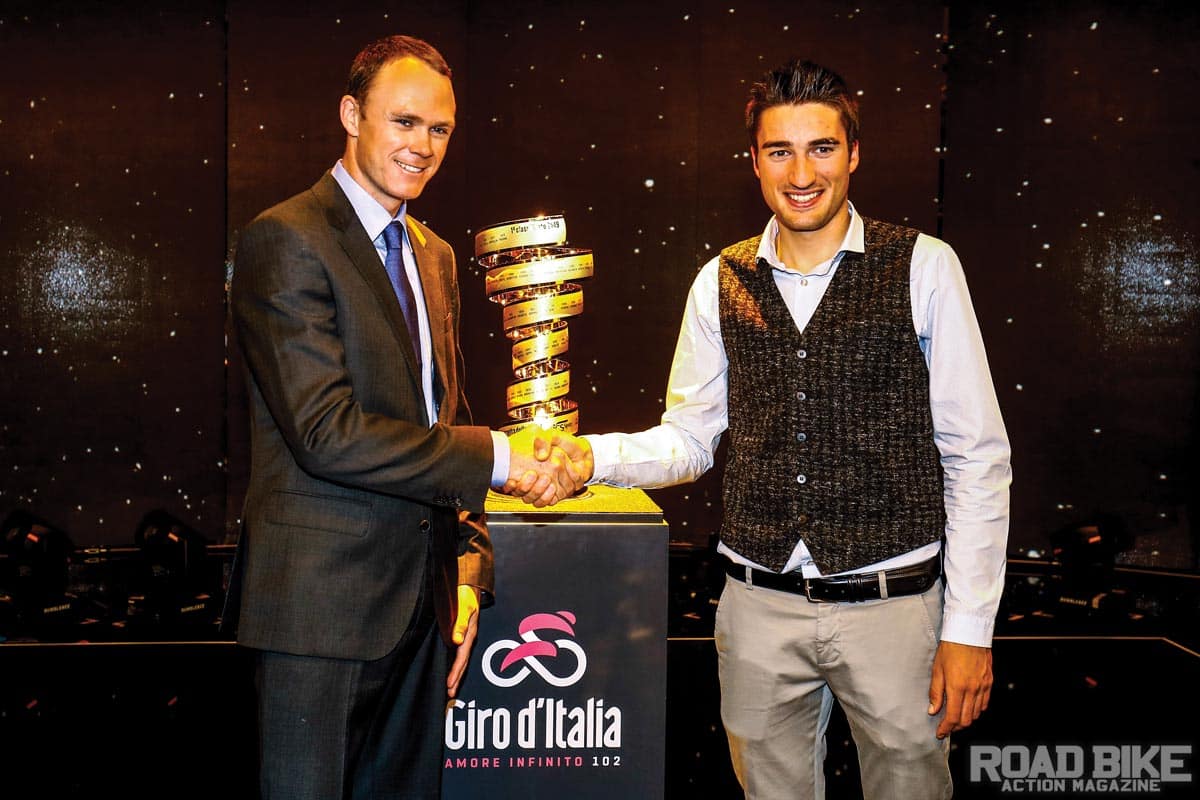 • May 28, Stage 16; Lovere – Ponte Di Legno: The final week of the race kicks off with a vengeance, with the Passo Gavia the highest point of the Giro at 2,618 meters high. This is the queen stage across the Alps with a 5700-meter elevation over 226 kilometers. The route includes climbs up Passo della Presolana, Passo Gavia and Passo del Mortirolo that should widen the gap among the contenders.

• June 1, Stage 20; Feltre – Croce D’Aune-Monte Avena: The final uphill battle will take place on the penultimate day, with over 5000 meters altitude to climb over 193 kilometers in the Dolomites. Starting in Feltre, with climbs of the Passo Manghen (2,047 meters), Passo Rolle and culminating with the climb of Croce d’Aune. The last summit finish features long climbs, over 15 kilometers, with gradients of up to 12 percent.

FROOME LOOKS TO CAVENDISH AS INSPIRATION FOR TOUR SUCCESS