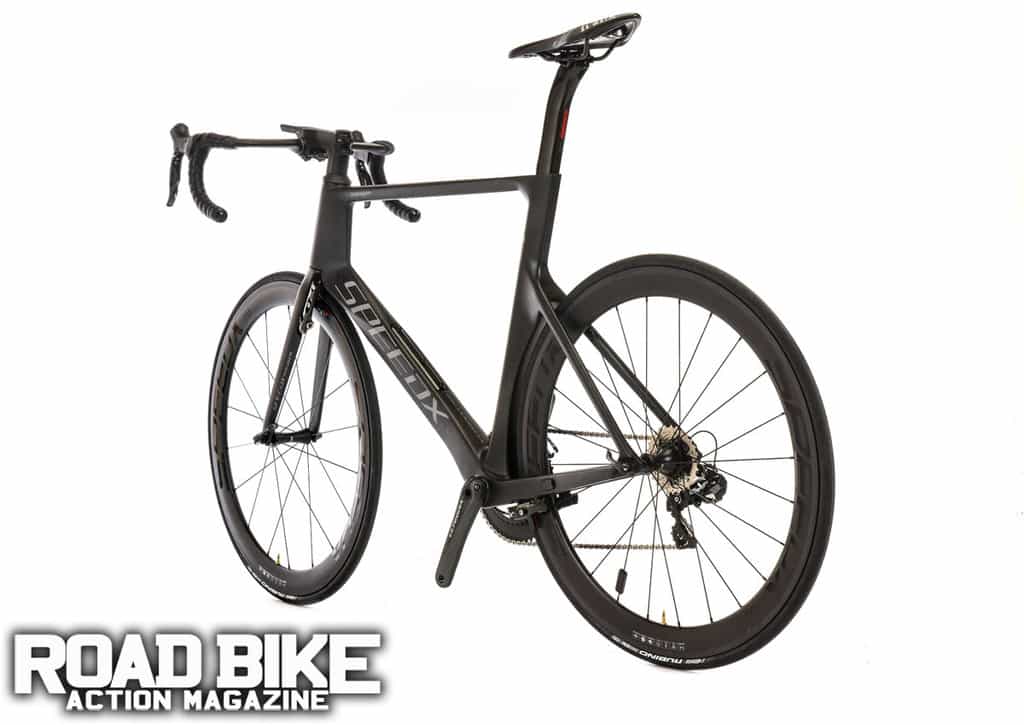 It’s quite likely that SpeedX is the most popular bike you have never heard of, yet your tech-gadget, non-cyclist buddy probably has, considering they already have more coverage on tech sites than cycling ones. Less than two years ago SpeedX started a Kickstarter campaign for what would be their first bike model, the Leopard, an aero “smart bike” design with an integrated computer and fully internal cables. Their goal of raising $50,000 was met after just two hours, and after a month, more than $2.3 million was raised. SpeedX went on to be the most funded bicycle in the history of Kickstarter. So, who are they?

FROM APPS TO BIKES

SpeedX took a rather unique path to becoming a bike brand. The Chinese company’s founder was a phone-app developer from outside of the cycling industry, but he did enjoy riding. As the story was told to us, he was underwhelmed with the technology available to cyclists to connect with the bike. After developing a cycling app, the company turned their attention to making the SpeedForce computer that was integrated into a stem and could be added to any bike. With that technology in hand and the desire to push how technology could be further integrated into bike design, SpeedX developed the Leopard smart bike.

The SpeedX Leopard is as much a tech piece as it is a bicycle, with complete integration of a computer called Smart Control into the stem and a taillight built into the seatpost that is controlled by sensors on the bike and through the SpeedX phone app. We’ve seen a few concept bikes with this level of integrated gadgetry, but SpeedX is the first to bring it to market.

The computer itself isn’t all that different in terms of features that Garmin offers. It has GPS and all the standard ride data one would want, in addition to weather and notifications when paired to a smartphone via Bluetooth. Mapping and turn-by-turn navigation will also be added, likely by the time you read this. Toggling through the multiple data-field screens on the computer is done by pressing down on the stem cap, which doubles as a button. Charging both the light and the computer is done through a port in the seatpost.

Part of the SpeedX app includes their own Strava-like mileage leader board, goal setting and challenges, which will have to be enough for users since sharing to a third-party site, such as Strava and Training Peaks, is not possible. SpeedX did say they plan to have an update that would allow them to play nice with third-party sites.

BUILDING A BIKE AROUND A COMPUTER

SpeedX told us they’ve invested $50 million of private funding into their own factory and R&D center, which has resulted in Leopard rolling out to the Kickstarter investors on schedule, and is currently available for order online.

The Leopard frame features aero tube shapes throughout and TRP rim brakes placed behind the fork and under the chainstays to further minimize drag. The more impressive features of the bike are the internal-shifting wire and brake-cable routing. Other than the short run of wire from the frame to each of the Di2 derailleurs, everything else runs internally through the handlebars, stem and head tube. The result is an exceptionally clean and uncluttered appearance.

Most everything on the Leopard Pro, outside of the Shimano Ultegra componentry, is from SpeedX, including their own 50mm-deep carbon clincher wheelset, carbon handlebar and proprietary seatpost. The left chainstay even has a cadence sensor built in, just as Trek and Giant have on some of their models. The one thing that was noticeably absent was the lack of power-meter integration. Yes, that would have of course upped the price, but it’s a noticeably absent feature that could have added a broader appeal.

Four models have already found their way into the SpeedX lineup, and all have very attractive pricing for the level of build. The Leopard has a Shimano 105 group and a price of $1699, while the Leopard Pro features Ultegra Di2 and 50mm-deep carbon clinchers for $3199. The least-expensive road model is the Leopard aluminum that uses the same aero frame shaping and computer integration as the carbon-framed models, with a Shimano Tiagra group, hydraulic disc brakes and a price of $1199. There’s also a hardtail mountain bike in the line called the Mustang for $999. SpeedX told us a higher-end model than the Leopard Pro will be released in 2017.

SpeedX’s business model is based around being a consumer-direct brand rather than using retail shops, which is why the prices are surprisingly low considering the level of components and features that hadn’t been done on a production bike up until now. This business model can save someone money and make the purchasing process easier, since you’re just a couple clicks away from buying a bike when on the SpeedX website.

As we know, though, purchasing a new bike isn’t the same as ordering a new laptop or camera, and pure convenience shouldn’t be the deciding factor in its purchase, especially when dealing with proprietary parts on a brand that isn’t going to be supported in any local bike shop.

TAKING A LEAP OF FAITH

Unfortunately, the more integration there is, the bigger the headaches are when things break. Being at the mercy of the company years down the road could be rather unappealing for many of us, especially when it comes to the computer and need for firmware updates in order to keep it relevant for years to come. One would need a lot of faith in the new start-up company to make that investment.

The overall design of the Leopard Pro will surely push development throughout the industry and further drive advancements in integrating Silicon Valley tech into our bikes. SpeedX already has a head start on the rest of the industry, and if they can prove their staying power by continuing to innovate over the next few years, in addition to providing support to their early adopters, then they will become a recognizable name to more than just the gadget geeks.