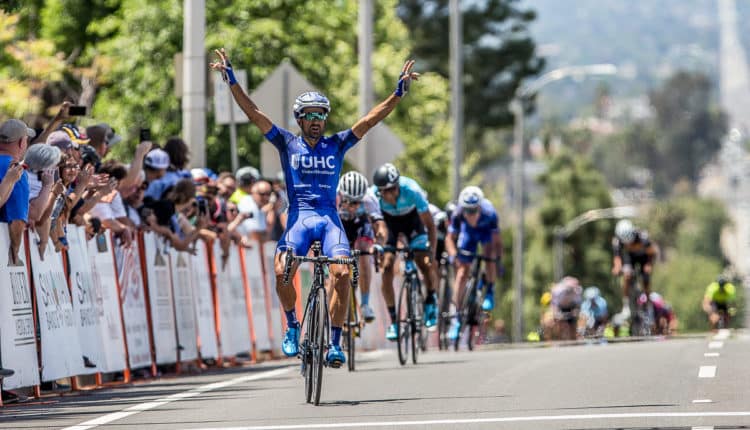 RBC – May 4, 2018 (Highland, CA) – UnitedHealthcare Pro Cycling’s Lucas Haedo looked back, saw he’d won by a few bike lengths and took his time to celebrate his victory in style. The decorated Argentinian sprinter laid low during the 20-lap hilly circuit race, letting the race play out in his favor until the final lap, when he positioned himself perfectly to charge up the finishing climb ahead of Michael Rice (Axeon Hagens Berman) and James Piccoli (Elevate KHS). Haedo’s win marks his first of the 2018 season, and his second win in Highland after winning in 2015, proving the 35-year-old is still a force on the road.

“We went all day for the breakaway because we knew we had to put some pressure on the Axeon guys,” Haedo said. “In the end, nobody had legs to go from the bottom to the line. I was 8th or 10th wheel, Piccoli went too early, and I was waiting, waiting, waiting.  The last 300m was really hard. Sebastian [director sportif] was in the radio, ‘keep going to the line! Keep going to the line!’ and in the end I got it. I’m so happy to win again here for UnitedHealthcare.”

Most teams showed intense motivation to race, which thwarted any significant moves off the front until the race’s midpoint, when Cory Lockwood (Project Echelon), Lachlan Norris (UHC) Ulises Castillo (Jelly Belly) and Joshua Kropf (Applewood Garneau) gaining a maximum time of more than a minute. On the final KOM, with six laps to go, Lockwood attacked leaving only Norris in pursuit.

Lockwood maintained his lead until the last lap, when he was swallowed up by the charging Axeon Hagens Berman team, leading the field to get the stage win with Michael Rice, who was quick enough for second place on the day.

“Great day for the team, we came into today wanting to protect the yellow jersey,” Rice said. “The boys did a great job doing that. Getting second on the stage is such a good bonus, I’m really happy. Thomas is in a really good position with the criterium tomorrow and then the famous Sunset Loop on Sunday. We have a strong team and we’re really excited for the rest of the race.” 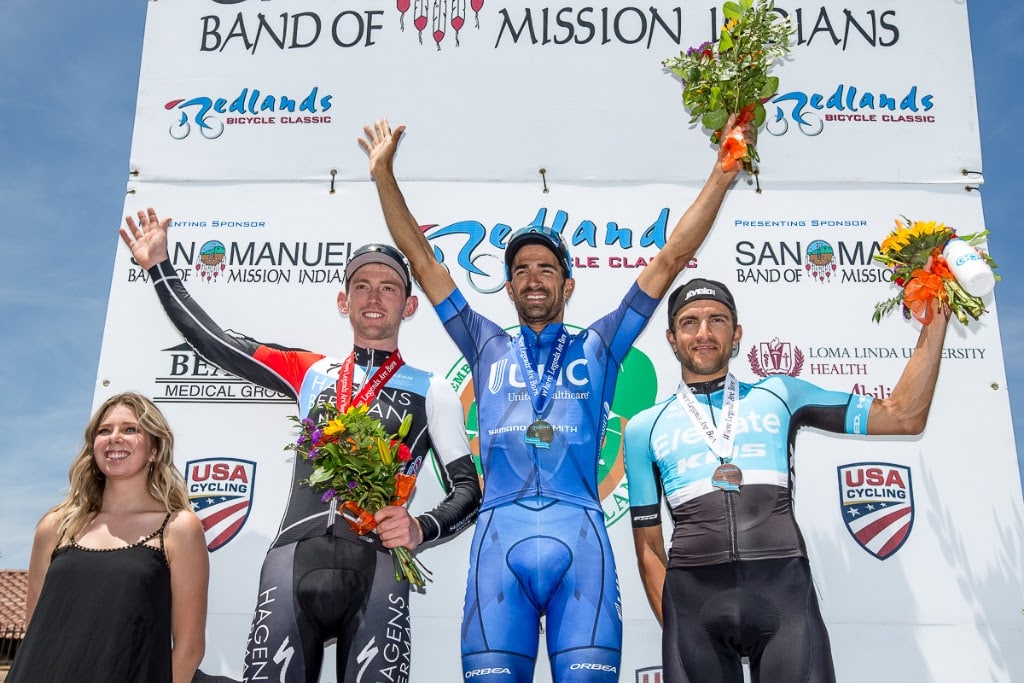 Jasmin Duehring (Twenty20) muscled her way to a win Friday on Stage 3 City of Highland Circuit Race ahead of the yellow jersey, Katie Hall (UnitedHealthcare) who finished second and Sara Bergen (Rally Cycling) in third for the day. Crucial time bonuses were available for the top three finishers, with 10, 6, and 4 seconds available on the line. Bergen jumped up to second on GC ahead of Edwige Pitel, who now sits 2 seconds down from the Rally rider. Hall gained a mere two seconds more ahead of Bergen on the line.

“I am happy with my team’s ride. I’m really proud of them for really going out there and laying it all down,” Bergen said. “Congratulations to Jasmin and Katie for their stellar ride. It was a huge effort for the team. We’re still hungry and not fully satisfied. We got a few seconds but Katie also got a few.”

Duehring attacked in the final few laps of the 14-lap, 41.3 mile circuit course, and held on for the victory. A break of 5 riders, including Duehring’s teammate, Allie Dragoo, held up to a 1:10 minute advantage midway through before Duehring caught them with 4 laps to go. The temps rose to over 90 degrees by midday, which also played a factor in the day’s racing; a drastic change from the snow only two days ago.

“I knew as long as I just kept the pressure on, I would have a chance,” Duehring said. “I was hurting for sure. I know from watching the men’s race the last few years that the break has a really good chance of sticking towards the end, especially when it’s hot like this, because the field is getting tired too. I had my teammate Allie (Dragoo) in the first break. Once we caught them, there were a lot of counters. It was close in the end, I didn’t think I was going to make it.”

Twenty20 raced aggressive the entire day to cover the time bonus seconds available in order to keep Shayna Powless in contention for the overall on GC.  Rally Cycling and UnitedHealthcare fought for control of the field throughout the stage and look to the final two stages and battle on the Sunset Loop for Sunday.

In the QOM classification, Hagens Berman Supermint rider, Starla Teddergreen was in the break, and secured a few more QOM points. Teddergreen had been in the break gaining points Thursday to keep her in contention for the jersey. The 37-year-old sits one point down from Bergen heading into the final two stages. 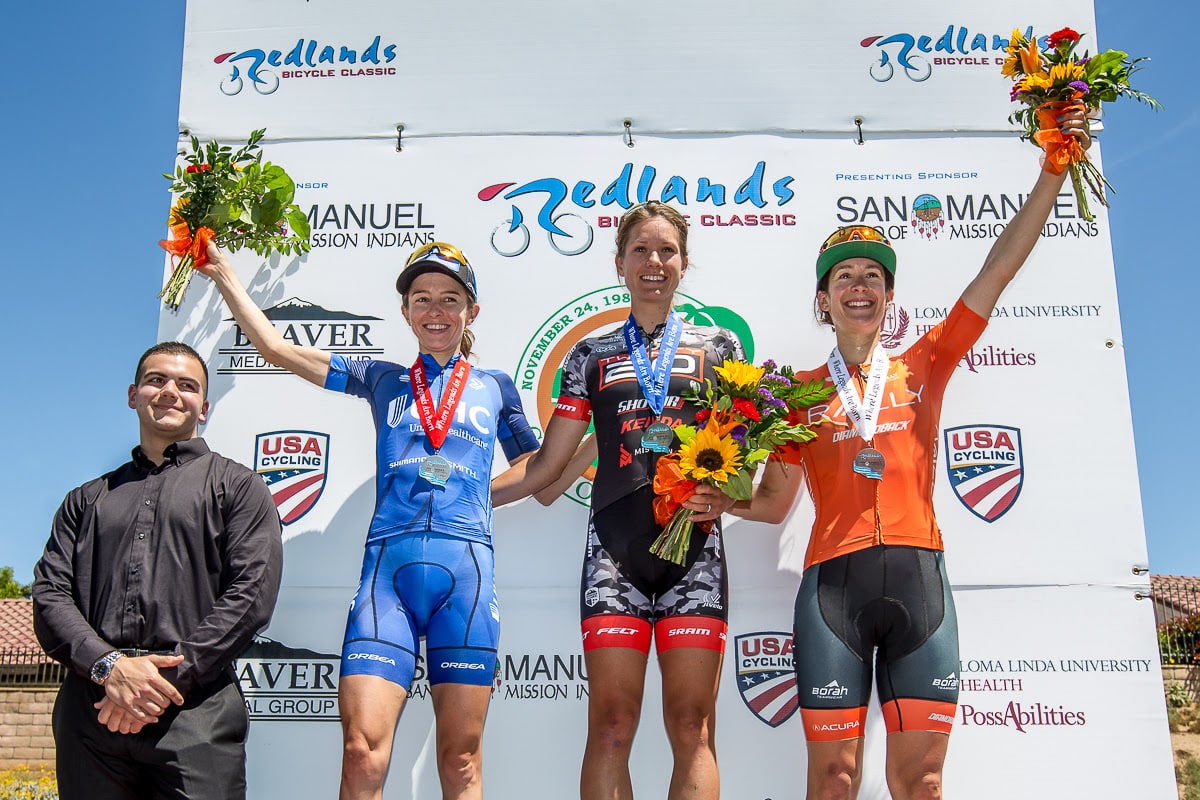