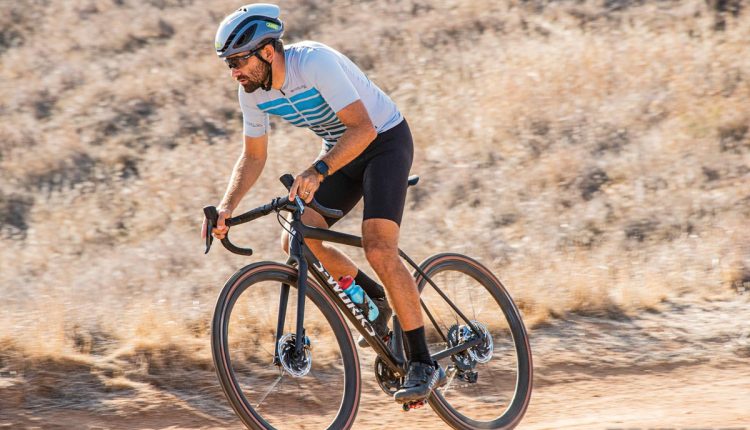 When it comes to designing race bikes, Specialized is fortunate to have an oversized roster of racers to call on for the type of feedback that would be helpful in the build process. So, when their top gravel racers said they wanted something lighter and a bit racier than the Diverge, the R&D team got to work.

Despite borrowing the name of the long line of cyclocross bikes that preceded it, though equally race-focused, the new Crux is nothing like its predecessors. In short, the design priority has shifted from the diminishing world of hurdling over barriers inside a ribboned-off closed course to the bigger picture of gravel racing.

At first glance the Crux has assumed all of the composite research and development used to design last year’s lightweight wonder, the Aethos road bike, but with added durability and reinforcement for the rigors of gravel.

Our size-54 S-Works version has a 56cm stack and 38.8cm reach. Specialized has maintained the 71.5-degree head tube angle and 50mm fork offset, but the new geometry offers a 67mm trail rather than the 65mm of the previous Crux. The head tube is 10mm shorter at 13cm, while the fork length is almost identical at 40.1cm. There are 42.5mm-long chainstays with a total wheelbase of 102.3cm that still leaves room for 47mm tires. As with the rest of Specialized’s recent road offerings, the Crux also gets the beloved threaded bottom bracket.

Like the rest of the Crux build offerings, their pinnacle model is targeting gravel, not ’cross. The SRAM Red XPLR eTap AXS 1x rear derailleur is paired with a 12-speed 10-44t cassette. Up front is a 40t chainring on a Red crank with Quarq power meter, something many performance-oriented riders will appreciate. The wheel spec relies on Specialized’s own tubeless-ready Roval Terra CLX carbon wheels. The carbon hoops have a hooked bead with an internal width of 25mm and are mounted with a set of 38mm Pathfinder Pro tires.

For the rest of the build, it’s all in-house, starting with the S-Works SL stem with a 6-degree drop. The gravel-oriented carbon Roval Terra handlebars have a 103mm drop, 70mm reach and 12-degree flare wrapped with Supacaz Super Sticky Kush tape. The Crux has the same 27.2mm Roval Alpinist Carbon seatpost topped with the carbon-railed S-Works Power saddle as found on the Aethos.

We appreciate that Specialized has transitioned back to the threaded bottom bracket, especially on a bike that is meant to mix it up in the dirt.

When it comes to riding gravel, a ’cross bike, while capable, has never been ideal. Specialized knows that the new Crux might not be ideal in stock build or geometry for the hardcore cyclocross racers, but it will still be capable of getting the job done. The lightweight frameset and quick-handling aspects will be spot-on for 90 percent of any closed-course battling needs. For the rest of us, the Crux is now a better option for pulling double duty.

One of the first things we noticed was the bottom bracket height. The original Crux had a drop of 69mm, and the new one is 72mm. It is now at a reasonably standard height since we have always felt like the Diverge was low with an 80mm drop. This helps when pedaling through turns or even maneuvering over technical terrain, especially at speed.

The new frame construction is impressive with a claimed frame weight of only 725 grams for the S-Works version and 825 grams for frames that use the lower-spec 10r carbon. Those weights are lighter than most modern road frames. Our test bike hit the scales at 16.12 pounds, and it is probably the most lightweight gravel bike to pass through the RBA office to date.

“The new Crux doesn’t replace the Diverge by any means, and we would say that for 60–70 percent of gravel enthusiasts out there that the Diverge is a better choice.”

On the road, this was immediately noticed, as the bike felt agile and responsive. The bike is surprisingly comfy and balanced; both the front and rear of the bike manage bumps and road imperfections well. The bike feels shorter than its 102.3cm length, thanks to its 42.5cm-long chainstays.

Although this bike has been spec’d for the racer, the center-click Pathfinder Pro tires are not our favorite. They are a bit small for our local terrain, and the smooth center had us sliding around on loose gravel more than we liked. The tubeless Terra wheels have a hooked bead for those who have not transitioned to tubeless or want to run tire pressures on the high side. The wheels are 25mm wide inside, but we would prefer a hookless bead for its added durability in the likely chance we strike the rim on a rock at speed.

When we look at the new Crux, we can’t help wish it was badged with a new name to minimize the confusion. With that said, the geometry changes are subtle enough that most CX racers will still be happy with its performance over the barriers, but more impressed with its new transformation to a gravel priority. The S-Works offering is incredibly lightweight, but so, too, is the rest of the line.

To spend $12,000 for the S-Works model, you probably either need to be a serious racer or prestige hungry rider simply willing to blow too much money on a high-end dirt bike despite three other lower-priced models that start
at $4200.

The new Crux doesn’t replace the Diverge by any means, and we would say that for 60–70 percent of gravel enthusiasts out there that the Diverge is a better choice. In our opinion, the Crux would be a solid choice for those that love racing and have the horsepower and handling skills for a race-oriented bike. We could even see a lot of consumers swapping the 38mm tires out for some road slicks and hitting the weekly group ride. Only time will tell, but we hope this ultralight race bike holds up to the abuse of gravel.

Lighter than many road bikes