Throwback Thursday: The Day I Dropped The Olympic Champ

It took disc brakes and full-suspension to make happen 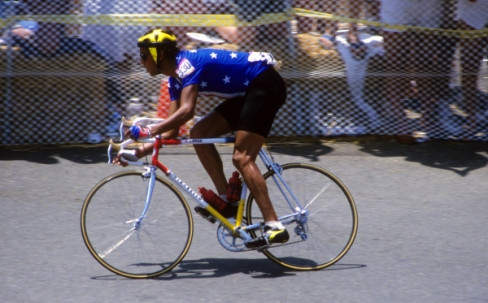 Like most old guys, I admit that my memory is not what it once was. Luckily, given my 30-plus years spent as a cycling journo, I have a breadcrumb trail of photos to fall back on to help recount some key moments of many back-in-the-day adventures.
Take for example this photo I shot of 1984 Olympic road race champ Alexi Grewal in Moab, Utah back 1991. Those were the days when hundreds of mountain bikers would annually descend on the (then) sleepy old mining town to partake in their annual Halloween festival. As the (then) editor of Mountain Bike Action, I too would head to Moab each year to use the rough trails as a test bed for all the tide-turning suspension bikes that were beginning to arrive.
THE ROADIES JOIN IN
In addition to the hordes of mountain bikers, the Moab gathering was known to also attract a bevy of skinny tire celebrities like Andy Hampsten, Davis Phinney, Ron Kiefel, Connie Carpenter, and Dede Demet who made the drive from Boulder, Colorado. In 1991 Alexi showed-up in his Coors Light kit aboard a Colorado built Clark-Kent hardtail (with “Prototype” written on the top tube) and  a Scott Uni-Shock fork (also developed by Clark-Kent)  ready to ride.

Given the early state-of-play in mountain bike technology, most everyone on our group ride was riding fully rigid bikes, with only smattering of the then still new Rock Shox and Manitou forks to be found. As for me, I was aboard a super cool Gary Fisher RS-1 with front and rear Mert Lawwill designed suspension providing a whopping two-inches of rear wheel travel & three-inches up front. Helping to slow the 30 pound bike was a pair of first-run Mt. Cycles Pro Stop (mechanical) disc brakes.

I had actually first ridden the RS-1 at the 1990 UCI Mountain Bike World Championships when  I “borrowed” Gary’s personal bike when it was left unattended over at the Campagnolo truck. Gary’s bike was running a Rock Shox fork and Phil Wood tandem rear disc brake and he would race it in the downhill that weekend (arguably making him the first person to ever race a full-suspension mountain bike).

As our group of at least a dozen riders gathered atop the trail head for some photos ready to drop-in, Alexi soon took the lead and off everyone pedaled down the challenging single-track. It didn’t take long for Alexi and I to gap the group, he relying on his fitness and handling skills, me on the merits of full suspension and disc brakes with a dash of motocross skills and audacity to stay on his rear wheel.
As the trail got rougher with a succession of drop-offs and stutter bumps, Alexi was forced to slow given the limits of his bike.  I on the other hand was able to exploit the benefits of both primitive and suspension and disc brakes to surge past and promptly drop him! For me, this was yet another clear example of the impact that motorcycle inspired technology could and would have on a mountain bike.
Funny thing, but fast forward some 30 years later and here I am still be arguing with many cyclists about the merits of disc brakes and suspension on road/gravel bikes. How does that old saying go; “The more things change the more they stay the same”

Bike of the Week: Pinarello Paris