Nick and Kristen Legan go long for the day job 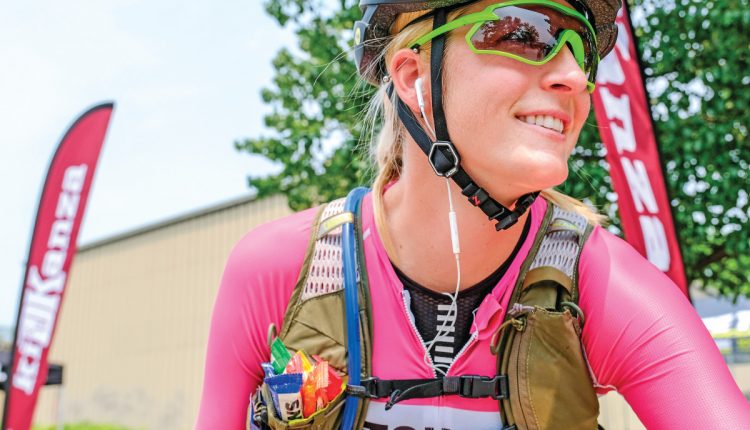 Just as I spoke about in my column, if there’s one thing we pride ourselves on at RBA, it’s our enthusiasm for riding bikes and doing the work ourselves. In short, we don’t hire freelance writers to tell you how hard Dirty Kanza is or how certain products stack up at mile 180.

And no different from what consumers should expect from anyone who is pumping out editorial content, we prefer to get new product info from people who know what they are talking about.

If there has been one downside (among the many) to the growth of PR firms inundating us with endless hype about the latest and greatest products, it’s when those doing the touting have plenty of communication skills but
little actual bike riding knowledge to draw on for their testimony.

Luckily, from people like Tom Ritchey to Boyd Johnson, the bike industry (versus the hype industry) is still filled with plenty of people we can rely on for a hands-on knowledge that lends credence to their products. We know everyone has their own bias, but at least we can be confident that not only do they talk the talk, but they also walk the walk. And that is where Nick and Kristen Legan come in. 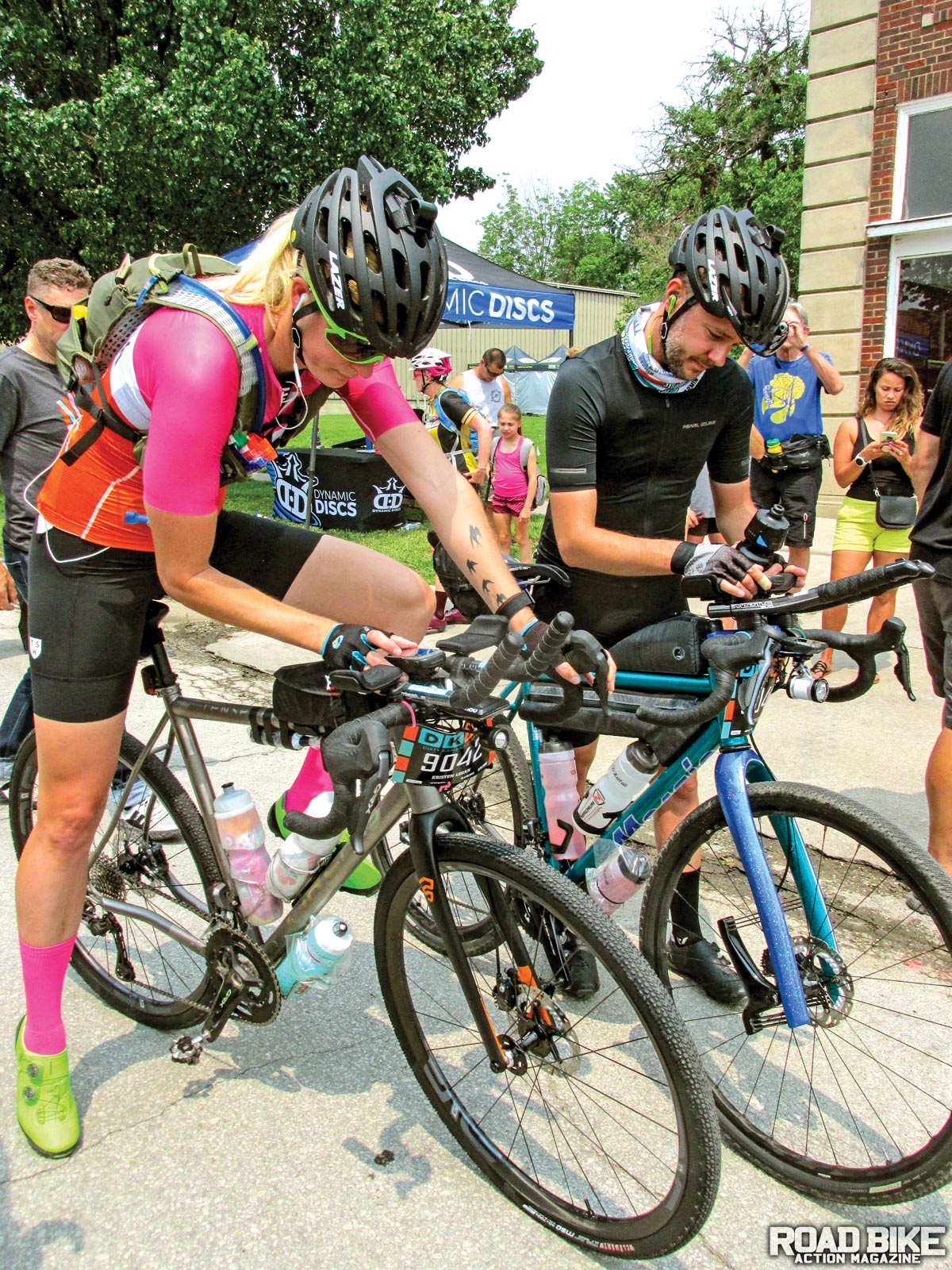 The Legans are a Colorado-based couple who over the years have polished their resumes by putting in hundreds of thousands of miles on the bike. At Dirty Kanza they lined up together for the 350-mile-long DKXL (Kristen’s finish was 26 hours, 22 minutes, and Nick rolled in at 28 hours, 36 minutes). Currently, both are affiliated with Shimano—Nick the recently hired road product manager and Kristen who works for Shimano’s PR firm, Dispatch Communications.

In addition to being the author of Gravel Cycling, 40-year-old Nick has been a long-distance bike racer for years. He is a veteran of Dirty Kanza, Trans Iowa, Gravel Worlds and the Tour Divide.

“They know product and they know suffering—and we like that.”

While Nick was off on his solo rides, 33-year-old Kristen was one of six women to ride the entire Tour de France route one day ahead of the men in 2012 to help advocate for equality in women’s cycling. Kristen is a pro cyclocross racer and has podiumed the DK200 more than once.

A preference for titanium frames is apparently something they share, as Nick was aboard a beautifully painted Mosaic mounted with a Lauf fork and Dura-Ace drivetrain, while Kristen was on a Firefly built up with Shimano’s latest GRX drivetrain.

Despite their brand affiliations, Kristen and Nick have more than proven themselves in the trenches. They know product and they know suffering—and we like that. We had a round table with the Colorado couple following their DKXL effort to find out how the husband-and-wife team handled the elements.

OVER THE BREAKFAST TABLE

RBA: Before the race, what plans are discussed between the two of you?

Kristen: After bantering about who is going to kick whose butt, we discussed how much contact we want to have out there. For most gravel races, we have our own goals and tactics, and rarely see each other out on course. I’m more of the racer and tend to go out super hard, while Nick keeps things nice and steady. Sometimes we overlap as Nick waves at me as he passes by, but we don’t often find ourselves riding together. I also never ask Nick to work for me, despite the fact that we’re on a similar level (it’s a controversial topic in women’s gravel riding).

Nick: Our biggest concern for DKXL was that we both felt under-prepared this year, which made a DNF a very real possibility for both of us. Knowing that, we decided not to tell each other via text if we pulled out of the race. I wanted to make sure if I pulled out that it wouldn’t affect Kristen negatively and vice versa. I didn’t want to deny Kristen her own personal journey out there.

RBA: Do you ride together the whole time?

Kristen: We actually didn’t ride together at all. The whole field stuck together for about 30 minutes at the start of the race, and we saw each other in there, but we didn’t actually talk much. Early on, there was a crash behind me and I slowed for a second while looking back to make sure Nick made it through. Once I saw he didn’t go down and was still rolling, I went with the front group and we didn’t see each other again until the finish line.

RBA: How would you differentiate your respective styles/approaches?

Nick: I’m much more of a rider than racer. I love races and see them as a very personal challenge. I’m out there to beat my own demons and not ride anyone else into submission. The mental aspect in long distance riding is super important and I enjoy that challenge. While I love a solo mission, I also really enjoy the camaraderie out on course.

Kristen: I’m usually a racer and want to stay up front as long as possible. However, I was feeling so under-prepared for DKXL this year that I really reined in the effort and tried to be very conservative to start. As a result, I was much more in line with Nick’s MO with the steady riding, and it worked. I also enjoy riding alone and was out there on my own for 90 percent of the race.

RBA: Kristen, since you handily beat the hubby, can you add those thoughts about when you finished and then heard about Nick still being in the race?

Kristen: Since we didn’t have any contact out on course, I wasn’t sure if Nick was still riding or if something could have happened to knock him out of the race. My first question was, “Where is Nick?” Once I heard he was still on course and only about 30 miles out from the finish, I felt a wave of relief and excitement that we were both going to finish this darn thing. I actually had more confidence in Nick finishing than in myself, so that finish line was an incredible experience.

RBA: What about rest and food?

Kristen: I didn’t stop to sleep or rest much longer than what it took to buy some drinks and snacks at convenience stores along the way. Since DKXL is self-supported, we’re not allowed to have anyone out on course to help us or to give us food or water. We stopped at strategically located convenience stores along the route and just bought what we needed. You don’t go through many towns, so the few that you do hit, you need to stock up for the upcoming segment. Our longest segment without resupply is from about mile 100 to 200, which happened to be through the night.

I didn’t get sleepy at all along the way, which is something that everyone asks about. I think if you just keep moving and keep your mind active, you don’t feel the sleepiness through the night. Fatigue started to sink in mid-day when it was super hot out, and I was all alone, but I was getting close enough to the finish that it didn’t really affect me.

I’m actually pretty surprised how little I ate over the whole race. I started with some GU Roctane in my bottles, which helped get a bunch of calories in to start. Then I would grab some Gatorade and water at the stops, as well as something solid like a Clif Bar or Nutter Butter cookies. At the 200-mile mark I also got a breakfast sandwich at the convenience store and it was money! Oh, and I had a couple of Red Bulls along the way, which might also explain a little about not feeling sleepy.

Nick: I didn’t sleep at all, and I felt lucky because I know some DKXLers were on the struggle bus with that. I didn’t consume too much caffeine, either, until late in the race in the form of sodas.

My only rest came when I got off my bike to buy food and drinks at convenience stores along the way. I think my longest stop was 30 minutes, but much of that was spent using the bathroom, reapplying sunscreen, cleaning and lubing my chain. I did take the time to buy a toothbrush after 200 miles. Man, that was refreshing!

For food, I started with a pretty good supply of gels, chews and bars. I also had a couple packets of drink mix that I used during the night. Drinking calories is easier than unwrapping food items in the dark. At stores I bought some PayDays, a couple of breakfast sandwiches, but mostly drinks. I like sweetened tea with a dash of salt in my bottles on hot days. I also drank Gatorade, a Coke and left the final stop with a liter of icy Mountain Dew. It went down so well over the last 39 miles. It was getting hard to eat by then. My jaw started to hurt from all the chewing!