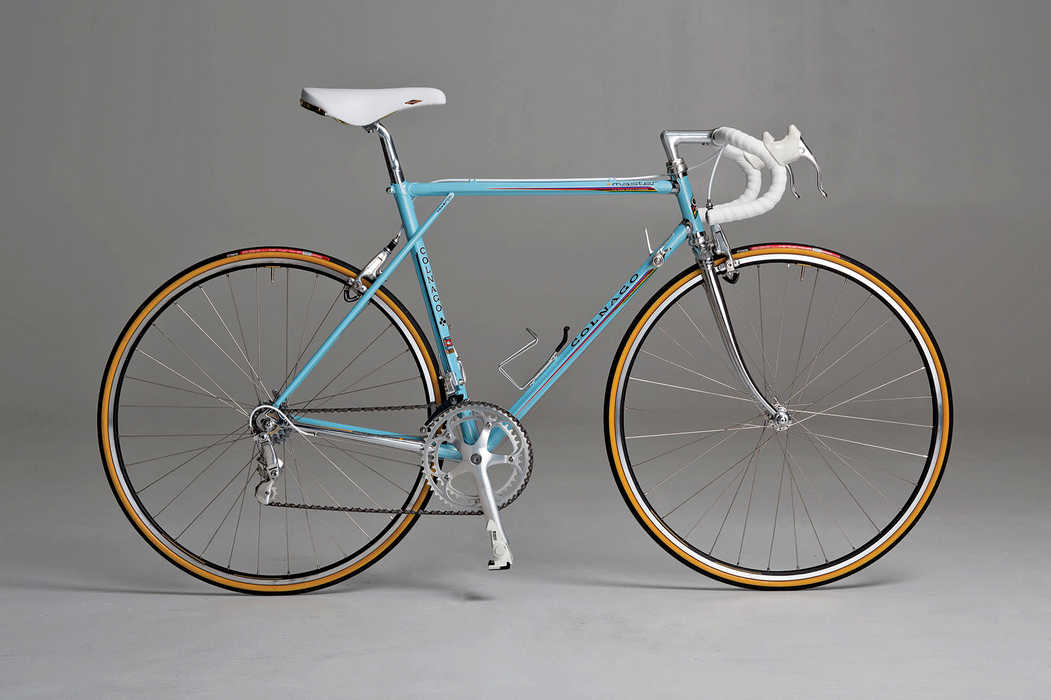 Many years ago now, nearly 30 of them, I began racing as a junior cyclist. I knew a little bit about bikes from working in my local bike store in Milwaukee, reading magazines and seeing the bikes that my friends and heroes rode. This is a story about a particular bike. 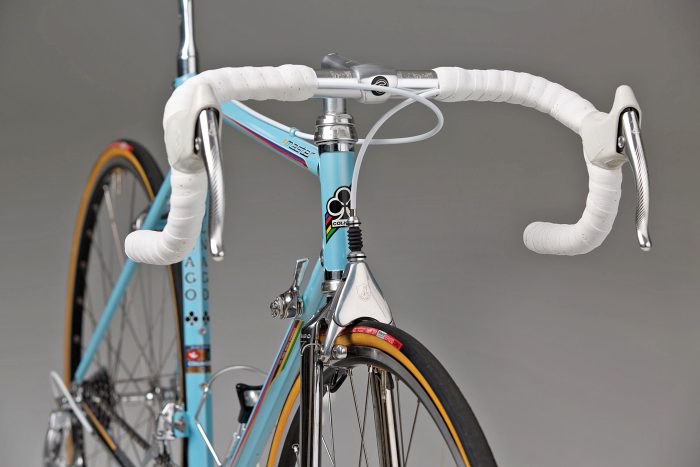 It was while I was out on a training ride with my friend Zach that this particular bike first made its presence known. We had stopped at the bike shop where he worked, and it was there that I met Zach’s friend, Nate. Although I didn’t know anything about him, right away I could tell that he was one of the cool kids. He sat perched on top of the seat of his bike leaning up against the mechanic’s bench in the back shop. Nate looked “pro.” He had all the latest gear of the mid-’80s—a perfectly matched kit, Campagnolo cap and Italian cycling shoes. He was the first rider I saw with Look pedals other than LeMond.

I recognized the bike he was sitting on. It was a Colnago Master, but with a unique triple-triangle design I had not seen before. The components were all Campagnolo and C-Record at that, except for the more standard-issue Super Record brakes. I knew enough about Colnago and Campagnolo to know it was the best of the best you could get in the mid-’80s. Still, the frame was an anomaly, and I had no idea how rare that model was. It was powder blue, like my grandfather’s Falcon. It was spectacular, and I wanted it. We wrapped up our visit some 20 minutes later and started to head out to continue our ride. Nate was still sitting on top of his bike, feet clipped into his pedals, ready to ride, just not with us. 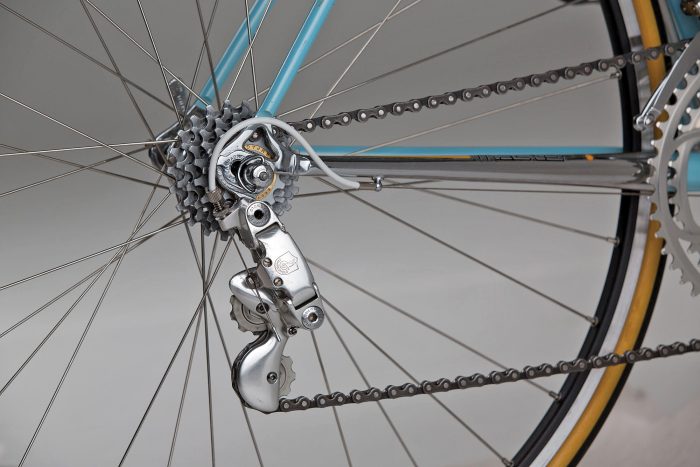 GONE, BUT NOT FORGOTTEN

I never saw Nate or that bike again, but I always remembered it. I remembered its color, the Look pedals, the components that it had and the unique frame design that was rare in the road world. Throughout the years I never stopped thinking about that bike. I looked around at other bicycle stores and talked to other Colnago tifosi to see if they had ever seen a unique Colnago Master with this triple-triangle design. None had, and since this was before the Internet, there wasn’t much research that you could do other than talk to the old-timers at the local pro shop who may have seen one along the way.

Later, I would come to find out that the bike Nate had was the rare Colnago Master Equilateral, and it was produced for only a few seasons. For years, despite countless visits to bike shops and annual bike shows, I had never laid eyes on another Colnago like the one Nate was riding. That is until one day 30 years later.

As I had found out, information on the Colnago Master Equilateral was as rare and hard to find as the model itself. Colnago was not the first to use the triple-triangle design. In fact, some of the earliest versions can be found dating back to the 1920s. Hetchins made a beautiful version of a TT-type frame in ’69. Ironically, the frame design was made most popular by GT with their range of mountain bikes introduced in 1987 and has since become a design signature of theirs. It is thought that by shortening the distance from the bottom bracket to the seatstays that it would not only make the frame stiffer but also more comfortable, while others suggest it’s just a unique design element.

Over the years my love affair with vintage road bikes only deepened, and I soon began to collect them. Every once in a while I would stumble across a few good deals on bikes from the mid-’80s, which I wanted from the days when I first began racing. I picked up the odd Super Record bike here and there, but what I was really searching for over the past dozen or so years was the bike I had seen in the shop as a kid. 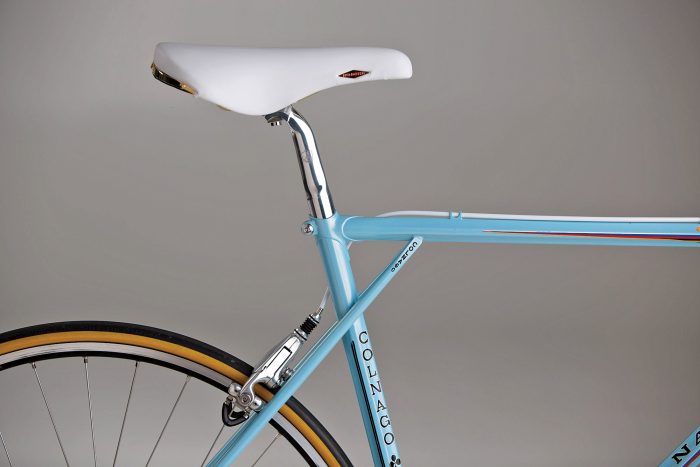 THE E-MAIL THAT CHANGED MY LIFE

Now living in Minnesota, one day I got an e-mail from a colleague and fellow collector. Knowing that I was a Colnagoista, the e-mail said, “You should check out this bike. It’s for sale locally, a really good price, and it looks like it might fit you.” I quickly checked the listing, and much to my surprise, not only was it a blue Colnago like I had always wanted, but the seller lived locally to me as well. I called him and, without asking any questions about the bike, told him I would be over to pick it up immediately. My goal was simple: act fast and don’t give anyone else a chance to take it from me, or for him to change his mind and keep it.

The gentleman I bought it from had it hanging in his garage for the past 10 years. The handlebars were upturned, and the whole bike was covered in dust, dirt, cobwebs and was beginning to show signs of its age. When I asked why he was selling it, he replied, “I just don’t ride it anymore. It needs to go to a new home, to someone who would enjoy it.” 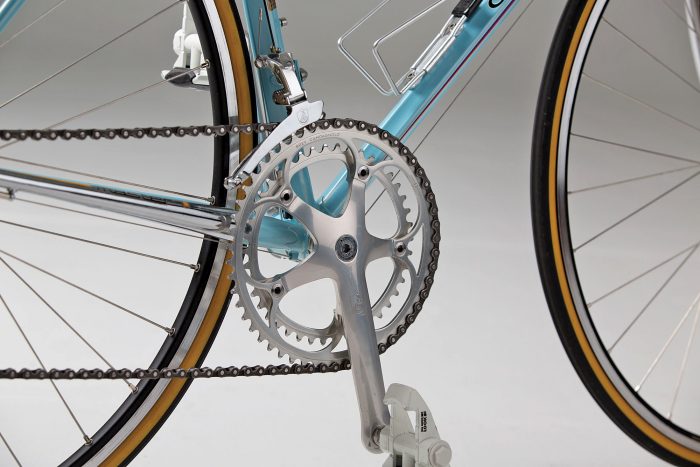 SO OLD, SO NEW

I got the bike home and began to carefully restore it to how it looked back when it was new. As I began applying countless layers of elbow grease, I couldn’t help but think about Nate’s bike and how much this one looked like it. More incredibly, I couldn’t stop shaking my head over how fortunate I was to finally find one of these rare beauties, and only a few miles from my home too. My new bike had the same first-generation Look pedals Nate had, the pedals that I ran out to get just after I saw them on his bike. It had a Campy C-Record gruppo in near-new condition with standard caliper brakes and early index shifting. Best of all, the bike was my size, a 54cm, so I would be able to ride it.

After many months of restoration I finally had it finished. Relying solely on my memory and some mid-’80s Bicisport mags as my guide, I replaced the worn and out-of-place components with a goal of making this bike period correct and a solid 10. I changed out the standard calipers with a pair of C-Record Delta brakes with the help of a friend who had a pair sitting in the basement of his bike shop. I replaced the hubs and spokes and swapped the mismatched tubular rims for a pair of NOS clincher-type rims.

The Master, now complete, was once again the beautiful machine it was intended to be. Though it’s unlikely they will ever see the bike, or even know of its existence, I can only hope that the bike would make the two titans of Italian cycling, Valentino Campagnolo and Ernesto Colnago, proud. I have heard that another example of the bike can be found in Mr. Colnago’s private museum at the his factory in Cambiago, Italy. 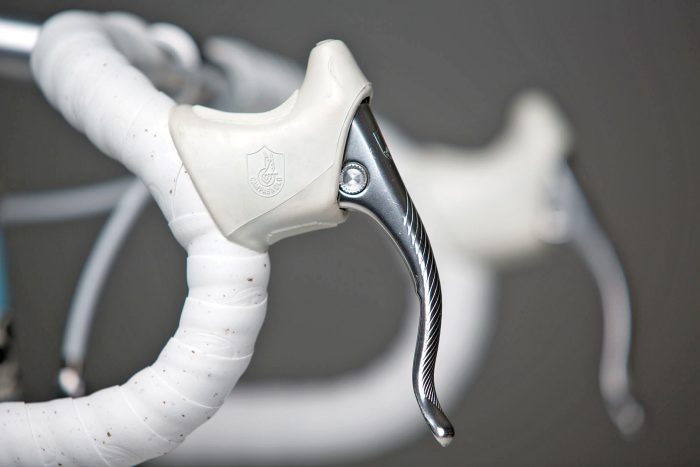 By chance, I recently ran into Zach at a local bike race, and I asked him if he recalled the time we stopped by the store and met his friend Nate who had a blue Colnago all those years ago. He did and was still friends with him, so he passed on his contact information. I thought he’d be interested to see a bike like he used to own, so I reached out to him.

As Nate and I began our conversation, I let him know how I came to find the bike. I asked him if he still had his. He didn’t; he said that he had sold his bike shortly after we had met that day. Out of curiosity, I asked what size his bike was. “It was a 54,” he said. “Same as mine,” I replied. I told him I recalled his bike was a complete C-Record build. He agreed. “Except for the standard brake calipers,” he said, because the Delta brakes were not available at the store when he bought the bike. 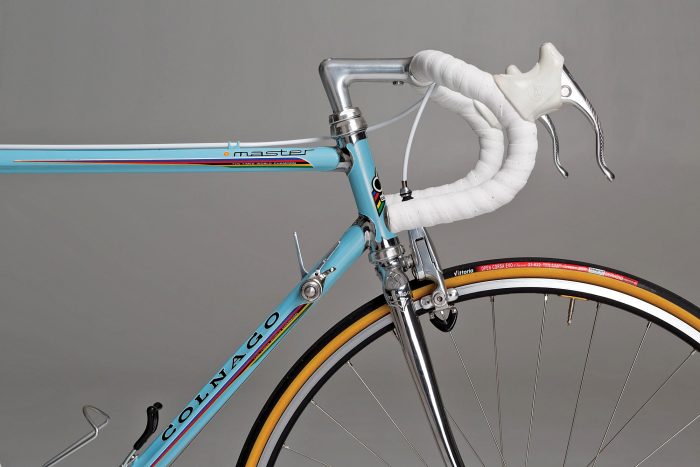 We continued on going through each component, because his bike was my reference to being period correct. “Cinelli 1R stem 110 with Criterium 65-40 bar and a 170mm crank,” I said. “Yes,” he said all the same as he had. It was at this point we began to consider the coincidence that this could be his original bike, the very bike I had seen nearly 30 years ago and that bike I had always wanted. I asked him one last question: “The bike I have came with rims that didn’t match; what rims were on your bike?” He replied, “I had one Campagnolo rim and one Ambrosio rim. I had fallen and broke a rim and replaced it with what we had in the shop.” “That is exactly how the bike was when I picked it up,” I said. It’s then that we both really believed the bike that I now have is the bike that he had, the very bike that I had always wanted.

What journey this bike took to get back to me nearly 30 years after I’d seen it for the first time is unknown. The owners in between us, the miles the bike has ridden, the roads it’s been on are mysteries. What is clear, however, is that this is the most beautiful bike that I have ever seen. Its beauty and heritage are only magnified by its rarity and design. The bike that I had searched many years for, only to find in my own neighborhood, is now the exact bike I have today.

The bike now sits downstairs in a special room, and there are two things I now know for certain about it. Yes, it is the same one I’d seen some three decades prior, but more important, it is a bike worth waiting for. 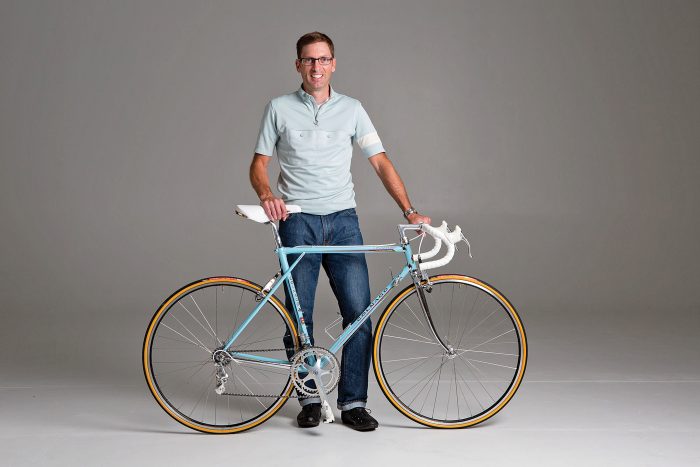