Having had the privilege of spending many hours in the company of Italy’s cycling industry titans over the years, I would say that Antonio Colombo is something of an outlier. Actually, among the fellowship of other namesake icons like Valentino Campagnolo, Fausto Pinarello, Ernesto Colnago and Ugo De Rosa, each of whom have their own eccentric personalities, it wouldn’t be out of bounds to deem Antonio as the oddest bird of them all. And to me, that is worth celebrating.

As the scion of Angelo Luigi Colombo, who founded the venerable Columbus steel tubing brand 100 years ago, Antonio is a mix of both keen industrial insight and cosmopolitan fascination.

With an ever-present acumen for aesthetics, style and design, his ready comments about bicycle design and technology, as well as the state of the industry, come sharp and assured. And yet, focused as he is on the immediate, as we walk down the street for a coffee, his gait and thought come across as loose and independent. Even as we talk about bikes, our shared lifeblood, Antonio often appears immersed in a larger realm of thought.

It was on a rainy day late last year when I had the opportunity to spend the afternoon with Antonio in Milan, where he was hosting an exhibition celebrating Columbus’ centennial anniversary. The first of a series of anniversary installments, this one was dedicated to the company’s history as a material producer for some of the world’s more famous furniture designers.

After an extensive schooling on the pre-war furniture industry, Antonio invited me upstairs to his apartment, where, none too surprisingly, nary an inch of wall or floor space was empty of some kind of colorful artwork. As I sat at the dining room table scribbling a flurry of quotes and notes, it was impossible to not be simultaneously diverted by the array of eclectic wall trappings. It all seemed like the clearest indication of what lies inside Antonio’s mind and motivations. 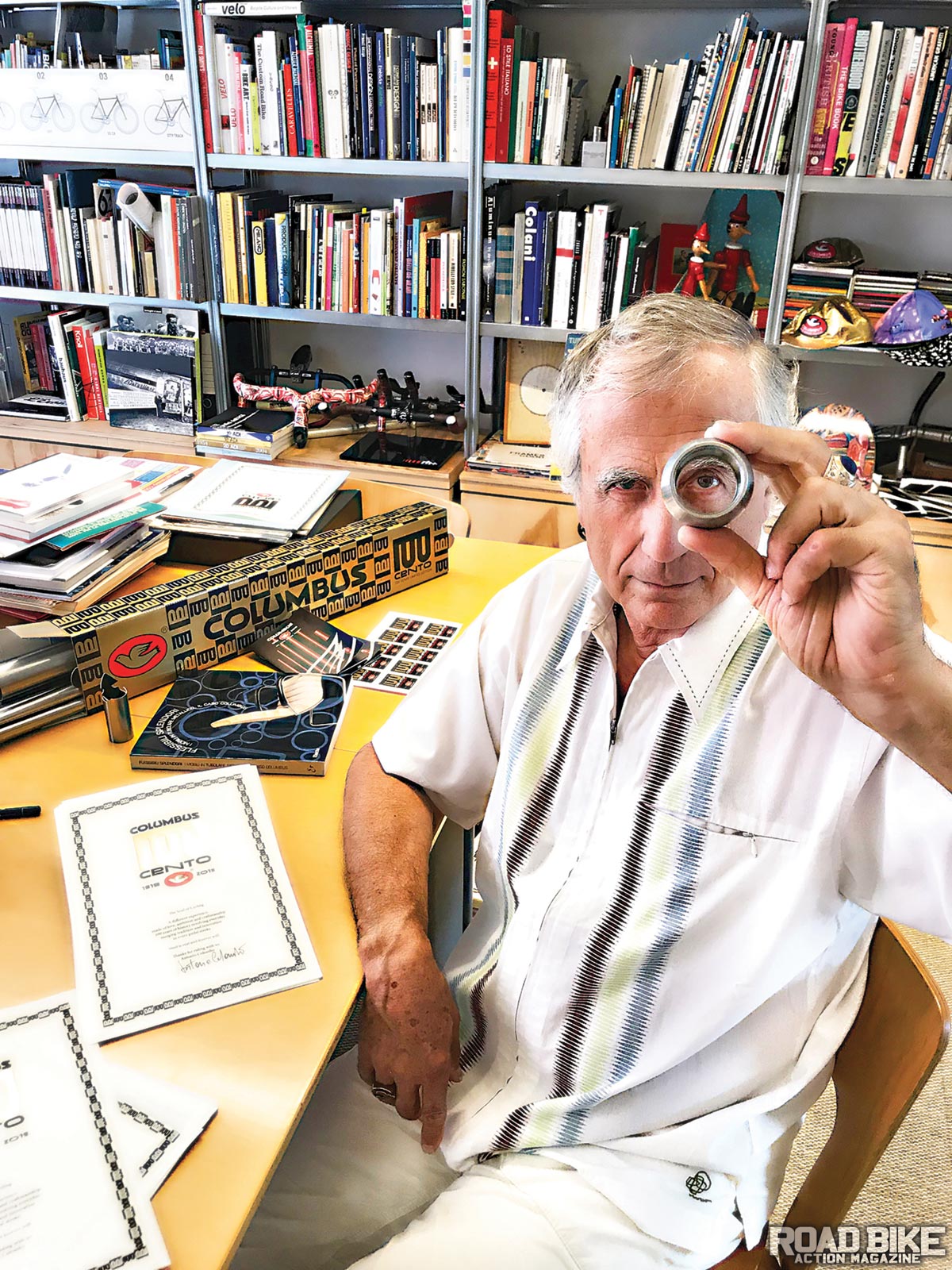 A LEGACY OF STEEL

It was back in 1892 that Antonio’s father Angelo Luigi took a job as a clerk in a metal shop. By 1919 Angelo had founded the Columbus tubing factory where, before the later needs of both the furniture and aircraft industries took precedence, bicycle fork blades were the order of the day. It was much of what they learned in producing materials for those industries that Columbus made strides in the tube technology that would eventually benefit so many frame builders.

As he recalled the company’s earliest days, Antonio was happy to report that in his search for old relics at the factory, which lies just outside of Milan, he discovered the company’s first commercial invoice for fork blades. By the time the fourth invoice was made, Columbus was shipping frame tubes to the Doniselli bike factory.

Today, Columbus no longer manufactures their tubes in-house. Instead, they are purchased from outside sources before landing at the Columbus factory where they are cut and drawn according to their own long-held recipes. “For me,” Antonio adds, “our Spirit tubes are my favorite, because they are light, easy to work with and good to ride.

“When I was young, I had no knowledge of this history. At 18 years old I was into the youth movement, and I stayed away from everything that represented the pre-war trends, as they represented the fascist way of thought in Italy. In fact, I was not so proud of the things my father’s company was making as it was tied to the war. I was more interested in art, music and literature, not the industry. In later years, though, I picked up the most human part of what Columbus was responsible for—the bicycle.”

“Back in the ’50s, Cino Cinelli was the only bike builder who would buy from us. Well, actually, my father thought it was the best thing to only sell to one company. He didn’t like the idea of going outside. I didn’t want to go so much with Cinelli, but Cino was involved with Eddy Merckx’s hour record in 1972, and he helped get our tubing used for Eddy’s bike. Let me tell you, that was the beginning of something new!

“More than any other country, Italy has lived longer with the bicycle. As a country, as a people, we are connected to the bicycle. This is what provides our heritage.”

“We were staying in the same hotel as Cino and Ernesto Colnago, and I called Cino to ask if we could advertise, and he said yes; I think they may have been drinking. So even though the bikes were advertised as being built with Reynolds tubes before the record, after that phone call we were able to advertise that it was actually our tubing used.

“In 1976 my father’s industrial business began to decline, so he allowed me to separate and create Columbus just for bikes. Even later in his life my father continued to enjoy the cycling industry. He remained close with Cino, and he was happy.

“At the time Cino was still the sole distributor of Columbus tubing, and I had to ask him to take the business back. Cino replied he knew who to sell to and who not to, and at first we had some tough negotiations. In the end he gave me a good deal, thanks to the friendship of the family. This was when I partnered with his son and also purchased Cinelli from him.”

A (BRUSH) STROKE OF LUCK

As popular as Antonio’s efforts with both Columbus and Cinelli were in the bike world, it was a chance meeting with a New York bike messenger in the late ’80s that shot the Cinelli brand into the stratosphere of worldwide recognition.

Simply put, not since Marcel Duchamp’s “Bicycle Wheel Readymade” shook the art world in 1913 has any bicycle melded the disparate worlds of high art and cycling as the Cinelli Laser with disc wheels painted by Keith Haring did. And the story of how it came to pass is one of the more humorous and intriguing that I have ever heard.

As Antonio recounts, “I’ve always been passionate about art, and when he was visiting some galleries in Milano we met, as I knew he was also interested in bikes. This was all back in the mid-’80s, and I remember also being with him at City Cycles in Brooklyn when I visited New York. Back then Keith was happy to paint for free if you were a friend, so I asked him if he would be interested in painting one of my bikes in trade for a mountain bike, and he agreed. 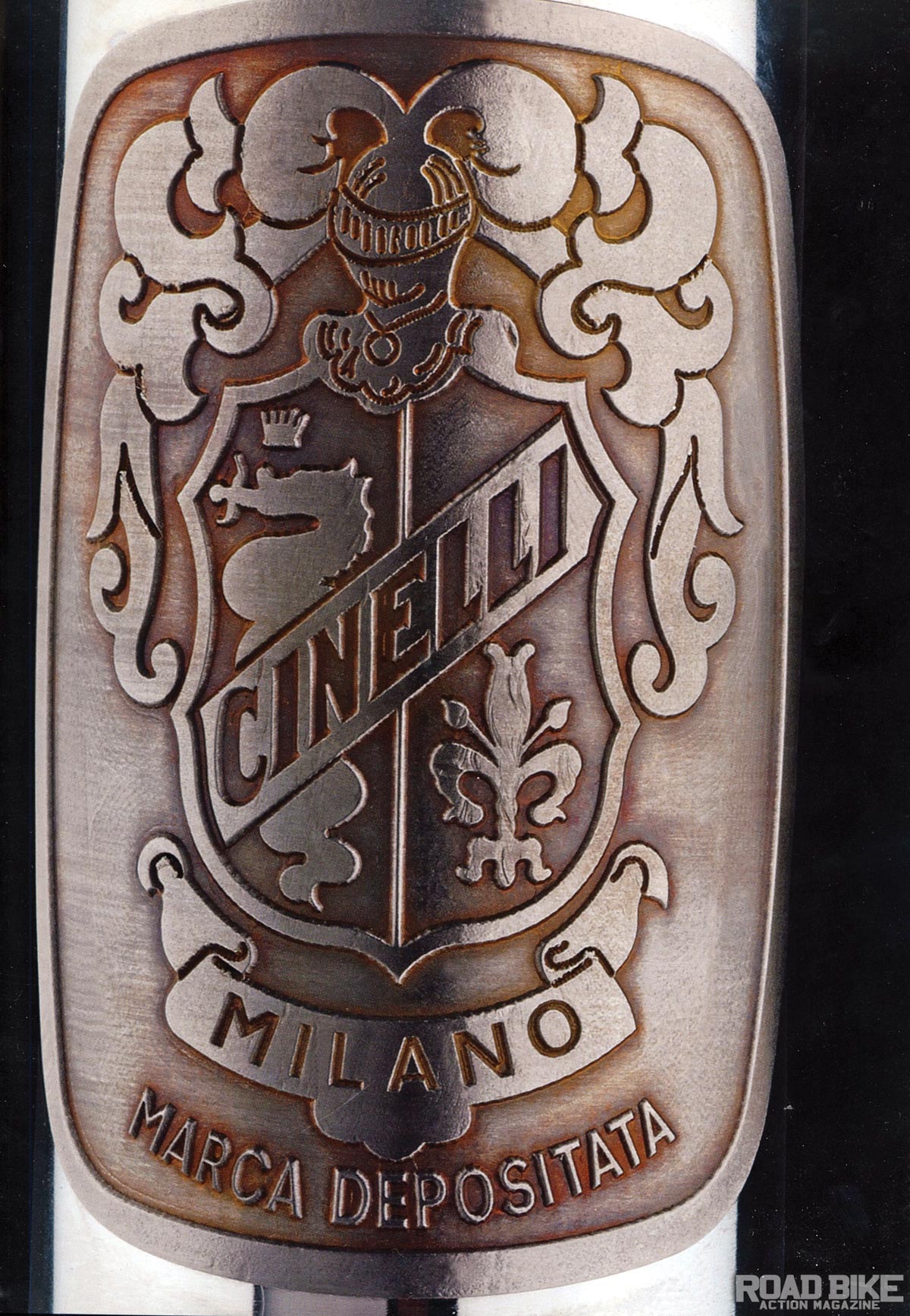 “So, I sent him a Laser, and when it was returned, he had only painted the disc wheels and not the frame. To be honest, I was a little disappointed! He later told me that he left the frame unpainted because it was a piece of
art itself.”

“In later years, though, I picked up the most human part of what Columbus was responsible for—the bicycle.”

When I pointed out the vast, vast—no, I mean really vast—difference in value of the trade between whatever crappy Cinelli mountain bike Antonio had given Haring and the current value of an original Haring painting (actually, two of them), Antonio just smiled and gave what seemed like a slightly embarrassed shrug: “Let’s just say that the value of his work was equal to the value of the bike—at the time!”

For as many encounters as I have had with a wide variety of Italian racers, builders and owners over the years, in the attempt to zero in on what makes their industry so unique, I’ve always made sure to ask one question: “What is it about Italy?”

“We have many versions, ideas and interpretations of what the bicycle is. And among all the different companies, there is much competition. I call it a funny drama, and we are all smart enemies. For me, Dario Pegoretti shared a similar feeling about life, music, art and fantasy. We were not proper businessmen.

“I think,” Antonio replies before pausing, “more than any other country, Italy has lived longer with the bicycle. As a country, as a people, we are connected to the bicycle. This is what provides our heritage.”

HOW TO POSITION YOUR ROAD SHIFTERS