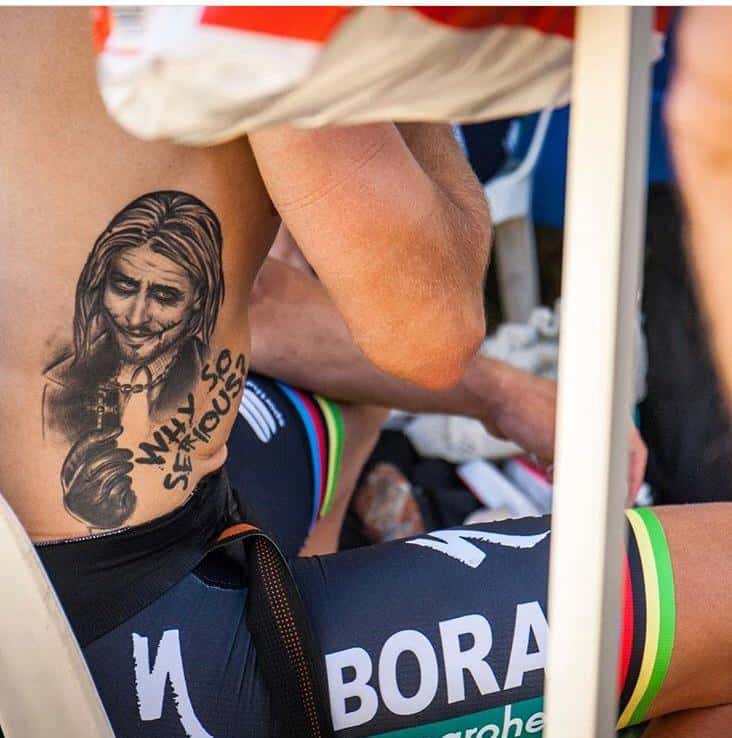 When it comes to Peter Sagan things are always entertaining and his new choice in ink is the same. The Joker style “Why So Serious?” tattoos seem to be all the rage and Peter is now contributing with his self-portrait located on his right side. This shot from TBS Photography at the Tour Down Under is great but what do you think of the ink? Let us know at [email protected]. 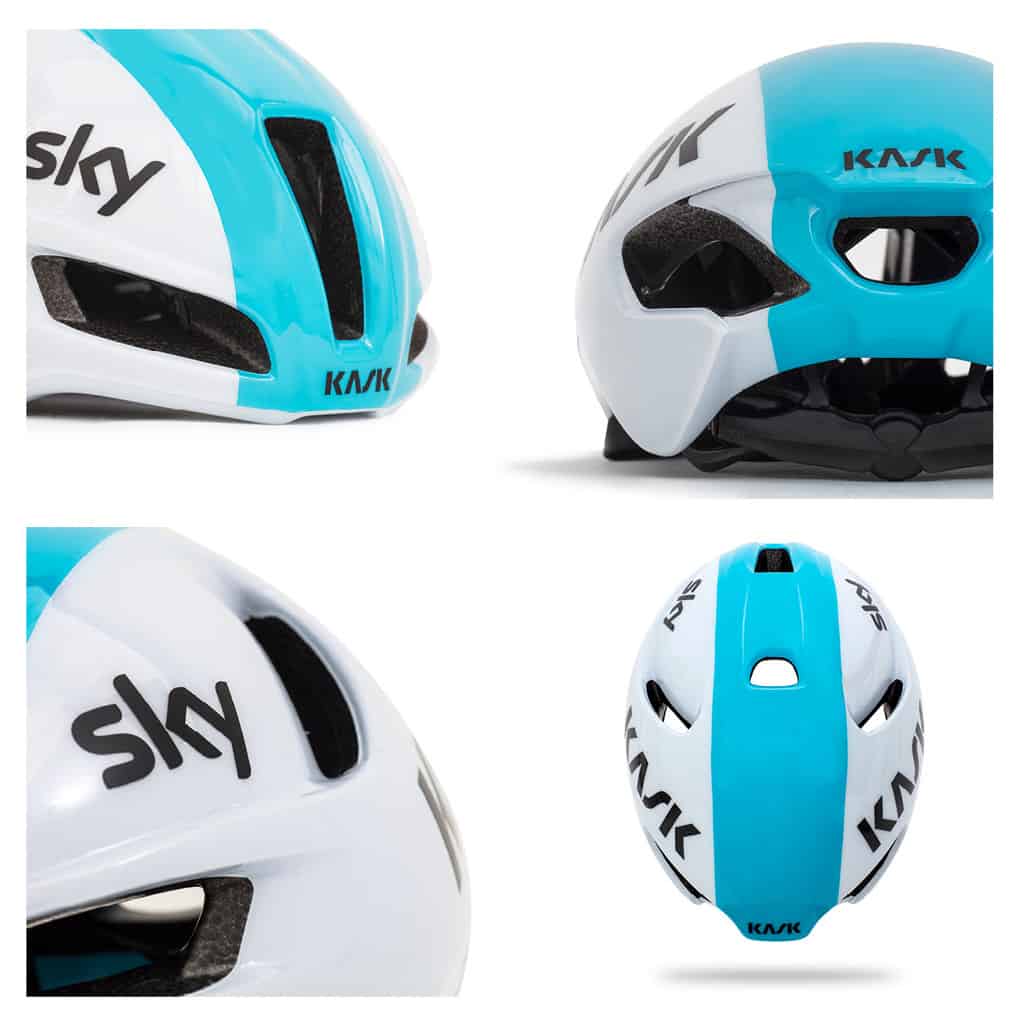 KASK have unveiled their most aerodynamic road helmet, which be available to buy later this year. The Utopia offers the very latest technology in aerodynamics and ventilation, giving cyclists a super-fast ride while retaining excellent safety and cooling capabilities.

Like many other KASK helmets, Utopia has been developed with Team Sky to ensure the helmet is designed and tested in the toughest conditions possible and able to withstand the demands of even the most prolific riders.

To develop the Utopia, KASK tested 10 of the best road aero helmets on the market in the wind tunnel, and created a 3D scan for a computational fluid dynamics (CFD) simulation. The helmets were tested at various speeds and yaw angles to reflect cross winds. At the end of the test, the drag data of Utopia versus the best competitor helmet resulted in a saving of up to 6 watts when riding at 50kph. Aerodynamics is at the forefront of Utopia’s design with ventilation also a key factor considered during its development. Suitable for riding road racing and triathlon, Utopia can be used year-round in all climates, due to its refined design to keep the rider cool, especially when riding at high speed.

Utopia uses a breathable and quick-dry padding, offering a 5mm layer of fast-wicking material called Resistex®* that takes moisture away from the rider’s head and moves it to the helmet’s outer shell, contributing to a helmet that’s comfortable to wear all day.

Team Sky will first race using Utopia in the Santos Tour Down Under, according to the stage profiles, and will wear them in white to match the team’s new look for 2018. Utopia will be available later in the year. 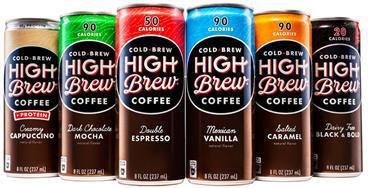 If you’re looking to try some new coffee you may want to check out High Brew which is a cold brew made “for those who do.” The company has targeted the cycling community as they can easily be thrown into a bag and brought on the go.

High Brew products are bold, smooth, delightfully sweet, full of antioxidants, higher in caffeine AND lower in sugar that come in a variety of flavors including Double Espresso, Mexican Vanilla, Salted Caramel, Dark Chocolate Mocha, and Black & Bold. We also have a Creamy Cappuccino + Protein flavor which is loaded with 25% of the recommended daily amount of protein.

TOUR DOWN UNDER STAGE 1 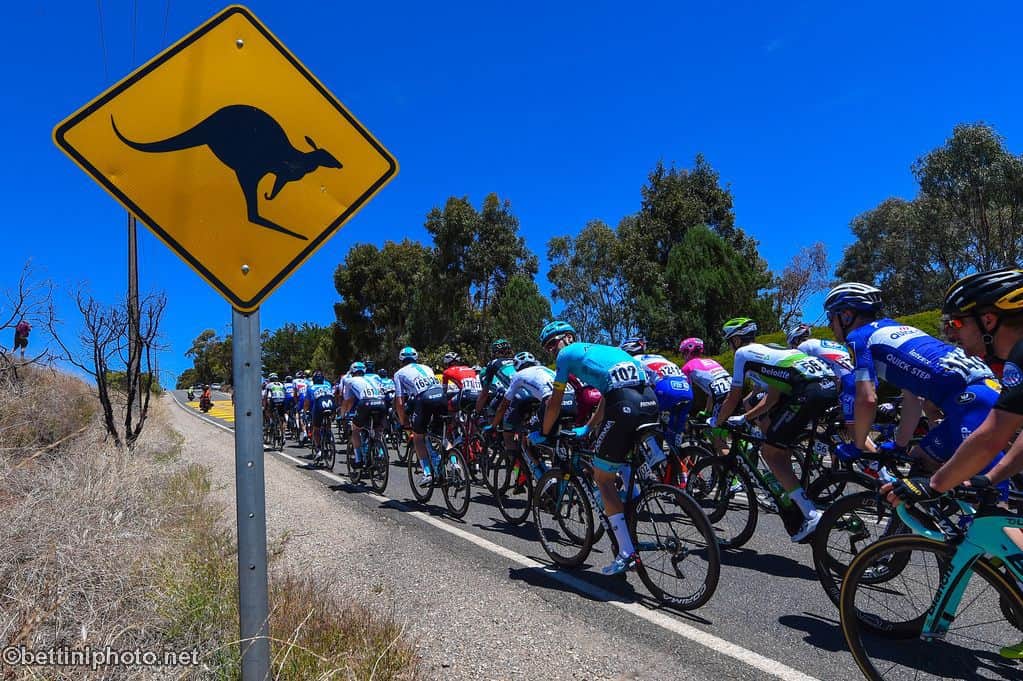 Germany’s Andre Greipel opened his 2018 season in style when he claimed the first stage of the Tour Down Under in the South Australian town of Lyndoch on Tuesday. Greipel timed his final sprint to perfection to overpower young Australian Caleb Ewan in the last 50 meters and claim a record 17th stage win in the first UCI race of the year.

World champion Peter Sagan from Slovakia (BORA-Hansgrohe) edged Italian Elia Viviani (Quick-Step Floors) to take third, with another Italian, Simone Consonni (UAE Team Emirates), in fifth place. Favorites for the general classification Richie Porte and Jay McCarthy finished safely in the peloton in a stage that was designed to produce a sprint finish in the wine-growing Barossa Valley town.

Greipel said the sprint had worked out perfectly for him. “It was a pretty fast sprint but I thought I could wait as long as possible and I did a nice sprint I guess,” he said. “It’s nice to be back here this way after a few years of absence. Because of the heat, the racing isn’t that stressful. We were one guy down (Bjorg Lambrecht) but my team set the sprint really well.” 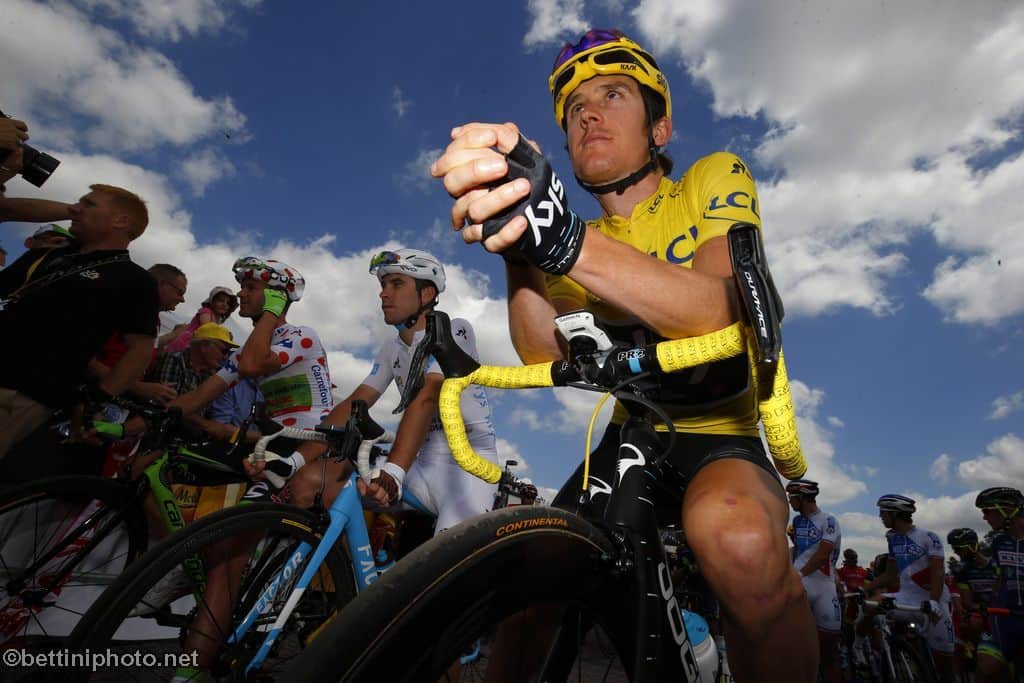 AFP – The 2019 Tour de France will start with two stages in and around the Belgian capital Brussels in a tribute to Eddy Merckx, race organizer Christian Prudhomme confirmed on Tuesday. The first stage will be 192km, setting off from the city’s Royal Museums of Fine Arts and taking in the Lion’s Mound on the battlefield of Waterloo, the home town of football star Eden Hazard and the Mur de Grammont, a steep climb used on the Tour of Flanders.

The following day will see a 28km team time-trial from the Royal Palace to the Atomium, one of the city’s most famous landmarks. The 2019 Tour will mark 50 years since Belgian great Merckx first took the overall race leader’s yellow jersey on home soil at Woluwe-Saint-Pierre near Brussels, where his parents ran a grocery shop.

Now 72, Merckx, nicknamed The Cannibal, won that year’s Tour de France and went on to win it a record equaling five times overall, the last in 1974. “It was important to start in the home city of the champion who has worn the yellow jersey more times than anyone else,” said Prudhomme. The 2019 Tour will mark 100 years since the introduction of the yellow jersey. Brussels previously hosted the ‘Grand Depart’ of the Tour de France in 1958. 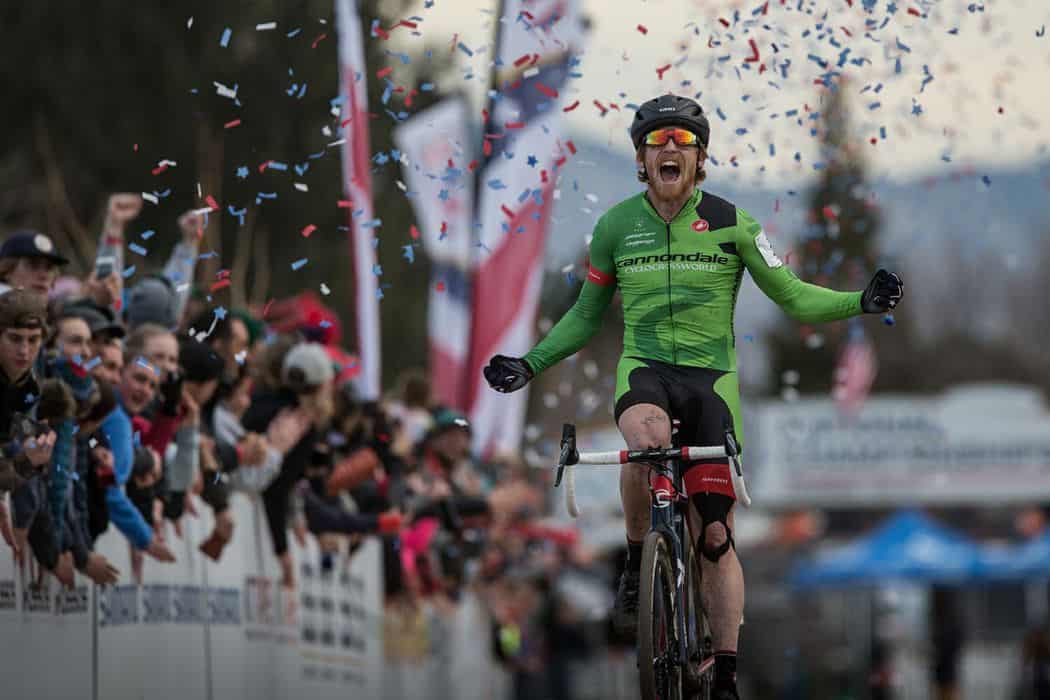 Stephen Hyde recently just won his second straight career Elite CX National title. Prior to the start of this season we had a great interview with him discussing his cycling career and how he got to the point where he currently is. It’s great to see all of his hard work paying off as he is having great success this season. photo: PinnedGrit 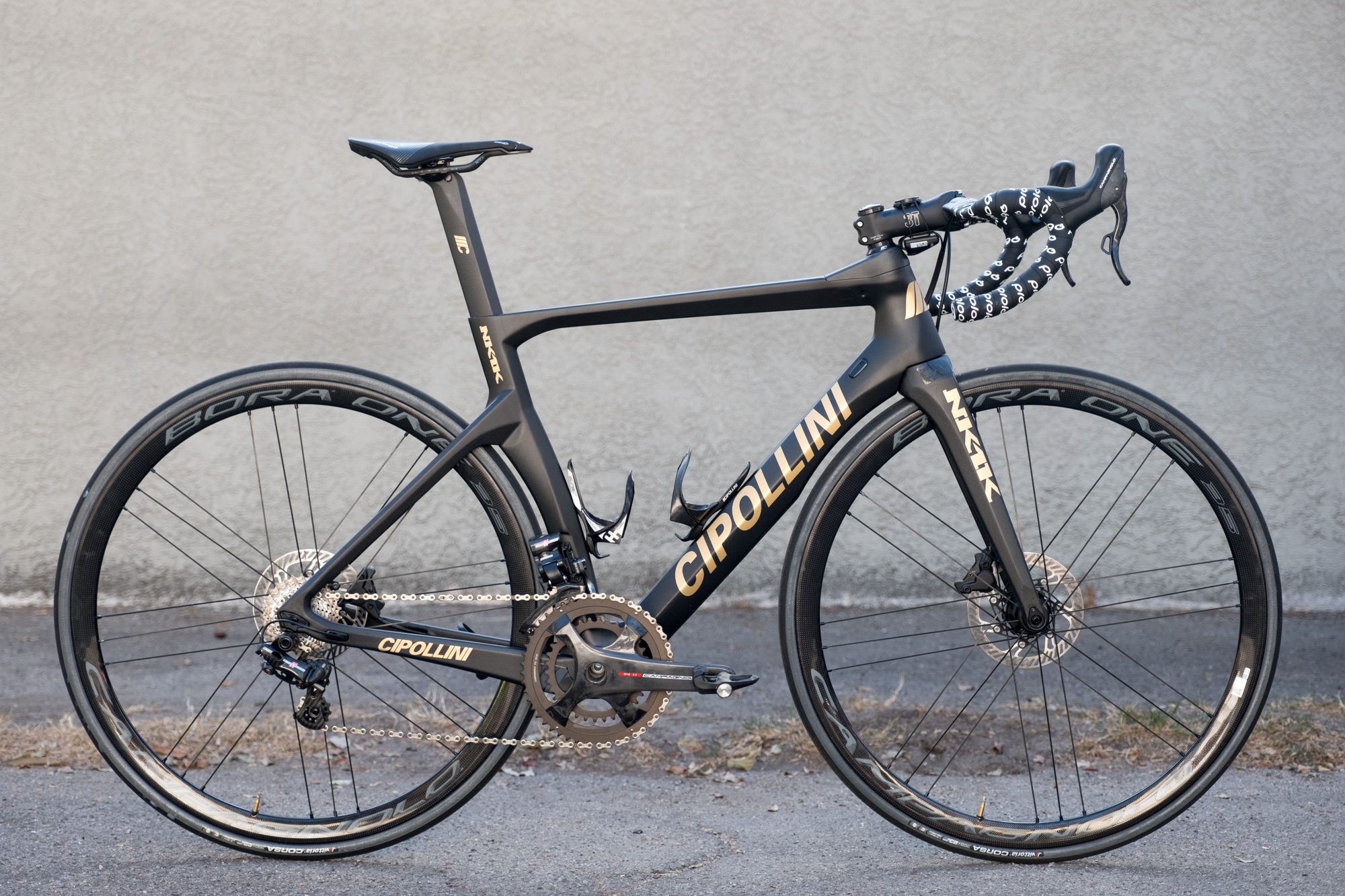 Good news, the march towards our annual Euro Issue is in full stride and one of the bikes we have lined up is the truly stunning Cipollini NK1K Disc. Made in Italy with superb craftsmanship through-out, our test bike was outfitted with the full compliment of Italian go-fast components: Campagnolo Super Record EPS electronic drivetrain with the Super Record hydraulic disc brakes and Bora One carbon clinchers mounted with Vittoria Corsa tires, ProLogo saddle and 3T stem and handlebars.

What’s that you say? You don’t know who/what/or where a Cipollini is? Long before the sensational Peter Sagan electrified the bike world and kept us on the edge of our seats with brilliant, elbow-to-elbow, sprint wins, there was the one – and definitely the only – Mario Cipollini. The Super Tuscan rose through the ranks on some top Italian teams before finding his first great publicity and race winning platform with Saeco Cannondale. Eventually he later hitched a ride with Specialized with more success, before closing out his career on a Bianchi. – Zap 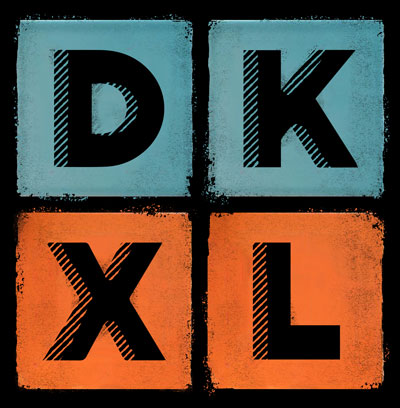 DKXL is a 350-mile-long gravel cycling adventure through the Flint Hills region of Kansas. DKXL will be held in conjunction with Dirty Kanza weekend, June 1-3, 2018, adding to current DK distance options of 200, 100, 50, and 25 miles.

“DKXL is Dirty Kanza, taken back to the very basics of gravel. It’s the DK that Joel and I first set out to create in 2006. It’s long. It’s hard. It’s Extra-Large. It’s totally rider-self-supported,” says Jim Cummins, Executive Director of Dirty Kanza Promotions.

QUINTANA TRAINING WITH THE LOCALS 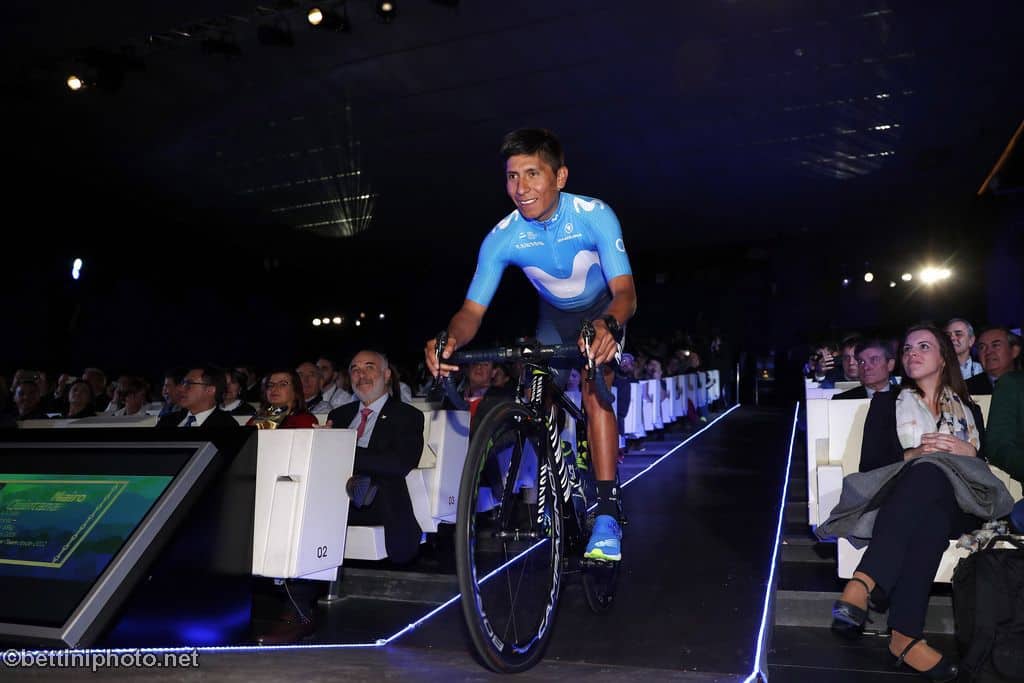 It’s not everyday that you get to ride alongside one of the greatest current cyclists, but when you do get the chance you better take it! Even if your just on a push scooter. Take a look here at Nairo getting some miles in with his new training partner.

We’re fortunate enough to have two of the exact same Factor bikes at our disposal currently with the only difference being one has rim brake’s and the other is disc brake model. This is the new classic discussion in cycling with are you a disc rider or rim brake rider. If you had to choose which would you pick?