Orbea brings their own style to the e-road rodeo 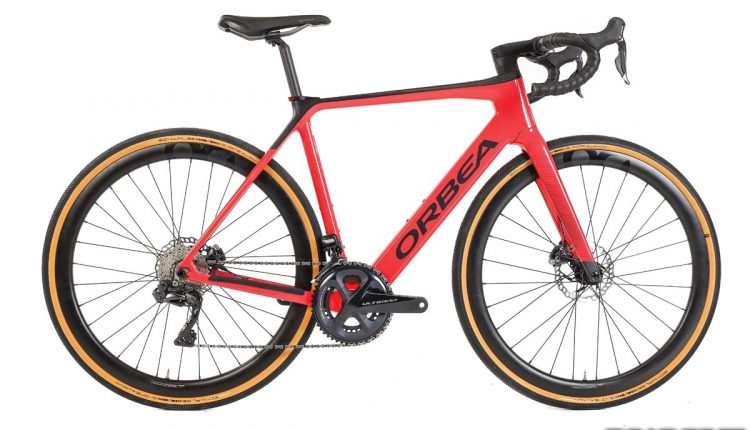 The inconspicuous rear hub motor is from Ebikemotion and has a maximum torque setting of 40 N/m with four levels of assist. This 250-watt motor uses a lock ring for the cassette that doubles as a sensor that tracks your pedaling input. The charge port is discretely placed right above the bottom bracket and can also be used to plug in the optional range extender.

Our test bike was spec’d with a complete Shimano Ultegra Di2 electronic drivetrain with 50/34t chainrings mated to an 11-speed (11-32t) cassette. Both Shimano brake rotors are 160mm.

The in-house carbon OC2 handlebars have 80mm of reach and 125mm of drop. The wheels are carbon, tubeless-ready OC2 rims and fitted with 30mm Schwalbe One tires. Orbea was kind enough to include a pair of 700×40 tan-sidewall gravel tires, which we swapped straight away for both their added traction, comfort and appearance.

You have the option of buying a separate battery they call a range extender that gives you another 200 Wh of battery life. The range extender is about the size of a water bottle and mounts where your water bottle normally would. You can also run an Ebikemotion display to tell you your battery percentage, mph and know what level of assist you’re in. Orbea has also integrated a really nice front and rear light that runs off of the battery.

We suited our test bike with Schwalbe 40mm G-One gravel tires to try something different. We headed out to some local fire roads and were surprised at a couple of things. We got a little off-course and actually took the Gain down a bit of bumpy singletrack. The impressive part was that for being a rear hub drive, the weight in the rear went relatively unnoticed. Though the weight in the rear wasn’t extremely obvious, it actually helped the traction, especially while leaning forward on some steep dirt sections we attempted.

“Though the weight in the rear wasn’t extremely obvious, it actually helped the traction, especially while leaning forward on some steep dirt sections we attempted.”

Riding in the dirt with standard road drop bars didn’t seem to hinder our test riders, though that setup wasn’t ideal for comfort. Yes, we managed our way through bumpy singletrack, but with an exceptional amount of rigidity. Orbea does claim this frame to be an endurance geometry, and in all fairness, the cockpit did feel really comfortable. Though the frame is stiff, long road rides would not be out of the question by any means.

At the end of the day, the Gain is not the bike to keep up with your big-gun road bike buddies on the weekend group ride. Like Bianchi’s e-Aria, the Gain is more fitting for someone looking to blend in nicely with a more recreational group ride and who might also need a little bit of assist here and there. It could be great as a recovery tool from injury or just a sweet-looking bike to go out and get your heart rate up while packing more miles on.

The Gain lineup consists of a family of bikes ranging in price from $2899 to $9300. Our $6000 test bike was the second-most expensive, but don’t forget the added upgrades available through Orbea’s Design Your Bike personalized spec program.

As we have noted previously with other 20-mph-max Class 1 e-road bikes, the Orbea is not the type of bike intended for fast-paced group rides. Yes, it has power assist, but the weight/power ratio is only enough for someone not in a hurry to get to the top of a climb. For that type of ease and speed, you would want something with a Class 3 motor with at least 75–85 N/m of torque.

We found the power button (located on the top of the top tube) a bit confusing at first due to the multiple functions it controlled. The button changes the power level, as well as turning the light on and turning the bike on and off. Just as we found with other bikes using the Ebikemotion system, it’s best to choose your power mode when you are not moving, as the different-colored blinking lights can be hard to read, so keep your eyes on the road!

Ebikemotion has a handlebar-mounted display unit that would be beneficial for knowing your range level (but it was not included with our test bike). Having the app on your smartphone can also give you all the same stats as the display. The Gain definitely has its place on the open road, and we think it would suit many applications, even if it’s just a casual weekend cafe cruise.

• Not for pulling a group ride along