UNBELIEVABLE: RIDERS DQ’D FROM TOUR OF FLANDERS FOR FIGHTING, LITTERING

Two riders, Otto Vergaerde and Yevgeniy Fedorov, were disqualified from the Tour of Flanders on Sunday after an angry clash at the head of the peloton. Later, Michael Schaer was thrown off the race for ignoring new rules on throwing away water bottles and food-wrapping. With barely 15km gone in the Belgian one-day classic but a break already up the road, Fedorov, who rides for Astana, moved to the front of the chasing pack. The shorter Vergaerde of Alpecin accelerated to draw level, directed an angry word at the Kazakh and then ducked a shoulder and swerved into him. Fedorov responded by accelerating, swerving in front of the Belgian and braking. The race commissioners disqualified both. Vergaerde is a teammate of 2020 champion Mathieu van der Poel.

Alpecin sports director Christophe Roodhoft told Belgian broadcaster Sporza that Fedorov had upset other riders, including Lukas Poestlberger of Bora-Hansgrohe, by the way he advanced through the peloton.

“Unfortunately, he reacted impulsively. If the ref shows red, you have to leave the field.” Vergaerde also blamed Fedorov.

“Fedorov wanted to go across to the early break, but he slammed his brakes,” said Vergaerde, interviewed by Sporza while on his bike. “I almost crashed and reacted. It is a great pity to let the team down like this.” 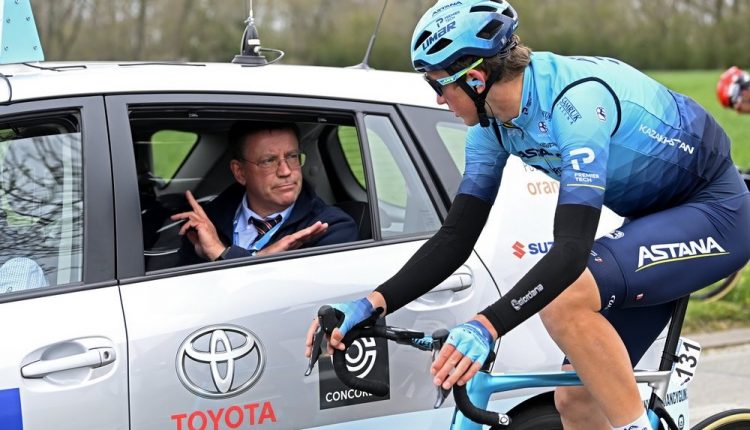 Yevgeniy Fedorov (KAZ - Astana - Premier Tech) - discussion with the president of the jury. 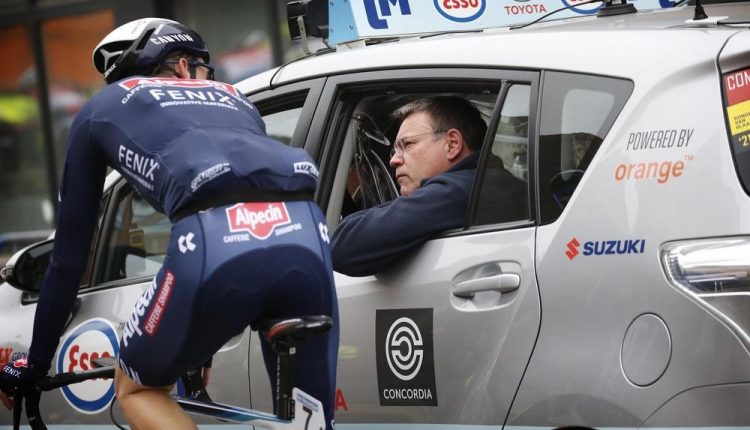 Otto Vergaerde (BEL - Alpecin-Fenix) eliminated from the competition by the judges.
Prev 1 of 2 Next

Swiss veteran Schaer of AG2R-Citroen followed cycling tradition and threw an empty water bottle in the direction of some of the few fans by the side of the road and fell foul of an anti-littering rule introduced on April 1.

The International Cycling Union has stipulated the creation of ‘litter zones’ every 30-40km to “allow the riders to get rid of their waste in a way that respects the environment.”

In stage races, the first offense draws a 30-seconds penalty the second a two minutes penalty and the third disqualification, but in one-day races the offense leads to immediate disqualification.

On Saturday, American Kyle Murphy became the first rider sanctioned at the GP Indurain in Spain.