Belgian Wout van Aert produced a solo break for the ages to win stage four of the Tour de France and extend his overall lead in swashbuckling style on Tuesday. After coming second on each of the first three stages in Denmark, the Jumbo-Visma man finally tasted victory when he crossed the finish line in Calais eight seconds ahead of the fast-closing peloton. Van Aert’s feat was a rare act of brilliance that will live long in the memory, and makes up for the disappointment of his three narrow misses.

“But we planned it, both for the GC and the green jersey, there were 50 points today,” said the overall leader who also tops the sprint standings.

“They say third time lucky, but for me it was the fourth.”

There was nothing lucky about it.

After 100 miles of racing dominated by two escapees, Van Aert’s Jumbo team launched a blistering attack on a short, steep climb around 6 miles from the finish. Dressed in the yellow jersey as the race leader, Van Aert crossed the summit first and alone after a relentless scrap up the incline.He then powered over the final 5 mile at speeds up to 55km/h, waving his arms  in mock flight at the finish.

“This is an exceptional, a really special moment,” said Van Aert. 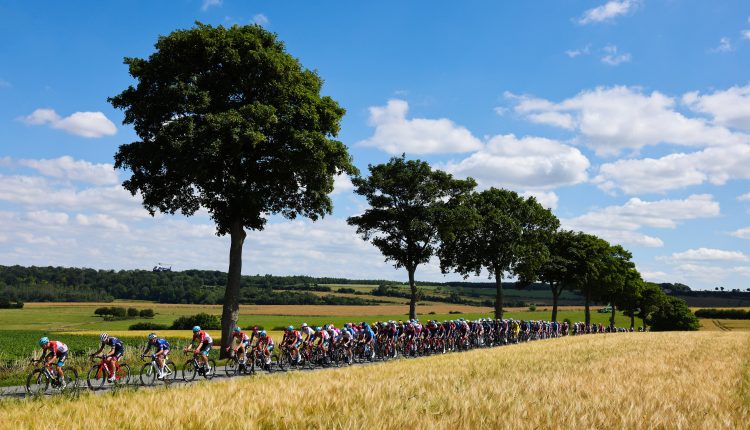 106 mile between Dunkirk and Calais on tap for the peloton. 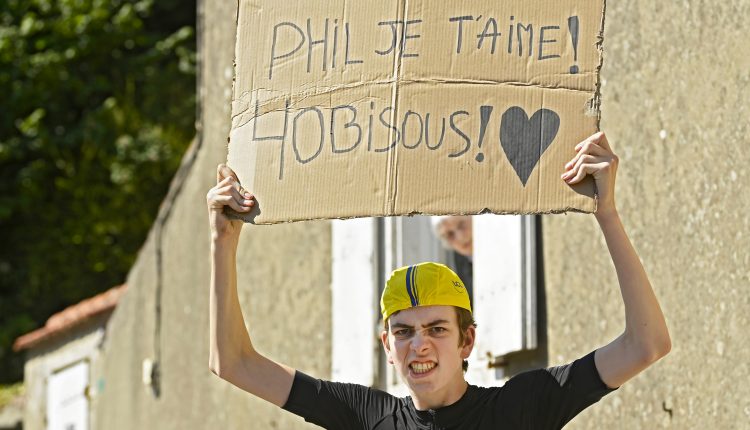 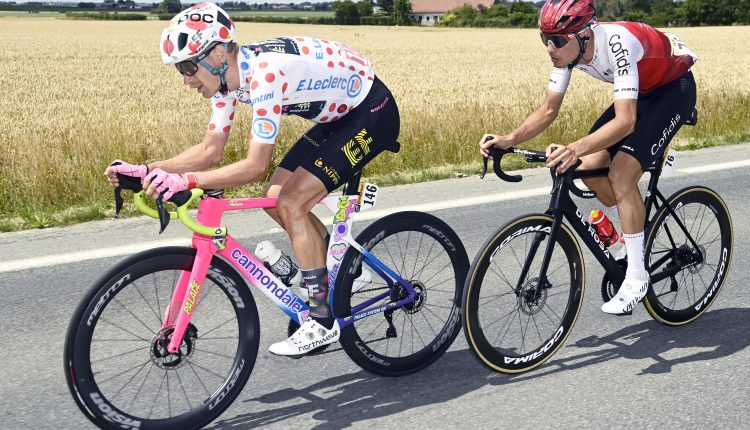 Danish star Magnus Corta and Anthony Perez led the are for most of the day. 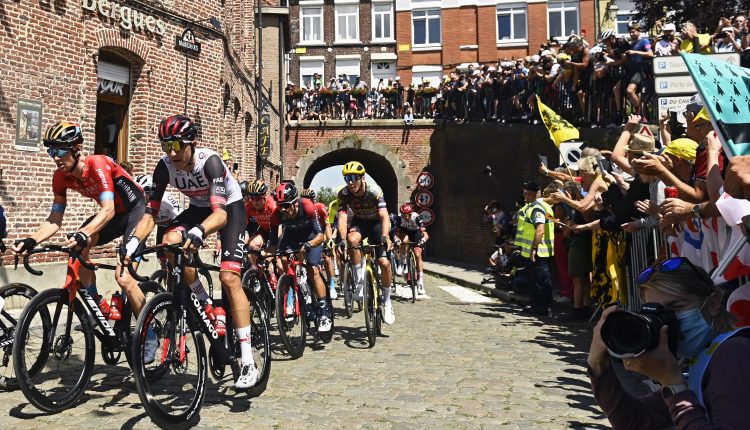 The French turned out for the first stage on home soil. 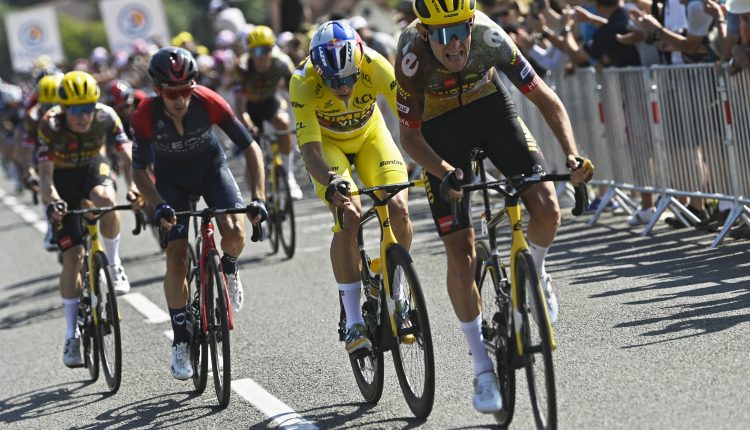 Jumbo Visma launched a premeditated attack with just over six miles to go. 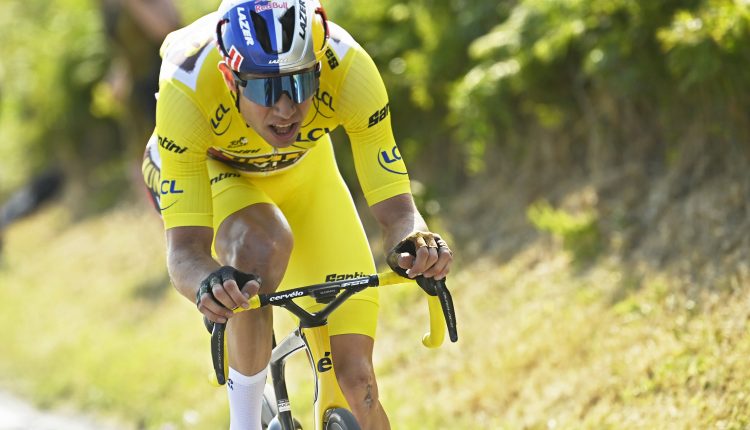 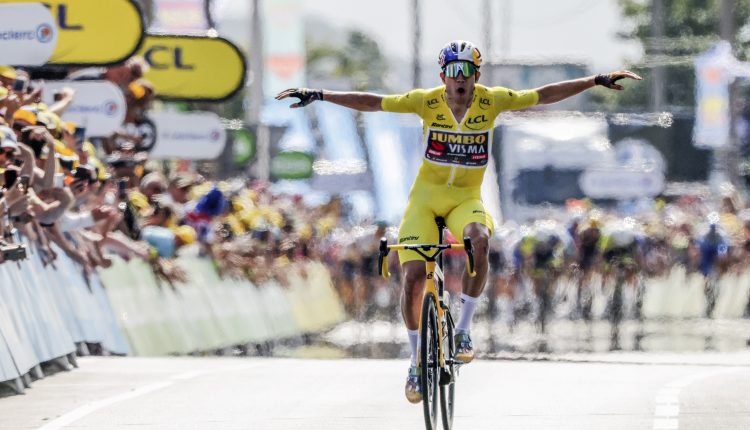 Soaring to victory in Calais.

Yellow secured for another day.
Prev 1 of 8 Next

Behind him, Alpecin rider Jasper Philipsen won a bunch sprint for second and briefly celebrated believing he had won the stage.

“It’s a shame for Philipsen, we shouldn’t laugh at him,” said Van Aert.

“I thought I’d won for about five seconds. It’ll look funny watching replays in years to come,” he said.

“We were quite a way behind on the hill and I didn’t see them get away,” he explained.

“I celebrated and now I feel ashamed.”

Van Aert leads stage one winner Yves Lampaert by 25 seconds in the overall standings, while defending champion Tadej Pogacar is third at 32 seconds.

“If I could take the yellow tomorrow I wouldn’t say no,” said the 23-year-old Slovenian who races for Team UAE Emirates.

Jumbo pair Jonas Vingegaard and Primoz Roglic are sixth and seventh at 38 seconds and 40 seconds respectively.

Ineos trio Yates, Tom Pidcock and Geraint Thomas lurk just a few seconds behind the Jumbo men. Dane Magnus Cort Nielsen showed his ability on the first day in France after he emerged as the hero of the Danish Grand Depart taking the climb points jersey.  He again won most of the climbing points and stays top of the King of the Mountains standings. His escape companion, Anthony Perez of Cofidis, outlasted Cort Nielsen across the marshes, over the canals and picturesque villages as the peloton closed in and was awarded the prize for the day’s most aggressive ride. Many fans were holding up signs wishing a happy birthday to Belgian rider Philippe Gilbert as he turned 40.

“If you’d told me I’d still be here 10 years ago, I would never have believed it,” said Gilbert.

Wednesday’s stage is a bone-shaking 95 mile run from Lille to Arenberg taking in 12 miles of cobbled mining roads and will also suit the all-rounder Van Aert. The stage could be crucial for the overall standings between the GC  contenders.