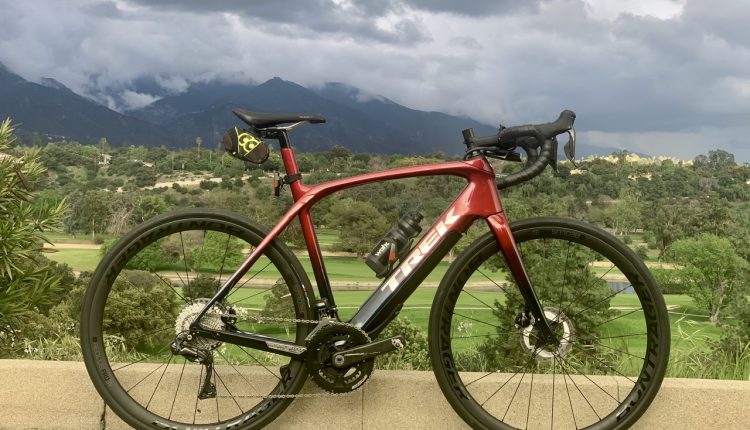 When it comes to cycling, we all have our own unique version of what we want it to be. For some, it’s performance gains at all costs, while others just want to enjoy a longer day in the saddle. No matter what drives you to ride, the important thing is that you’re riding, and this is where the arrival of the e-bike has brought with it a new day of cycling for cyclists, both new and old.

What the e-bike market has brought to the sport is not just recognition of, but a solution to, that vexing dilemma that’s long defined the cross-purposes of cycling—people love to ride, but they don’t all like to suffer. We love the wind in our face and the feeling of an elevated heart rate to make us feel alive. Well, maybe only so much of the latter! 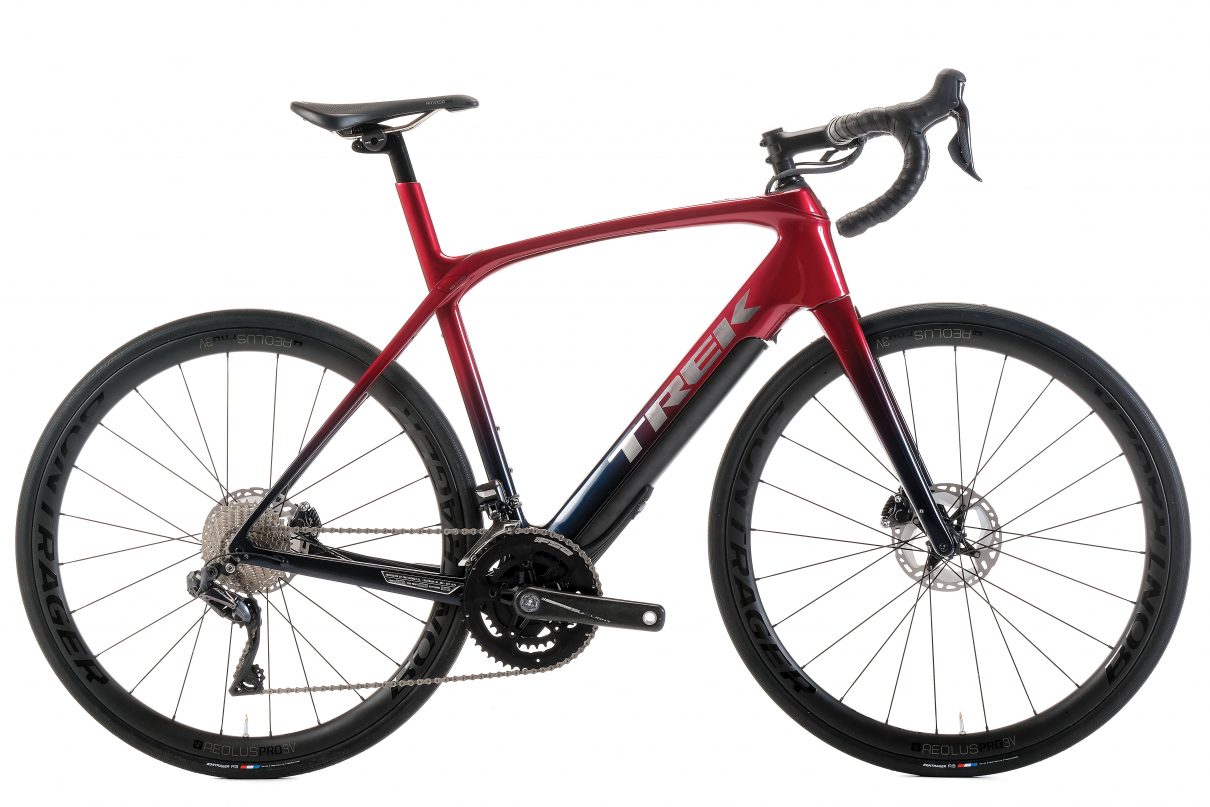 For the last few years Trek has pursued the e-road market with Bosch-powered bikes. New for this year is the line of Domane+ that relies on the equally German-designed Fazua powerplant.

The Domane+ range of bikes comes in three models, and they all share the same 500-series OCLV carbon frame. Like the non-assist Domane frames we have tested in the past, the Domane+ uses their proprietary front and rear Isospeed suspension.

The endurance geometry helps bring long days in the saddle with confident handling. Our size 56 has an effective top tube of 55.4cm for a reach of 37.7cm. There is a 16cm-tall head tube and a stack of 59.1cm. There is a 42cm-long chainstay with a wheelbase of 102cm. Frame and fork clearance leaves massive room for tires, and we tested up to a 40mm with room to spare.

The frame uses flat-mount disc brakes, and the fork has 100x12mm spacing, but the rear uses 148x12mm spacing (142x12mm is the road disc standard.) What makes the frame unique is the downtube fits the entire Fazua system inside. When the battery and motor are removed, it leaves a huge opening, exposing the internally routed brake hose and wires. The Fazua bottom bracket remains bolted to the frame, but the rest of the system is detachable. 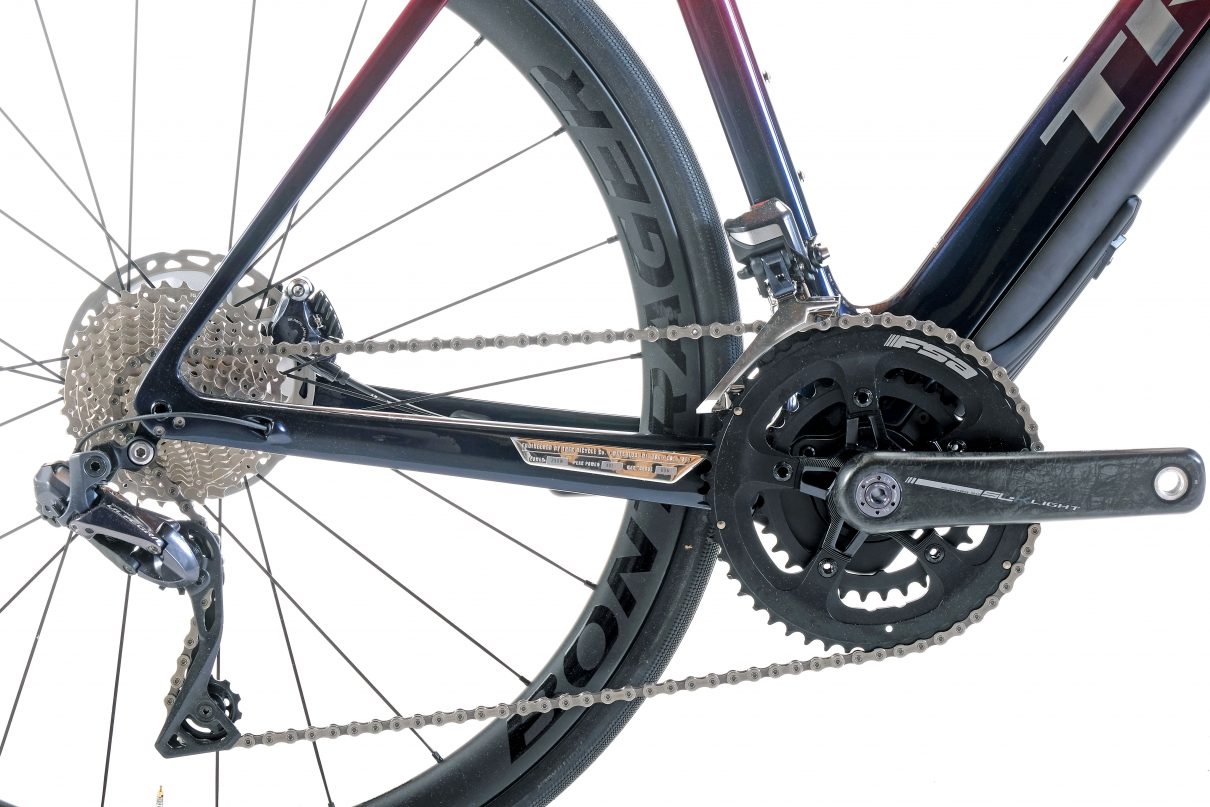 Despite a handful of e-bike-specific parts, the bike uses many of the same components you’d expect to find on a regular road bike. Our middle-tier LT 7 runs on the always reliable Shimano Ultegra Di2 drivetrain with hydraulic disc brakes mated with 160mm rotors. Since the Fazua system requires a speed sensor, Trek as a custom-wired sensor near the rear axle, and the rear Shimano rotor has an integrated magnet.

For changing gears, the Domane+ relies on a Shimano Ultegra Di2 drivetrain. The rear 11-34 cassette is mated to a 50/34 FSA chainring combo that are pushed by 172.5mm FSA carbon crankarms. The Di2 system has its own battery and doesn’t rely on the power from the Fazua system. The Bontrager Aeolus Pro 3V carbon wheels are paired with 32mm tubeless-ready Bontrager R3 Hard-Case Lite tires. 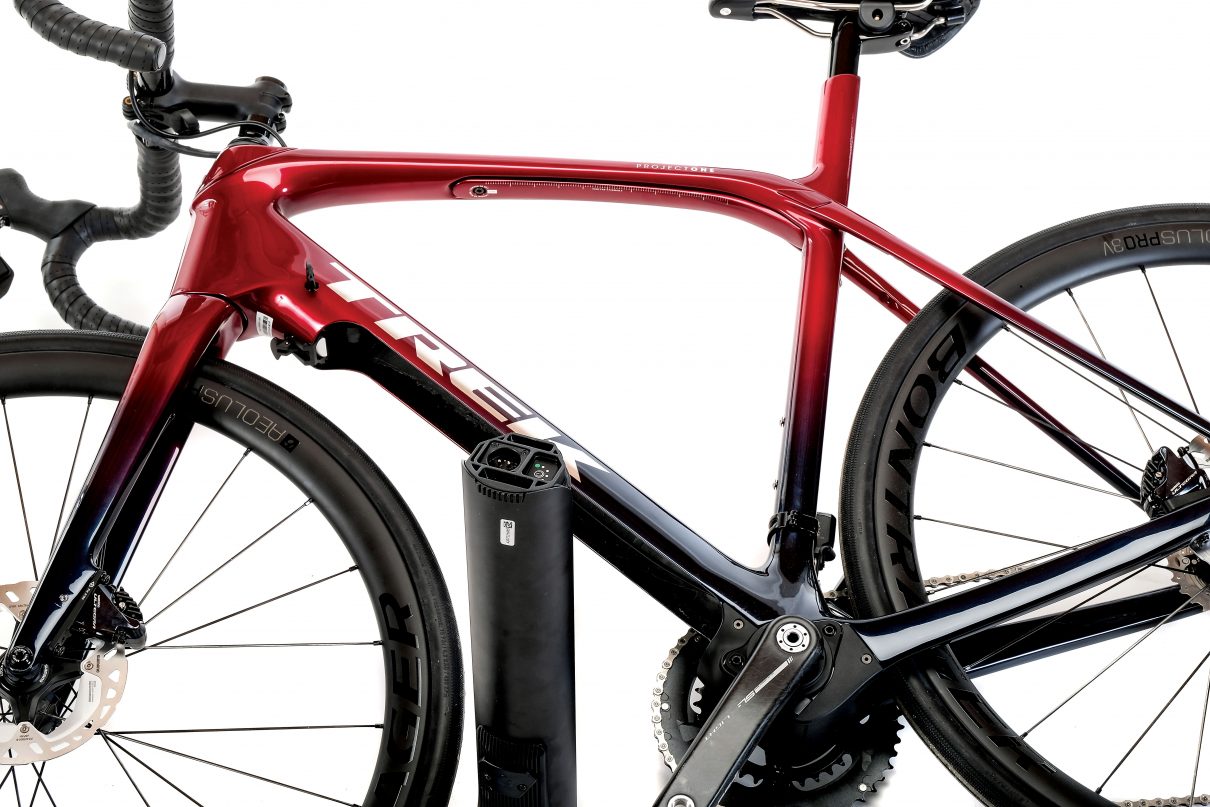 The Fazua system consists of four parts. First is the removable drive pack that houses the 250-watt, 60 N/m motor and weighs 1917 grams (4.22 pounds). A 252-Wh battery that weighs 1393 grams (3 pounds) is removable and slides into the drive pack for direct connection to the motor. This all locks into the frame and connects to the proprietary bottom bracket that’s an angular gearbox and includes integrated electronics for a two-sided torque measurement and additional cadence measurement. Last is the Remote FX, which is integrated into the top tube. This allows the switch between different assistance levels using the touch interface while also indicating battery charge and system status with five multicolored LEDs. An intelligent light sensor also adapts the LED brightness to external conditions. 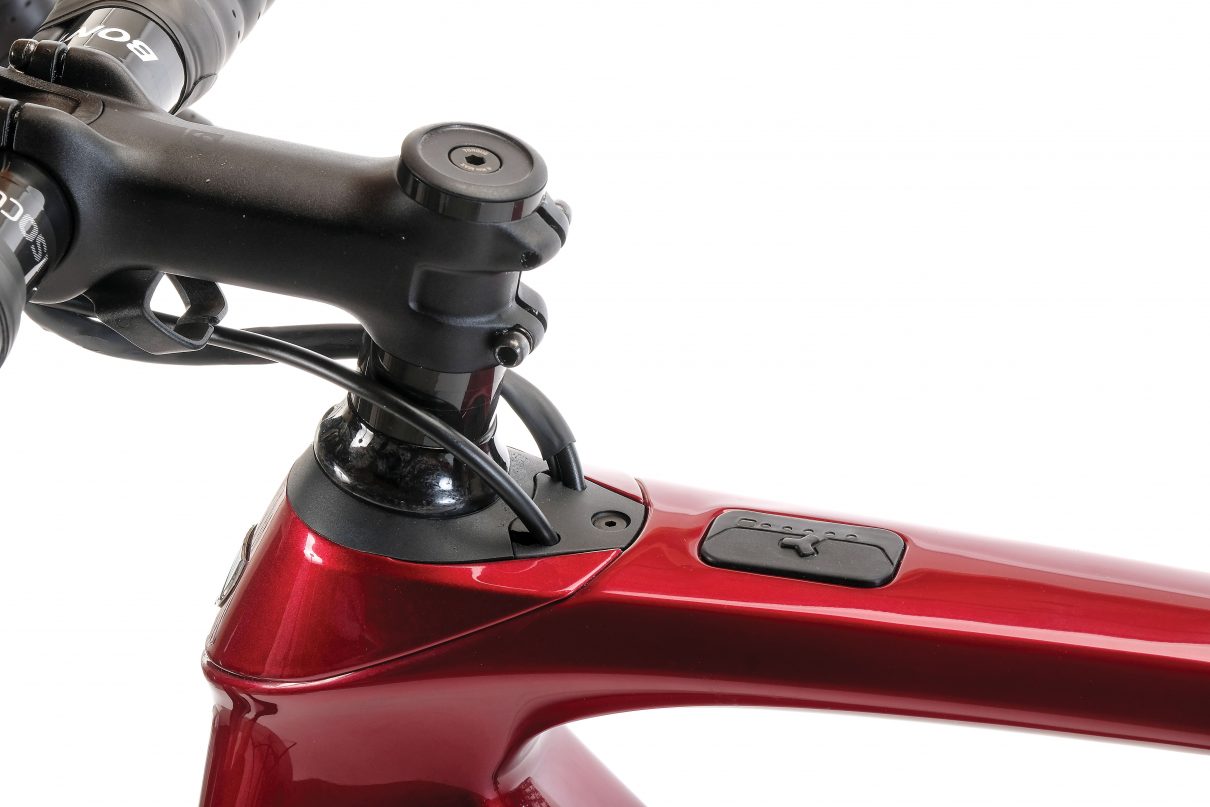 First things first, we had to charge the battery, which takes about four hours. The drive pack has to be removed from the frame to do so, and the supplied Abus key is mandatory to unlock and remove the unit. It is also worth noting that you will always need the key to power on the system.

On the road the bike feels like a normal Domane with a bit of added weight. You really only feel the weight when out of the saddle, and after about an hour on the bike, it didn’t bother us much, and we became accustomed to it. With the drive system off or at speeds over 20 mph, there is no added drag or resistance. The bike pedals just as any normal bike would, but there is a slightly wider 165mm Q-factor of 165mm (Ultegra R8000 cranks are 146mm.)

The bike is laterally stiff, probably due to the sheer size of the downtube and the connection points for the Fazua system. It feels comfortable in the saddle, and this can be tuned to your liking with the adjustable rear Isospeed system. The front Isospeed seems very stiff and doesn’t seem to be as compliant as previous versions on the standard Domane. This is probably because of the added weight of the Fazua system.

Our test bike weighed in at 37.64 pounds. That’s fairly light for an e-bike, but 15–20 pounds heavier than our regular test bikes. You can remove the drive pack and battery to drop over 7 pounds, and Fazua offers an accessory downtube cover. 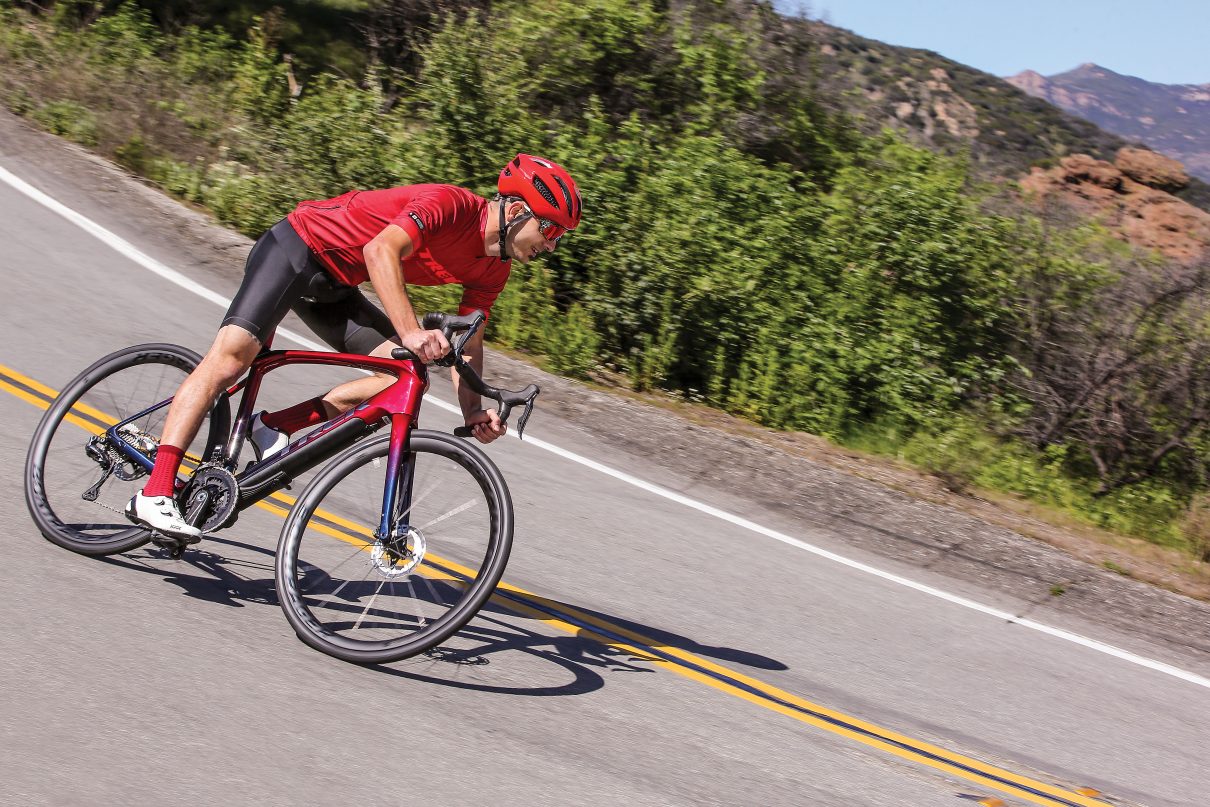 Cornering is fun on the bike, and the handling is confident. The bike responds quickly to rider input, but thanks to its 102cm wheelbase, it’s not jumpy or hyper-responsive. Out of the saddle the bike feels cumbersome, but with the motor mass positioned low, it minimizes the impact.

When you power on the system, the bike comes alive when speeds are below 20 mph. For us we would get a quick boost from a stop as we got up to speed, but most of our flat riding is between 22–28mph, so no assist was delivered. It’s when the roads tilt up and the climbing begins that the system kicks in and delivers three modes of assistance: Breeze (low with green LED), River (middle with blue LED) and Rocket (strong with pink LED), as well as no assist indicated by white LEDs. On sustained climbs that we would normally be doing between 10–12mph on the Rocket setting, we could sustain closer to 17 and 18 mph with the same level of rider input.

The power is not enough to propel you effortlessly up a steep climb, but more like the benefit of a tailwind or a friend pushing you. For us, we almost always ended our 40–60-mile rides with more than half the battery still remaining. We would leave the bike in the River mode for the most part and normally get about 2500–3500 feet of climbing. We didn’t change the way we pedaled or our effort, so unless we were going uphill, the motor was disengaged.

At the end of the day the Domane+ LT is a pretty sweet bike. It’s stiff, responsive and has a geometry that really suits everyone. There is room for road tires or gravel tires, and the weight of the Fazua system is minimal for an e-road bike. The 20-mph-assist cutoff level is a definite letdown for performance-level riding. If you have trouble staying in a bunch ride, this most likely will only make it harder, thanks to the added weight. Now, if things tilt uphill, then you friends better put their heads down and push, because you will be leading the group. 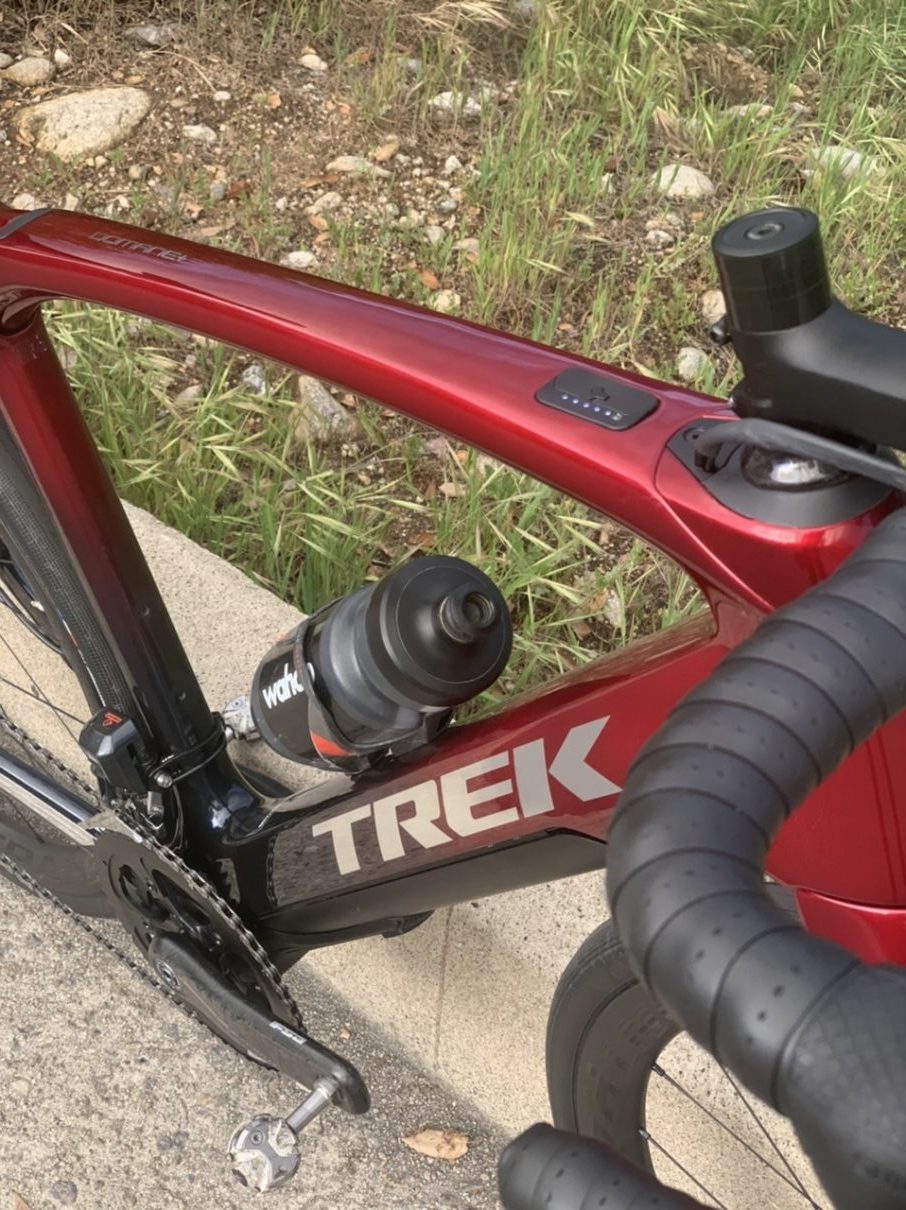 For us, it really comes down to the user experience. To charge, power on, or power off, we had to keep track of a key. There is no way to leave it unlocked, so don’t misplace it. Eight hours is a long-enough time that it probably won’t time out on you and go into its deep-sleep mode, but there should be a way to power this system on from the remote any time. There is also no connectability to a normal cycling computer. The system has strain gauges, cadence sensor and speed sensor built in, but no way to link it to your head unit. Sure, you can use their app, but honestly, that app was less than impressive, too.

There are three price points of the Domane +LT with a starting price of $6500 all the way up to $12,500. The builds are all pretty good, and on the Di2 versions, it’s nice that there is a Di2 battery so you can still shift with the Fazua battery turned off or taken off. Wheels might be a hard thing to replace since the rear hub is wider than the current standard for road bikes.

Despite its “road” categorization, the Domane+ LT would make for a pretty good gravel bike, because the speeds are lower so the motor could provide more usable assistance, and there is plenty of tire clearance. The only thing is the 252-Wh battery probably won’t last for a full gravel adventure. The wheels and tires are tubeless-ready, and with a 25mm internal width, they would be a great match for a 38 or 40mm tire.