Modern cycling shoes are trying to offer more by providing less. How do the latest high-end togs from DMT and Specialized compare?

If ever there was one person’s name that has been eternally tied to a relationship with shoes, it would be the fabled Disney princess whose life was inexorably altered when a pair of glass slippers freed her from a life of servitude.

Of all the different accessories that play a role in every cyclist’s life, it’s been our shoes that have kept us at a crossroads of form and function. Not only do cycling shoes play an important performance role, but let’s be honest, once we slip on a pair that have the look and feel we want, they also have a certain Cinderella effect that, too, can help carry us away.

Although dial closure systems have been around in some form or another for years, it wasn’t until Boa entered the market with their proprietary design, which they then licensed to the open market, when the shoe world really exploded with an array of creative, new designs.

In the last month we’ve been able to get our hands on two lightweight shoes that are definitely shaking things up—the DMT KR1 and the Specialized S-Works EXOS. What makes them special, and how do they compare?

That is unless we’re talking about the latest high-end shoes from DMT and Specialized. Both shoes reach new heights in performance-oriented design by giving you less shoe. And priced at $450 and $500 respectively, neither comes cheap.

DMT: Giving credit where credit is due, just as the S-Works EXOS shoe followed Giro into the world of 300-gram shoes, the DMT KR1 rolls in the shadow of the Giro Empire Knit, which first brought knit material to cycling shoes in 2017.

Knit though it may be, the DMT is a totally different shoe from the Giro. Co-developed with world-class sprinter Elia Viviani, the KR1 is more performance-oriented, and it uses a 3D Knit material with integrated webbing for added support in the upper. The perimeter finish has a more plasticized feel than you’d expect when you hear the word “knit”.

The neoprene-like ankle collar acts like a sock-like cuff that tightly, but not uncomfortably, wraps around. Two readily noticeable features were the vented toe box and significant arch support. On the carbon sole there’s a small toe vent with a three-bolt cleat pattern and a replaceable heel pad.

The KR1 is available in three colors: Neon Orange, Stealth Black (with illumination) and the sensational tri-color version as used by Italian national champion Viviani.

Specialized: First things first, the latest kicks (as the kids would say) from Specialized hit the scales at just 304 grams per pair. Although playing in the same ballpark as Giro’s Prolight Techlace, which came in a few grams heavier (without a BOA dial), 304 grams is about what a single shoe from most other brands weigh.

In addition to the single BOA closure, what also plays a significant role in keeping the weight down is the Dyneema material used for the top part of the upper. The Dyneema has a visual and tactile resemblance to sail cloth and seems more durable than the material used below.

“Paper thin” is the most accurate way to describe the material used for over the toe box, which Specialized refers to as a “stretchy, adaptive material”. Different from any other shoe material we’ve seen, it has a beguiling look and feel. While we weren’t about to take a sharp object to our new shoes at the threat of ruining them before we rode with them, we nonetheless tested the toe box material by poking our fingers into it hard enough that we thought for sure it would tear. Luckily, it didn’t.

The EXOS uses a Body Geometry sole and footbed, and thankfully a small pull-tab on the heel. The BOA dials rotate in opposite directions (clockwise on the right shoe and counterclockwise on the left) and pop up for quick release. 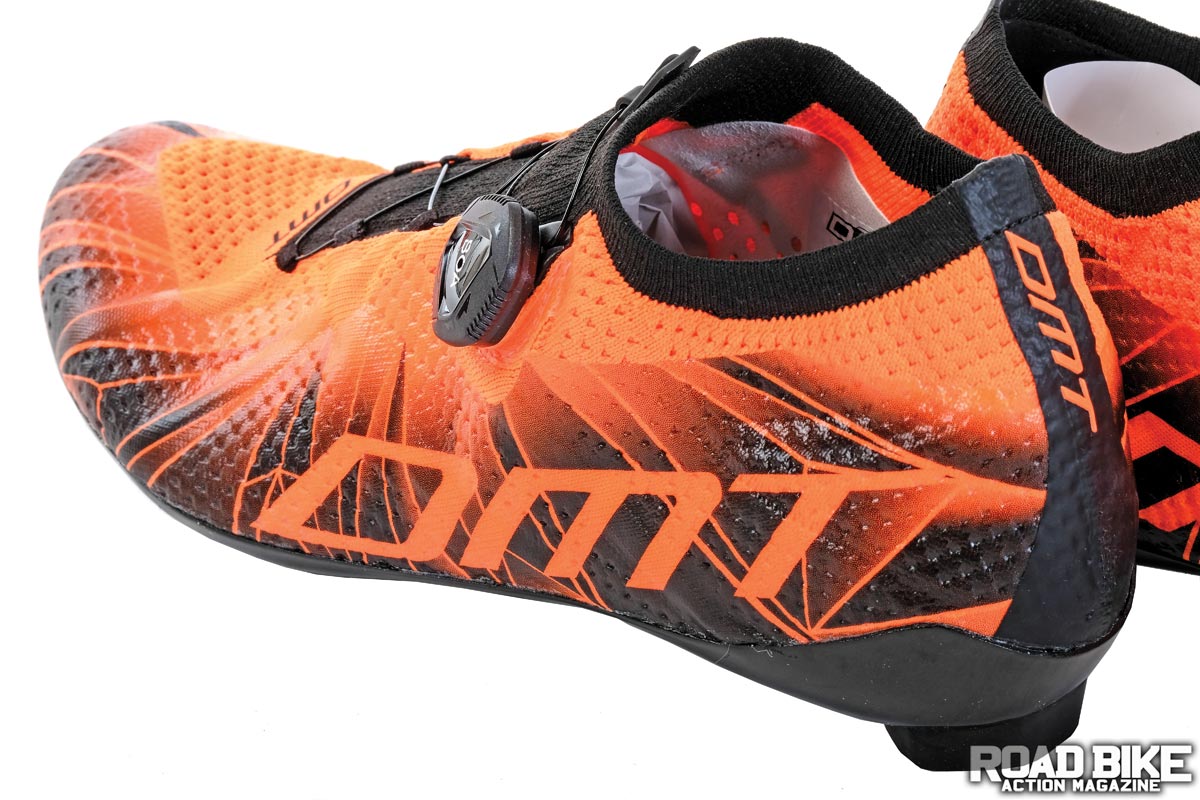 DMT: Owing to the way the upper material envelops the foot, the first thing you notice about the DMT is how difficult it can be to slip your foot inside. Although there is a small pull-tab on the tongue, it could really use one on the heel. The same can be said about taking the shoe off.

Few shoes provide the sock-like fit and feel as the KR1. Riders used to the old-fashioned feeling of toe-box closures felt at home with the DMT, more due to the compression of the knit material than the BOA, because even when the dial was at its tightest, there was still slack in the wire as it crossed the toe box. 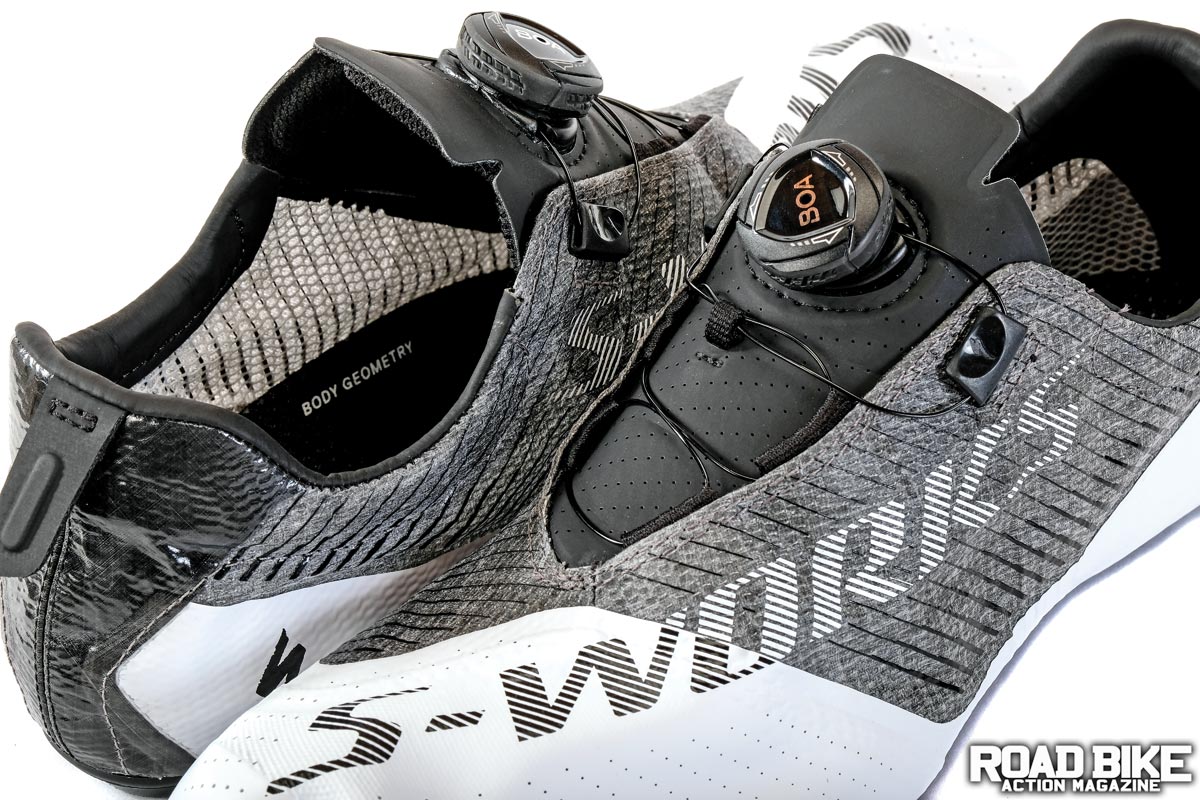 Specialized: “Wow” was the first word that came to mind when we pulled the EXOS shoes from the box. There wasn’t anyone who held the shoes that didn’t liken their lightweight and malleable feel to a pair of bedroom slippers. In fact, due to the flimsiness of the upper and lack of any toe protection, these would be the last shoes we’d choose for a gravel ride.

“Odd” was the first word that came to mind when we slipped them on. The odd sensation remained for the first dozen miles or so of turning circles. Where the initial thought is one of concern, the shoes slowly gain favor as you grow accustomed to a ride quality unlike any other shoe. You can definitely feel their difference in rotational weight.

It seems that just as the bike industry has welcomed itself into a new day of short saddles, the single closure shoe, too, seems to be working its way into being normalized. For riders who’ve spent their formative years with shoes that used multiple strap or dial closures, the single-dial shoes bring a new experience.

And for some, a common complaint about shoes that use a single closure is that the front of the foot and toe box often come away feeling unsupported due to the lack of any zonal closure system. In trying to compensate for the loose front end, we’ve ended up over-tightening the single dials, which can create an unwanted pressure point.

While this floating-toe sensation is found with the Specialized, between the routing of the BOA filament and the padded tongue, there is no pressure-point discomfort. Even when tightened, like the EXOS, the DMT’s filament wire was slack over the toe box, but owing to the thicker and more compressive material, their shoe felt like it had more upfront support.

When it comes to making split decisions between two products, we always resort to the same barometer to elicit a final opinion—which would we choose if we were stuck on a desert island? To that end, we would choose the DMT.

While the EXOS is an impressive advance in both design and technology, without a longer field test (which will come) we were left unsure about their overall durability. In a controlled racing environment where both every ounce of weight and degree of stiffness is a gift for forward momentum, the EXOS can’t be beat. This is a shoe that alters the debate about how much we can do without while still offering top-level performance.

Of course, the DMTs were heavier, but certainly not so much to be a burden. Where the DMTs felt more like a traditional shoe right from the first pedal stroke, the slipper-like feel of the EXOS continued to leave
some unnerved.

As unique as the KR1 and EXOS are, they remain equally stiff, equally expensive, equally comfortable and equally different from tradition. Both shoes include a handy carry bag, but what would be more helpful is if they included a good old-fashioned shoehorn to get them on.

Is it okay to use CO2 to inflate a tubeless tire?