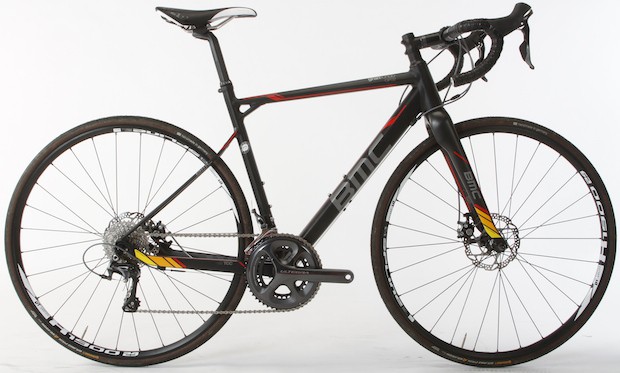 Share
BMC has expanded its range of GranFondo endurance road bikes to include the GF02 Disc, a versatile rig that can pull double-duty as a gravel bike.

We’ve been fans of BMC’s GranFondo endurance road bike platform since it was released a few years ago. Although designed for BMC’s pro riders for use at the toughest Spring Classics like Paris-Roubaix, the GranFondo series of bikes have become quite popular among those cyclists who favor more upright geometry and plenty of compliance for all-day riding. The aluminum GF02 model is a great choice for the budget-minded customer (especially since we’re advocates that, as a frame material, aluminum has never ceased to serve up all the function one requires with plenty of performance to boot). And it’s also available in a disc brake-equipped version called, you guessed it, the GF02 Disc. 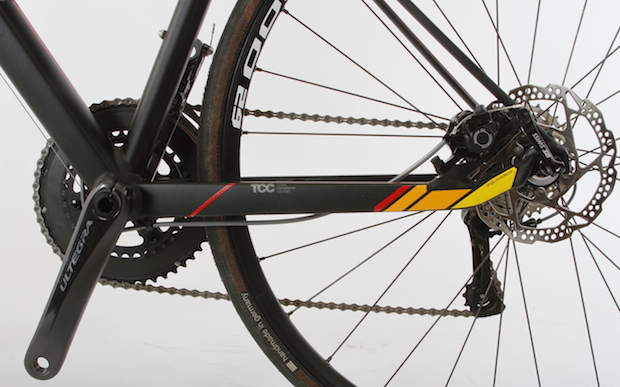 The GF02 Disc aluminum frame retains the same tube shapes that are found on the carbon GF01, but with the smaller tube junctions arising from metal construction.

THE FRAME
The GF02’s triple-butted aluminum frame comes in six sizes. Our test model is a size 51cm, and it features head and seat angles of 71 and 73 degrees, respectively, along with a somewhat relatively tall 125mm headtube. Chainstay length (from the bottom bracket to the rear dropout) is 425mm, the very same length found on all of the GF02 frame sizes from 48cm up to 61cm. The frame’s silhouette echoes BMC’s other models, with thin seatstays mounted low on the seat tube and showing off the subtle ‘kink’ that’s a GranFondo-model signature element, a gusseted seat tube junction, tall chainstays and a stout downtube. It’s paired with a carbon fork with its own compliance technology built-in, the most noticeable being the offset dropouts positioned quite forward of the fork blades. And in the name of added versatility, BMC gave the GF02 rack and fender mounts. 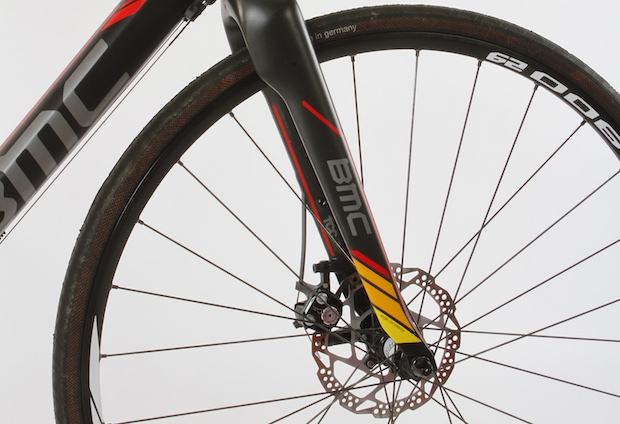 
THE PARTS
The GranFondo GF02 Disc is built with a full Shimano Ultegra 6800 mechanical drivetrain, which includes shifters and derailleurs. It comes stock with a compact 50/34 chainring combination, as well as an 11-32 cassette, which offers plenty of low gearing for climbing the steepest of gradients. The carbon seatpost is BMC’s own design, and it’s tuned for compliance and sports 18mm of offset. It’s topped with a Fizik Aliante saddle. The handlebar and stem are both aluminum and are of BMC’s own design, as well. The disc brake-specific X-1900 Spline 29 wheels are interesting in that they were designed by DT Swiss as a set of mountain bike wheels. Our test bike came with a set of size 28c Continental Grand Prix 4-Season clinchers, but the frame and fork both have plenty of clearance for much larger tires. The stock version you can pick up at your local bike shop will actually come standard with Continental Cyclocross Speed size 35c tires. The disc brake calipers are Shimano’s mechanical R-515 model and they’re mated to 160mm Shimano rotors on both the front and rear. 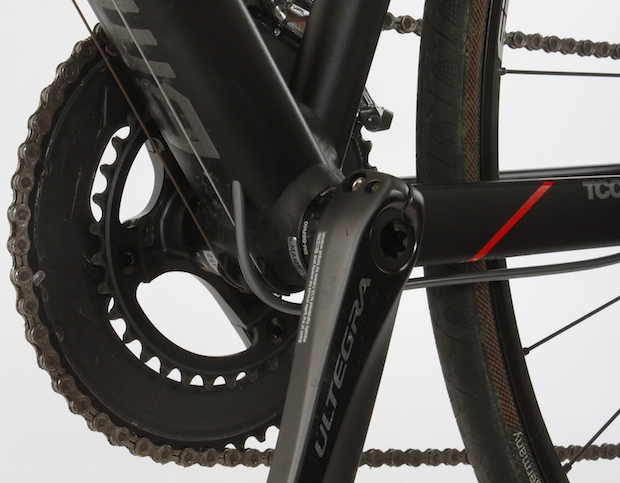 
THE RIDE
We spent quite a lot of time riding the first iteration of BMC’s carbon GranFondo GF01 and came to appreciate its fine mix of a hearty amount of compliance with enough stiffness for spirited riding. The aluminum GranFondo GF02 feels largely the same, with similar tube shapes helping give the bike plenty of compliance. Our first ride on the GF02 was a quick jaunt around the neighborhood to get our fit dialed-in, but we were able to quickly deduce that the GranFondo platform remains one of the smoothest-riding around, regardless of frame material, which is a sensation only aided by large 28c tires. Knowing that the stock GF02 comes with even larger rubber (size 35c Continental Cyclocross Speed tires), we decided to slap some 32mm Continental Gatorskin clinchers on our test bike and take it on a 45-mile gravel ride for its second outing. That ride included a five-mile dirt climb averaging 7% and a rocky fireroad descent. The gearing (which includes an 11-32 Shimano cassette) helped us get up and over some steep sandy sections, while Shimano’s mechanical disc brakes are among the best of the non-hydraulic stoppers around, giving us plenty of confidence while riding down loose terrain. 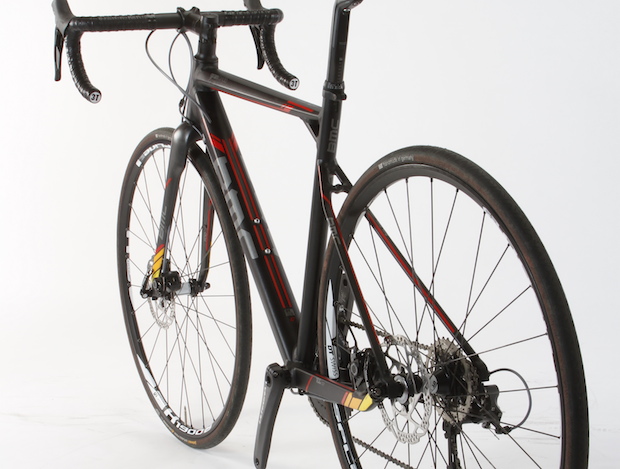 
THE VERDICT
After two rides, we’re already smitten with the BMC GranFondo GF02 Disc. Whether or not that infatuation will last remains to be seen. But what we can say now is that it appears BMC has done well in its mission to offer its customers a versatile gravel bike. The GranFondo frame, be it in carbon or aluminum, is plenty compliant for all-day riding while remaining. Copious amounts of tire clearance and a great parts selection allows for plenty of versatility. Look for a full test of the BMC GranFondo GF02 Disc in an upcoming issue of Road Bike Action magazine. To subscribe to Road Bike Action magazine, click HERE. 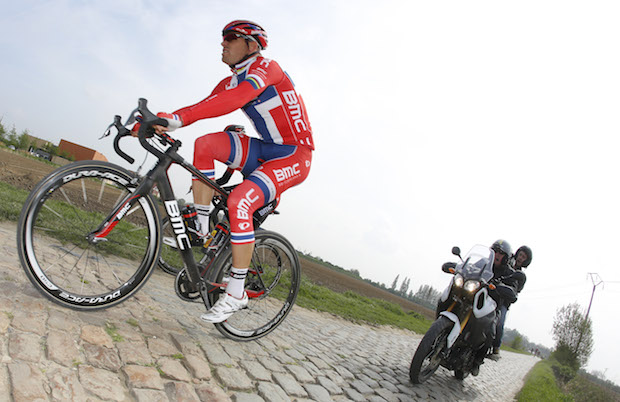 BONUS PHOTO GALLERY: BMC AT PARIS-ROUBAIX!
The original GranFondo bike was created by BMC for its pro riders to tackle the rigors of the Queen of the Classics, Paris-Roubaix. BMC riders took to the cobbles in 2014 on the latest iteration of the carbon GranFondo, including former World Champion, Thor Hushovd, shown above on a pre-race recon ride. (Photos: Bettini) 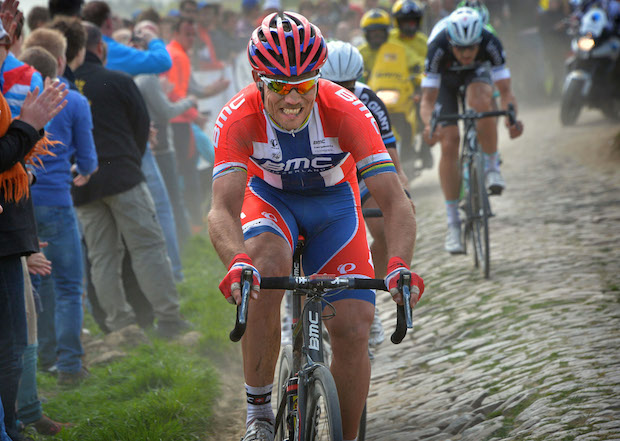 Former World Champion and current Norwegian National Road Champion, Thor Hushovd, grinds away at the 2014 Paris-Roubaix on the BMC GranFondo. 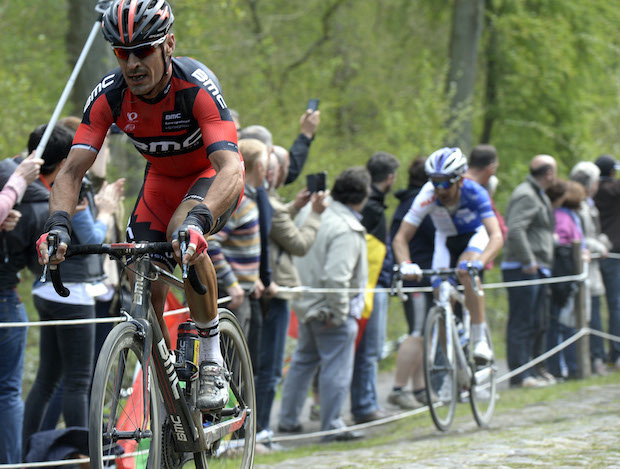 BMC rider, Manuel Quinziato, rolls through a section of cobbles at the 2014 Paris-Roubaix. 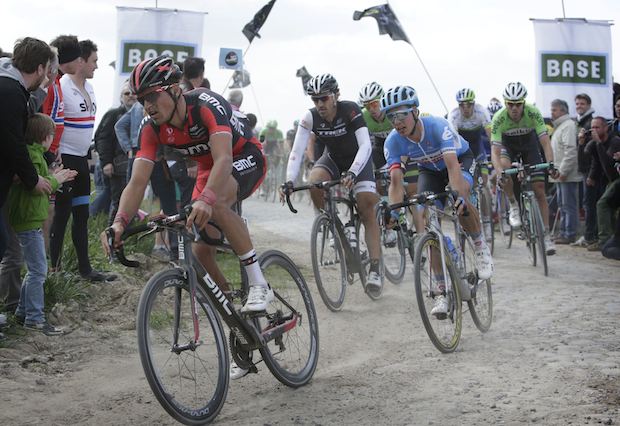 One of the pre-race favorites at the 2014 Paris-Roubaix, BMC’s Greg Van Avermaet, kept himself in a competitive position early on in the race? 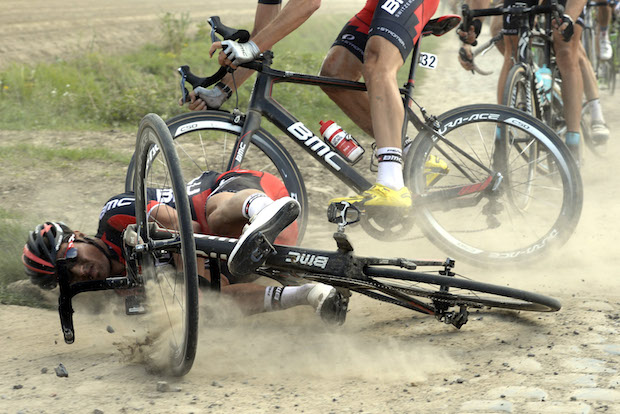 But Van Avermaet found himself on the ground later on, his Paris-Roubaix dreams once again put on hold until at least next year.
Questions or comments? Send them to: [email protected]
Follow Road Bike Action on Facebook! Twitter! Instagram!