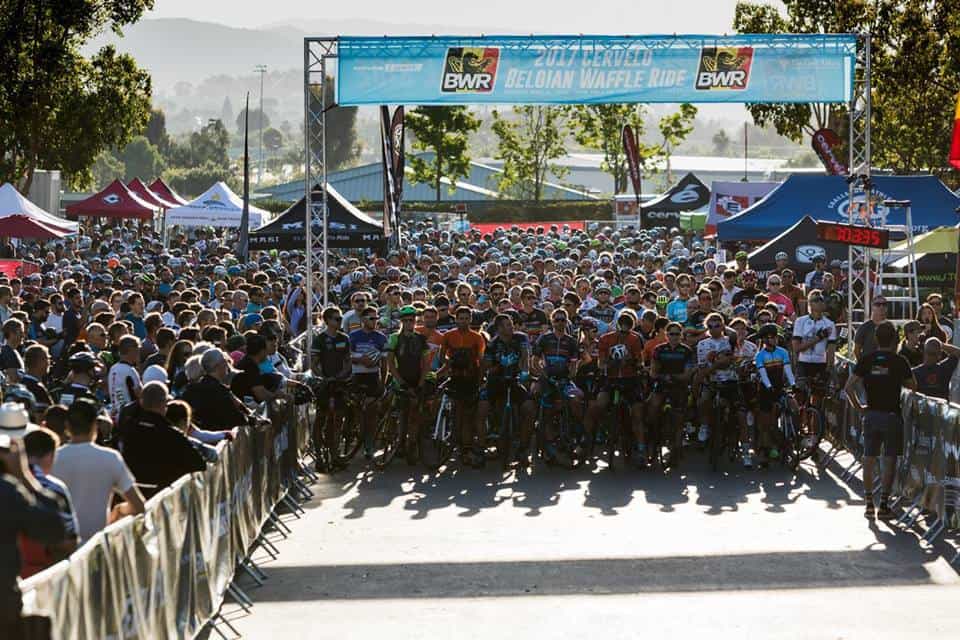 Press Release: SAN DIEGO—Oct. 26, 2017—The most unique cycling event in the country, the Belgian Waffle Ride (BWR), is back for a seventh consecutive edition of pedaling perversity with Canyon Bicycles as title sponsor. Created as an extremely challenging race in the spirit of the great European one-day Spring Classics, the BWR returns to North County San Diego on April 15, 2018. A shorter and half-as-painful Belgian Wafer Ride is also on tap, along with an expanded expo hosted by The Lost Abbey Brewery in San Marcos, California.

Racers and event patrons will again be treated to Belgian waffles, moules-frites, Lost Abbey ale, more waffles and more Lost Abbey ale on race day. The race itself promises masochistic punishment of entrants along its 235-kilometers course, which features 13,000 feet of undulating climbs and more than 40 miles of off-road terrain that harken to the teeth-rattling cobblestones of Europe’s most grueling race routes.

Most BWR competitors use modified road bikes or endurance road bikes, but cyclocross bikes, mountain bikes and even stock road bicycles are not uncommon, making the event a perfect showcase for Canyons Bicycle’s wide range of inventory.

“We are excited to partner with Canyon on our manic event,” said Michael Marckx, Monuments of Cycling CEO and BWR creator.  The incredible excitement around Canyon’s August launch in the U.S., here in San Diego, and their tenure at the forefront of engineering, design and quality assurance in cycling, make them the perfect partner to take BWR to new extremes.”

Blair Clark, Canyon U.S. president said the following: “The Canyon Belgian Waffle Ride will be an ideal event for Canyon to showcase their variety of bikes perfect for the back roads of San Diego, or whatever twisted courses your heart may lead you on. The BWR, or ‘Hell of the North County,’ is not just an extraordinary race. It’s a celebration of life, how much can be accomplished on a bike, and the magical connections that develop between people who suffer together (s)mile after (s)mile.”

This year’s BWR will have the deepest field of professional riders in the event’s history, and an expansive list of hungry amateur riders drawn to the unique opportunity to race alongside many of cycling’s heroes. The expo at the Lost Abbey Brewery over the race weekend is an equally big draw, promising to be the largest cycling party of the year in San Diego. Festivities kick off on Saturday, April 14, and are open to the public. A variety of craft beers reflecting the monastic brewing traditions of Belgium are a featured attraction, and attendees can peruse a wide range of offerings from event sponsors, test ride Canyon bikes and people watch in Belgian bliss.

“We are so lucky to partner once again with our friends at The Lost Abbey, who will be hosting the ride start, its finish and BWR’s expanded two-day expo,” said Marckx. “Keeping up with tradition, we will continue to support the Challenged Athletes Foundation® and task ourselves with devouring massive piles of Belgian waffles from our friends at Gear Grinder Grill, coupled with frosty glasses of special-edition Lost Abbey Belgian Waffle Ride Bad Ass Ale. As a cyclist and family man myself, I am excited to see our community of cyclists come together in such a fun and edifying way. As an American with Belgian heritage, the promise of waffles, frites and somewhat responsibly consumed Trappist ales is tantalizing.” 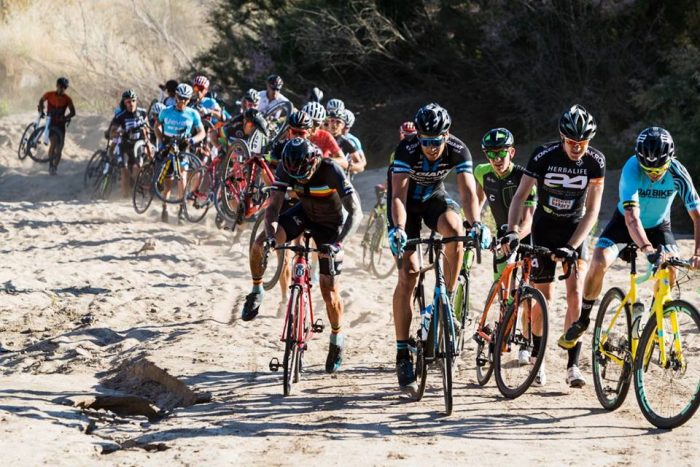 On April 14, one-day prior the event, The Lost Abbey hosted BWR Expo runs from 10 a.m. to 8 p.m.; and on Sunday, 5 a.m. until the end of the event’s ceremonies. Riders must pick-up their entry packets during expo hours Saturday, where they are invited to enjoy the massive fête around them. The expo will remain open on Sunday throughout the duration of the event until the beers, jeers and awards are distributed for heroic efforts and lack thereof.

Race day events kick-off at The Lost Abbey at 5 a.m. on Sunday, April 15, with catered breakfast for participants, replete with fuel-sized portions of authentically prepared Belgian waffles. There will also be a viewing party of the Amstel Gold race that morning at the Lost Abbey. Pain and suffering will commence at 7 a.m. and will feature four waves. The Wafer Ride will begin after the BWR waves.

This year a King of the Canyon competition is also added to the event in celebration of its new title sponsor, while the other categories—General Classification, King/Queen of the Mountain, King/Queen of the Dirt, King/Queen of the Sprints, Hardman/Hardwoman and the most spirited kUDOs award in honor of Udo Heinz. We will once again offer a team competition, where there will be three categories: male, female and co-ed. Teams of four or more will compete with the top-four riders of each team combining their times for one finishing time.

Registration will open December 1, 2017 and is expected to reach its limit quickly. Entry fee is $160 for the full Canyon Belgian Waffle Ride and $125 for the 68-mile Belgian Wafer Ride. Proceeds from registration fees will help support the Challenged Athletes Foundation® (CAF), whose mission is to provide opportunities and support to people with physical challenges so they can pursue active lifestyles through physical fitness and competitive athletics.

For more information about the Canyon Belgian Waffle and Wafer Rides, go to https://www.BelgianWaffleRide.Bike or https://www.facebook.com/Belgianwaffleride.

Video: Gravel Ride With Neil Shirley and Guðberg in LA