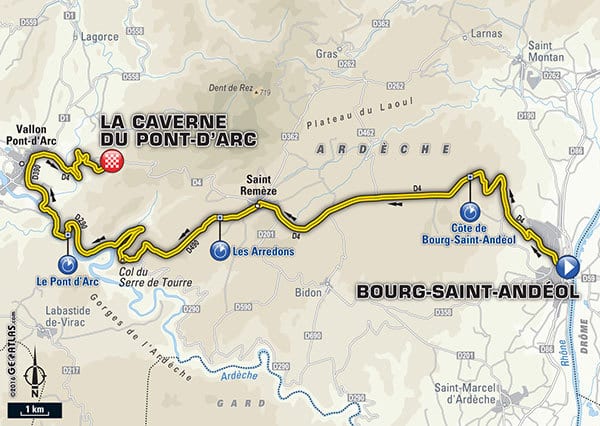 Bourg-Saint-Andéol / La Caverne du Pont-d’Arc
There is a lot at stake for the first time trial of the tour.

Situated on the shores of the Rhône, the common is used to cycling races. The pack gathers there at the beginning of the season for the start of the Classic Sud Ardèche. During the 2015 edition of the race, Argentina’s Eduardo Sepúlveda had captured the win. Little did he know that five years earlier one of his compatriots had triumphed in Bourg-Saint-Andéol: sprinter Juan José Haedo had indeed claimed a stage of the 2010 Critérium du Dauphiné.

Well before the wheel was invented, prehistoric men expressed themselves on the walls of the Chauvet grotto, drawing animal representationsamong the oldest and the best preserved. It is considered as the first ever art gallery in the world (36,000 years old). The Caverne du Pont-d’Arc is a replica of the grotto opened to the public. Close-by, Vallon-Pont-d’Arc remains in the mind of Jérémy Roy who had won a stage of Paris-Nice there back in 2009.

Distinctions: Chauvet-Pont d’Arc is a UNESCO World Heritage Site, the Ardèche Gorge is listed as one of the Grands Sites de France

Department’s slogan: “The scent of the Ardeche is in the air”