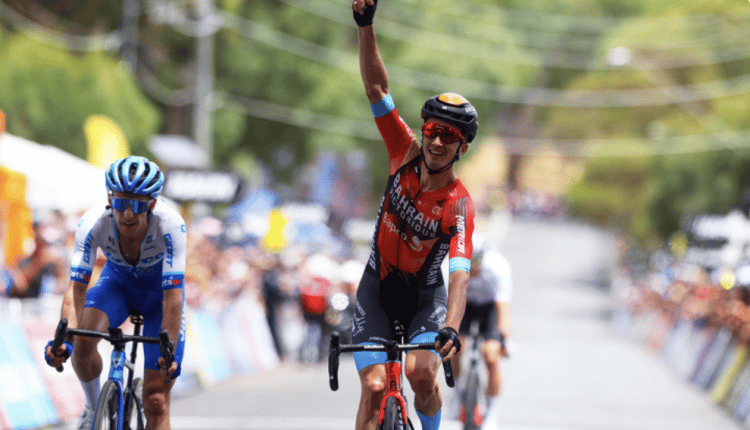 Spain’s Pello Bilbao conquered the demanding Corkscrew climb to win the third stage as Australia’s Jay Vine seized the overall lead in the Tour Down Under on Friday. Bilbao (Bahrain Victorious) prevailed up the final climb to beat Britain’s Simon Yates (Jayco-AlUla), with Vine taking third to grab the ochre leader’s jersey with two stages left. Vine (UAE Team Emirates) leads Bilbao overall by 15 seconds. Yates, the 2018 Vuelta a España winner, is 16 seconds down on the leader.

“The stage win was the main goal for the team,” Bilbao said.

“It was a short climb and a fast descent, but I had some difficulties to reach Yates and Vine.

“I was a bit disappointed yesterday so today I was really focused on the stage win.”

Vine has a first World Tour race victory in his sights after winning two stages at last year’s Vuelta a Espana.

“If they gave me another three more Corkscrews I would be fine, there is a lot of road to come before Sunday evening so I definitely have to be conservative,” Vine said.

“I knew Bilbao was fast there at the line, but I just couldn’t get around him,” Yates said.

“The way Jay is climbing he is looking very strong. We will see what we can come up with on Sunday.”

Overnight leader Rohan Dennis (Jumbo-Visma) tumbled out of the reckoning when his bike’s gears stopped working as the peloton hit Kersbrook, just miles out from the second key climb of the day at Checker Hill.  Australia’s two-time world time trial champion had to change his bike and the effort trying to catch up the peloton took its toll. Dennis was never in contention on the key Corkscrew climb towards the end and is now 1:25 off new race leader Vine heading into the weekend.

After Friday’s series of climbs, the penultimate stage on Saturday from Port Willunga to Willunga Township over 83 miles will be one for the sprinters.

TOUR DOWN UNDER STAGE 3 RESULTS