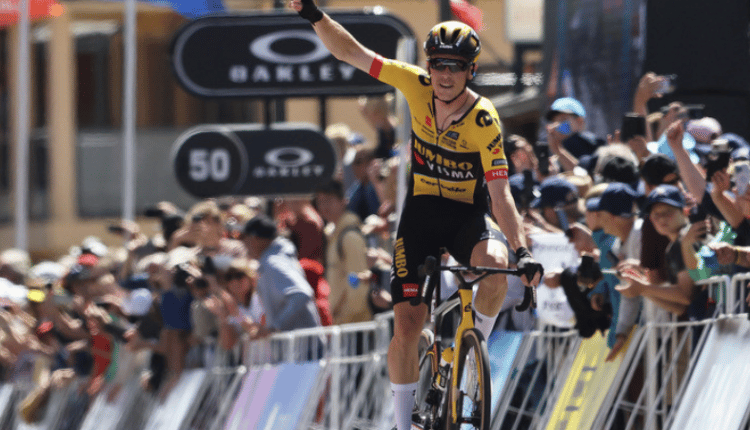 Australia’s Rohan Dennis (Jumbo-Visma) powered to win the second stage and seize the overall lead in the Tour Down Under as his rivals came to grief on Thursday. The two-time individual world time trial champion surged over the line at the head of a five-man breakaway to win the longest stage of the World Tour race, the 90 mile ride from Brighton to Victor Harbour.

The bonus for his stage win came on the back of setbacks for overnight leader, Italy’s Alberto Bettiol (EF Education-EasyPost), and Australia’s Michael Matthews (Team Jayco-AlUla), who have dropped out of general classification calculations. Bettiol came to a dead stop with cramps in his right leg, while Matthews lost valuable time with a chain issue and had to wait for a replacement bike while the peloton charged on up Nettle Hill, 12 miles from the finish.

Dennis, receiving word on his team radio, fully capitalised and dashed past Australia’s Giro d’Italia champion Jai Hindley (BORA-hansgrohe) inside the final mile to claim the stage and the leader’s ochre jersey.

“That was a lot of work for a few seconds in GC (general classification),” said Dennis, the 2015 TDU winner.

“I just battled over the climb to get across to Jai Hindley and Simon Yates.

“From there it was just a battle and I was hoping Yatesy wouldn’t attack because he had sat on before helping us in the final five kilometres.

“I didn’t expect to go to the (finish) line. I thought it’d be hard over the climb and it’s a tricky run-in too, so hard for teams to control it.”

It was a massive turn-around for Dennis’s Dutch Jumbo-Visma team, after its captain Robert Gesink suffered a fractured pelvis in a heavy fall during Wednesday’s opening stage.

Pre-race favorite Matthews’ mishap at the base of the decisive climb with about 11 miles to go came as he was chipping away in his bid for the leader’s jersey with time bonuses. He was fuming after the race at his misfortune, which has plunged him from second to 58th in the GC and out of race contention.

“I was in a good position, the team rode really well all day, got two good intermediate sprints and got some time back on the GC guys and we got to the final climb,” Matthews said.

“I don’t know what’s happening with cycling these days, there’s no respect in the bunch.

“I was in a great position. I got hit from one side, hit from the other side and my chain got stuck between the frame and the front crank and I couldn’t get it out.”

Bettiol ended the day just in front of Matthews in the GC in 57th spot. The peloton go into Friday’s third stage, the 72.5 mile Norwood to Campbelltown leg, featuring the notorious Corkscrew climb.

TOUR DOWN UNDER STAGE 2 RESULTS