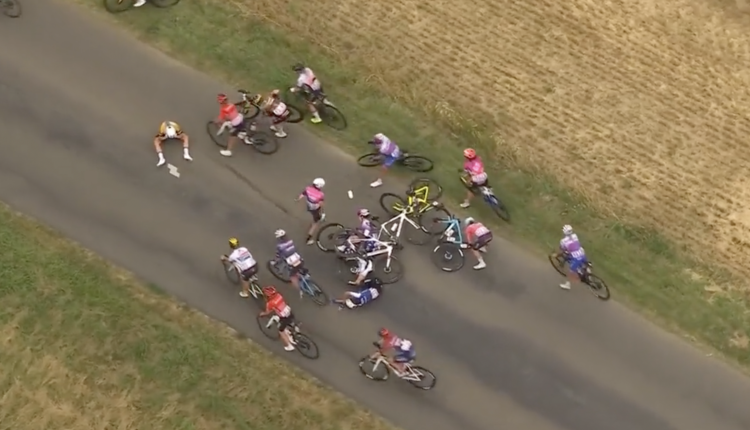 Marta Cavalli, winner of this year’s Amstel Gold Race, La Fleche-Wallonne and a potential winner of the
overall title at the Tour de France Femmes was taken to hospital after falling in one of three nasty crashes over the last 20 miles of racing during stage 2 where crosswinds and gusts of up to 25mph made the riders jumpy about the prospect of a break in the peloton.

“We don’t have much news from Marta, she is suffering from a head injury,” said team manager Stephen Delcourt on arrival in Provins.

“We remain in contact with the doctor. She has been sent to the hospital to carry out a CT scan as a priority.”

The FDJ-Suez-Futuroscope rider was already on the ground when she was hit by Australian champion Nicole Frain who came flying through without braking. Cavalli, who was runner-up on this year’s Giro d’Italia, climbed back on her bike but failed to finish the stage with the team pulling her out and sending her to hospital.

“She suffered a big shock. We didn’t want to take any risks,” said Delcourt.

FDJ-Suez-Futuroscope released a statement after Cavalli’s examination revealing that the “findings were reassuring and have not indicated any further injuries or fractures. Marta remains under medical supervision.”